One Day is a relatively short novel but it is a special novel due to the fact that all 139 pages are describing one day in a labor camp. Alexander Solzhenitsyn, the author, writes mostly from his own experience in various prison and labor camps, or gulags. He was sentenced eight years because he criticized the harsh Soviet leader Joseph Stalin.

The book starts out with the morning reveille where we meet the protagonist, Ivan Denisovich Shukhov. He usually is the first one out of bed and has 90 minutes to himself, but today he is sick and he decides he can rest a little bit longer, thinking that a nice guard was on duty.

Don't use plagiarized sources. Get your custom essay on
“  One Day in the Life of Ivan Denisovich ”
Get custom paper
NEW! smart matching with writer

He was mistaken. He is forced to clean the guard house, which a mild punishment compared to other punishments he mentions later in the novel. He is quick to finish the job and hurries to the mess hall so he does not miss out on breakfast. He then goes to the “sick bay” to get his fever checked out but his temperature is not high enough to get him off work.

Proficient in: One Day in the Life of Ivan Denisovich

Every morning, the prisoners are lined up in the cold and are searched and counted. If anything forbidden is found on them, the are sent to solitary confinement or “the hole” as they call it. Buynovsky, an inmate, was sent to the hole for ten days for wearing a flannel vest. Shukhov had nothing on him.

Shukhov’s group, gang 104, was marched out to work at the power station.

Shukhove describes the men he works with and also tells of the respect he has for his foreman, Tyurin. He also takes kindly to Gopchik, the teenage inmate, and teaches him many things that will help him out in the future as an inmate.

At noon, they receive their noon meal of kasha. They also manage to trick the distributor into giving them two extra helpings. Tyurin gets one of the extra helpings and then he decides that Shukhov should get the second. Once he finishes eating this he takes Tsezar’s helping to him hoping that Tsezar would not want it and give it to him to eat, but Shukhov was already full from the two helpings he had recieved. After their meal, they return back to the work site and he spots a piece of scrap metal in the snow. He picks it up and plans on creating a knife out of it later. His team starts to brick lay walls at the power station. Everybody works hard to get as much done before the last meal of the day. The hardest worker is, by far, Shukhov. He works so hard because when he is working he feels free. He works so hard that he ignores the call back when all of the men leave. When he is done, he wants to hurry back, but first he has to hide his trowel. To any other person, a trowel would seem unimportant, but to Shukhov, having a good trowel meant he could work well and it reminded him of his working days before he was imprisoned. He catches up to his group because they were delayed due to a body count.

He abandons his earlier intentions to go to the sick bay and decides that he would rather eat supper. During the body search, he remembers the steel he had hidden in his mitten and prays that he does not have to go to solitary. But by a stroke of luck, the guard does not find this piece. Then he moves on to supper where he is rewarded with 400 grams of bread for his outstanding work at the power station. He eats as if he is in paradise, but he always keeps an eye on his extra rations so nobody takes them. Once supper is done, Shukhov prepares for bed and enjoys the company of his extra bread. The second count was called and Tsezar panics about his parcel and Shukhov decides to help him hide it. Tsezar decides to give him two biscuits and a sausage for helping him. After the body count, he thanks God for helping him survive another day and states that 3,653 days have passed since his sentence started.

Ivan Denisovich Shukhov is the poor and uneducated prisoner who is the protagonist of the story. The Author chose to use the name Ivan because it is a very common name in russia and it was supposed to symbolize the common russian. Throughout the novel, Solzhenitsyn shows how strong russian peasants can be when faced with degradation and his ability to adapt to life at the gulag. He has managed to make his presence at the camp a bit more meaningful. This was, I think, meant to give hope to the everyday russian man that nothing was to difficult to get through. Also it seems as if he is in charge of his own world. He eats what he gets and is gracious for every gram. He works hard and works more than the other men. He enjoys it so he does more of it.

Tyurin, the foreman of gang 104, shows the reader that every person, no matter how tough they are, there is always a soft side. He starts out as a tough leader who is associated with punishment but once he tells the story of his imprisonment, the men of the 104th look at him more as a comrade than a ruthless leader.

A theme which is immediately present at the beginning of the book is survival. Men had to endure the frigid siberian wind and live off of food that had barely enough nutrients in it for them to survive. Then the law of the taiga is mentioned which simply says that, due to the the harsh weather, you will die. Men can try to escape from the prisons but if they successfully escape, they will die in the frozen barren wasteland of Siberia, otherwise known as the taiga. They also need to survive mentally from the degradation the guards serve out everyday.

One Day in the Life of Ivan Denisovich. (2020, Jun 02). Retrieved from https://studymoose.com/one-day-life-ivan-denisovich-new-essay 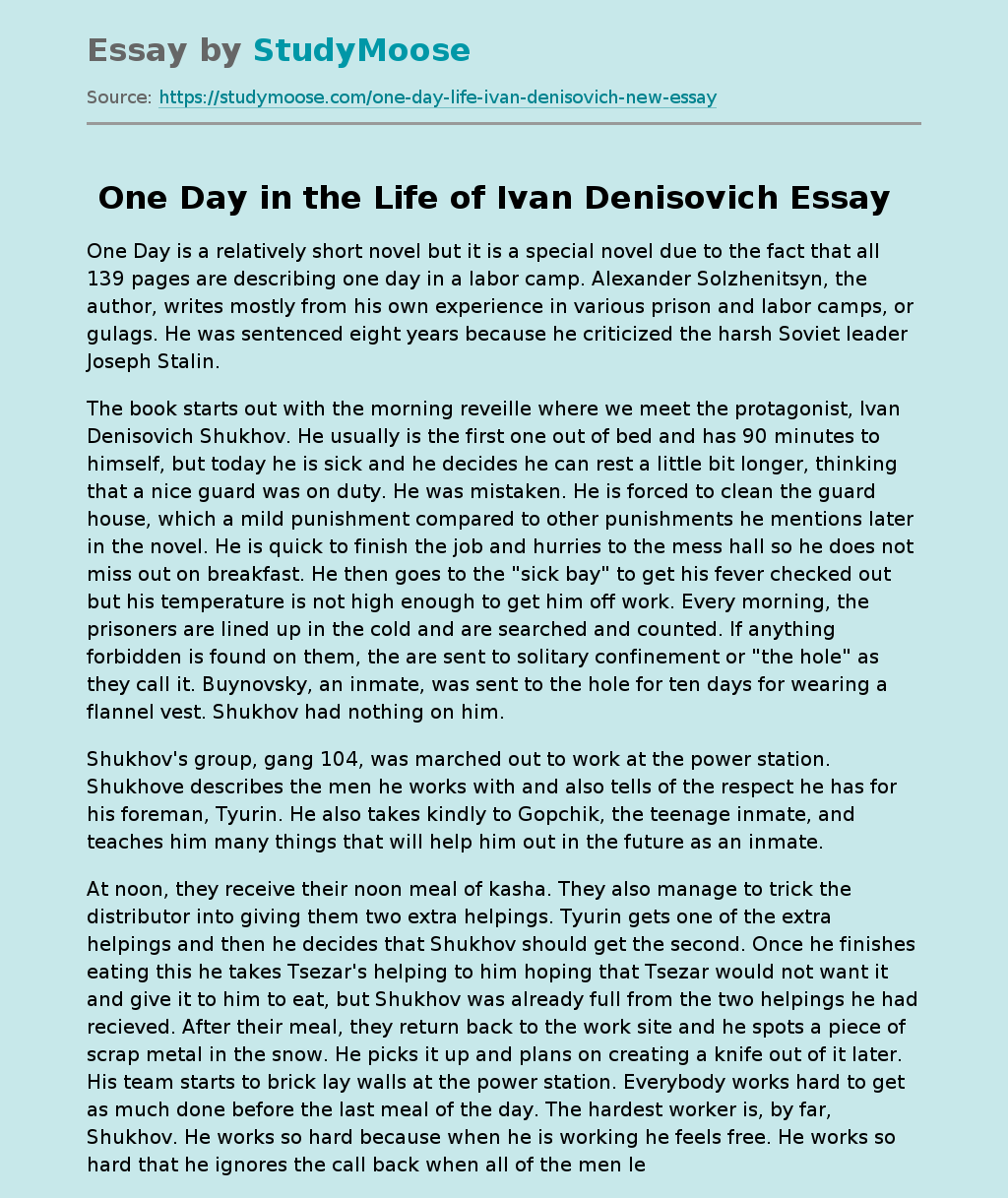