One Amazing Thing by: Chitra Divakaruni

It was first published in the US in voice by Hyperion in 2009 and later published by Penguin books India February 2010. The book also has 240 pages. Chitra B. Divakaiumi is an award winning author poet. Her work is widely known, as she has been published in over 500 magazines. Including Atlantic Monthly and The New Yorker, and her writing has been included in over 50 anthologies. She was born in India and lived there until 1976. At which point she left Calcutta and came to the United States.

Don't use plagiarized sources. Get your custom essay on
“ One Amazing Thing Book Review ”
Get custom paper
NEW! smart matching with writer

A young woman Uma, sits in the waiting room of the India passport office. She starts to get very impatient, and she entertains herself by observing the other people in the waiting room with her. Everyone has a reason of why they want to enter into India. In the waiting area their waits an Africa American war veteran Cameron who takes charge, but some are unhappy about it. A Muslim names Tariq.

An upper class Caucasian couple that really don’t get alone. A Chinese grandmother with a secret past, and her granddaughter, two visa office workers on the verge of and affair Malathi and Mr.

Mangalam, and Uma. As they all set in the waiting area Uma starts to feel a little rumbling and that when the earthquake strikes. When everything settles down, there were some major injuries as well as some minor injuries. People started to go into survival mode, as there is little food to eat. The office starts to flood.

So emotional stress seems to much for everyone to handle as they wait to be rescued or die. So that’s when Uma comes up with everyone telling “One Amazing Thing” , about themselves because she believes that no one can go through life without encountering at least one amazing thing.

So everyone begin to tell one amazing thing that they have never told anyone before. With One Amazing Thing everyone discover so much from each other as well as their selves. Elderly Caucasian couple Mr. and Mrs. Pritchet going through a difficult time in their marriage, an Indian-Muslim man Tariq who is disillusioned and angry with the new US, as Chinese lady Jiang who loved and lost a man in her younger days, her granddaughter Lily, a middle age army officer haunted by his guilt Cameron, Malathi a visa officer who is engaging in a affair with her boss, Mr.

Mangalam on the verge of an extra-martial affair, an Indian-American student Uma, who is confused by her parents decision to return to Kolkata after living in the US for over 20 years. The plot focuses on a group of strangers who are trapped in a visa office. Most customers even some staff have come and gone, but nine people remain in the office. When an earthquake rips through the afternoon, trapping these nine characters together, their focus first is to survive through the struggle. There is a little food from which came from what people had. The office begins to flood, and everyone starts to panic and get really scared and frustrated.

So when the emotional stress seems to be to much for them to bear, the young lady Uma tells them to tell a personal tale about them that no one knows about “One Amazing Thing”, from what they have been through in life. So all of their stories from the romance, self-discovery, family, etc. This novel really proves the power of a lot of stories and the meaning of us as human’s expressions itself. In my opinion the book “One Amazing Thing”, is an engaging book because it reinforces the idea that all of us are different and unique in our own ways, and that we all have stories of our lives that may be interesting or not to tell.

We all can connect to this book or see one another if we are willing to take the time out to listen to people. Because everyone has a something to tell, and amazing is not always positive words. But describes something that might have changed a life, or the course of someone life. Some of the stories are very heart breaking, but all of them paint a picture in some way of the characters and why they may be who they have become. 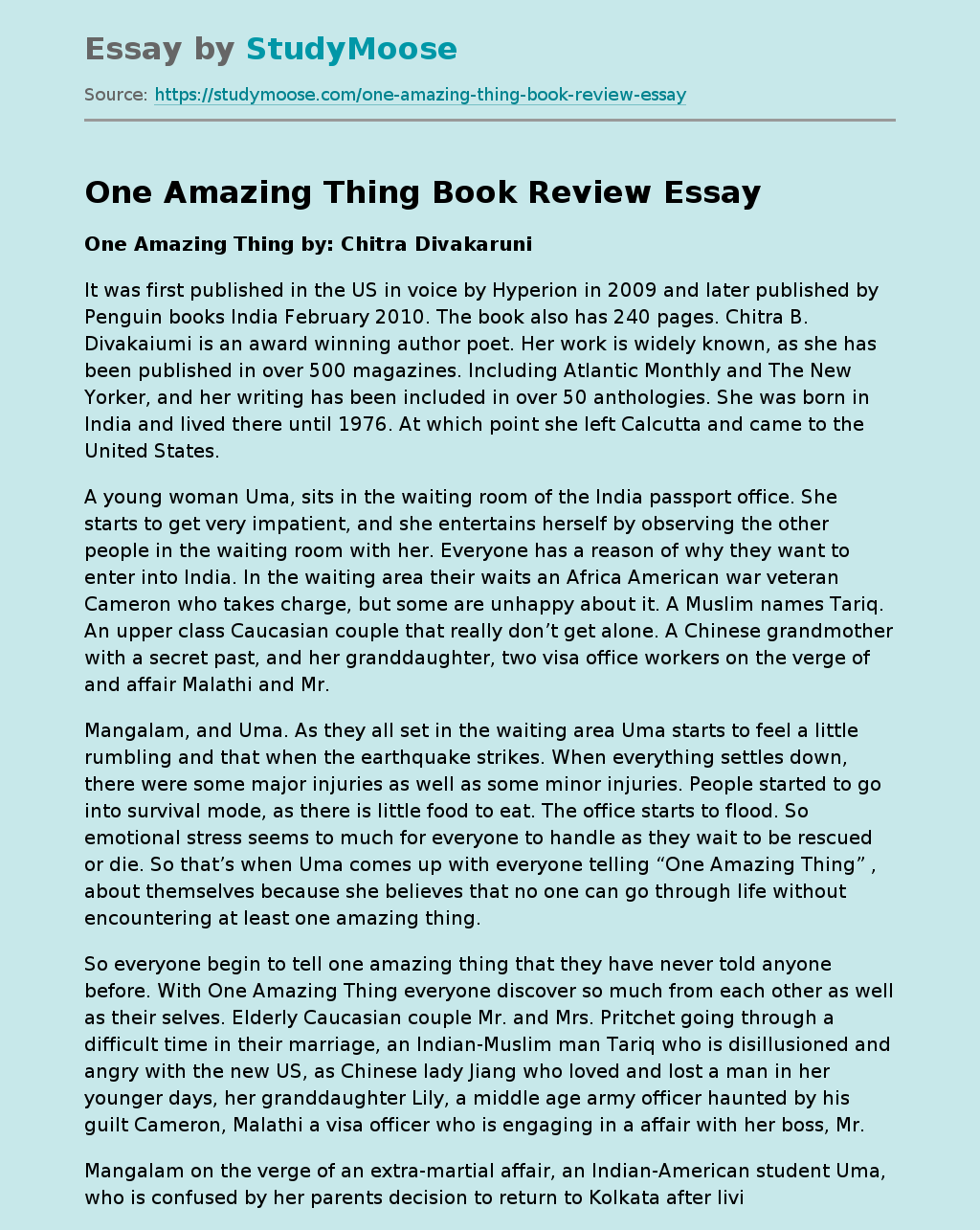