Once Upon a Time

‘Once Upon a Time’, was written by Gabriel Okara, who is a Nigerian poet. He often explains what happens when a traditional African culture meets the forces of the Western way of life. I think the poem was written to outline the fake personalities of many people and to try and get them to return to a natural and innocent state. The poem tells of the conversation between what seems to be a father and son, where the father wants to learn from his son how to go back to normality and no longer be fake.

Don't use plagiarized sources. Get your custom essay on
“ Once Upon a Time ”
Get custom paper
NEW! smart matching with writer

The poem starts by the father telling his son how, ‘once upon a time’, people, or ‘they’, ‘used to laugh with their hearts’. I think that the word ‘they’ refers to western people who are white. Also this description gives the impression of genuine emotion given off by the people. He then moves on to say that now they only, ‘laugh with their teeth, while their ice-block cold eyes search behind his shadow’.

This gives off very negative, fake and false feelings and it is a very cold description. This affects the tone of the poem that now becomes sinister and bitter.

This shows that, again the people are fake and seem to be using the man to see what they can get. Poem Stanza Four Presents the Adaptations and Solutions. Stanza three then goes to explain more about the changes he has noticed in these false people.

Again the Stanza starts positive with the phrases, ‘feel at home’, ‘come again’, but then goes on to say that he will come again, ‘once, twice’ but there will ‘be no more thrice’ for then ‘I find doors shut on me’. This shows that the people lie when they say the positive phrases and after a few visits they have all that they want from the man; their falseness is reflected in the language they use. The first three Stanzas have the same structure. They start by telling the past and explaining how things used to be, but then they tell the negative reality.

I think this is used to compare the times and introduce the reader to the situation. Stanza four presents the adaptations and solutions that the man has found to counter the problems. It starts by saying that the man has, ‘learned many things’, already suggesting that he has changed to fit in. He then explains the things he has learnt. He tells of the false personalities or of his ‘many faces’. He tells that he has learnt to ‘wear’ these faces, suggesting that he wears faces for different situations.

For example, he says he has an, ‘office-face, street-face, and host-face, proving that he acts differently under different circumstances. He then adds that they have, ‘conforming smiles, like a fixed portrait’. This suggests even more falseness and changes. Poem Stanza Five: Learned to Laugh With Only His Teeth. Stanza five of the poem tells of the fake attributes to go along with the fake looks. It also repeats some of the acts that were mentioned earlier in the poem. Repetition seems to be a key technique in this poem. He says that he has also, ‘learned to laugh with only his teeth’ and ‘shakes hands without his heart’.

This suggests that he has copied the western ways as this is what they did earlier in the poem. He then goes even further by saying he has learned to say, ‘Goodbye’ when he means, ‘Good-riddance’ and ‘Glad to meet you, without being glad’. I think that the man is ashamed of himself and is confessing to his son how far the fake attitudes have developed, he seems to hate what he has done. Stanza six and seven then show the man showing his regret as he says, “I want to be what I used to be when I was like you”, showing that he wants to be honest and truthful again. 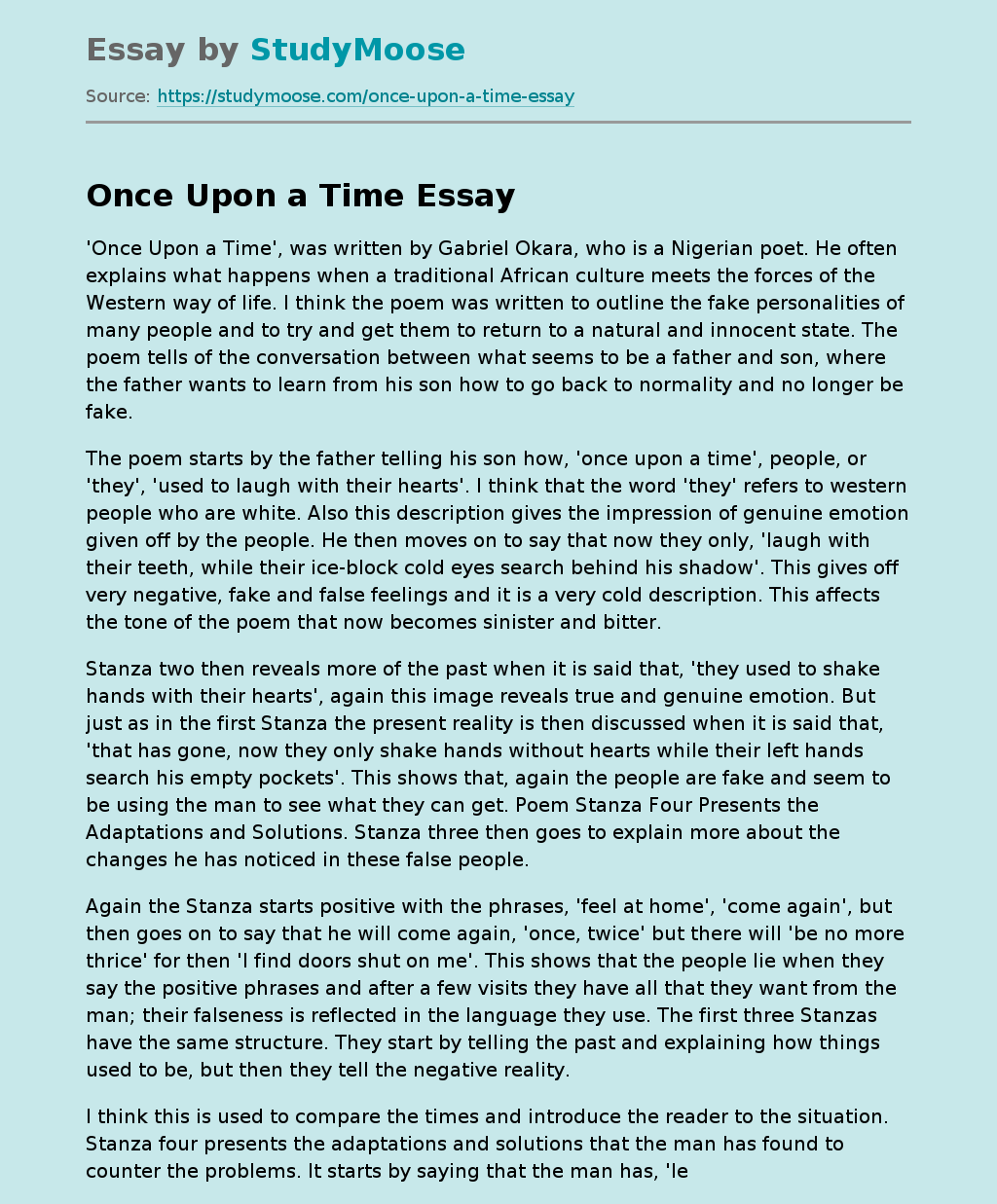