On the amtrak from Boston to New York City

The situation of the poem is described in the title “On the Amtrak from Boston to New York City,” was about a white woman and a person with a Native American background who were on a train together. What was being taken place when the speaker is meditating about the “white” woman they were having a conversations with other passengers, including an older white woman about the brief history of the city as they pass landmarks of the Native American Culture.

Don't use plagiarized sources. Get your custom essay on
“ On the amtrak from Boston to New York City ”
Get custom paper
NEW! smart matching with writer

The subject of the conversation had to do with the frustration the man had with the woman being ignorant about what land was taken away from him and his ancestors. He had brought her orange juice because it was stated right after in the next sentence he respects all elders it could have been out of kindness. That shows that the character is being bigger than himself he himself knows that being rude to this woman will now solve anything.

The idea of Don Henley really made Alexie mad do to the fact that Native Americans inhabited the lands long before anyone else. Throughout the poem Alexie continues to talk to himself and use profanity whenever the white women would bring up the “white” men. For instance, when the woman asks him about Walden Pond. He says, “‘I don’t give a shit about Walden. I know the Indians were living stories around that pond before Walden’s grandparents were born…” Using profanity here represents Alexie’s outrage at the woman’s ignorance.

He continues: “I’m tired of hearing about Don-fucking-Henley saving it, too… If Don Henley’s family hadn’t come here in the first place then nothing would need to be saved.” Again, the use of profanity shows Alexie’s anger as a Native American whose family had been pushed out of their land.

The perspective the speaker makes his judgment about the historicity and values of Thoreau’s Pond from first person from his perspective. The speakers opinion of what he thinks of the “white” history is that his peoples stories and land were taken away from them they were over powered by the white man and were not able to continue there history. Along with what they had created historically the white man would take credit for it.

The poem “On the Amtrak from Boston to New York City,” by Sherman Alexie was about a white woman and a person with a Native American background who were on a train together. This is an interesting poem, because it provides a new outlook on our country as it is today, from a Native American. Alexie appears to wish other races would leave his country. He refers to all other races as, “the enemy” and believes his biggest challenge every day is simply dealing with “the enemy.” Due to all that happened to the Native Americans in the past Alexie believes his people were treated harshly, which I agree with.

“Blue Winds Dancing” The story tells of a young Native American’s struggle with growing up in America. The struggle of the character exists because of the ancient Indian thought conflicting with our American expectations. The attitudes the speakers expresses are frustration or anger and how they both wish they could have there home back but it was taken away by the “whites.” For blue winds dancing the internal monologues as the narrator searches for his identity and copes with society, respectively. As for “On the Amtrak from Boston to New York City” the internal monlogues is expressed through frutration from the whites taking away land.

It does not seem hard to understand the basic theme that is present in “On the Amtrak from Boston to New York City” by Sherman Alexie. Many Native Americans today are forced to assimilate into the American culture leaving behind their traditions and values in order to be successful in America. If they do not become Americanized many Native Americans struggle to survive on reservations. Sherman Alexie portrays the bitterness for having to put his traditions aside perfectly in my mind. Although I will never receive the treatment the he or his ancestors have, I can still understand his pain. He is being “forced” to be someone he is not, which everyone has to do at some point in his or her life.

It is not easy for a person who considers himself a full-blooded American to relate to a Native American who lives in a country that is full of people who’s ancestors basically wiped out your entire civilization. I can understand what he is going through somewhat. He is stuck in this country, this is his “home” weather he likes it or not. Obviously, things will never be like they were before the first settlers landed. The setting of the poem, an Amtrak train for Boston to New York, I believe is very significant. The New England Area, especially by Walden Pond in Massachusetts is near where the firsts settlers land. It is the site of our civilizations beginning and the Native American civilizations end. It was the site of the beginning of the end for the natives of what today is the Untied States of America. Its one of the biggest tragedy’s the world has ever seen. Some their traditions however, are still possessed by today’s Native Americans.

They are however being threatened by today’s culture which is dominated by material items. Many Native Americans are leaving the reservations and some of their traditions behind in search of jobs to support themselves and family. The main character of the poem seems to be sick of attitude. He is sick of Americans who ignore the history of those who were there before them. This is evident throughout the poem. They main character is very influenced by his heritage. He would not have such strong thoughts on the train about the American historical objects being pointed out by the woman. It seems to me that this man wants nothing to do with America and its history.

However, he can’t get away it. American culture consumes his everyday life. He has to not be himself very often. He has to act fake to appease those around him. I like many others in this world have been guilty of this same act. This character is perfectly politically correct. He tries not to confront anyone, which is not a bad trait. Unfortunately, that is not who he really is. However, his Native American upbringing has instilled in him a deep respect for elders. A characteristic that our culture lacks teaching to its young sometimes. He, like many of his kind, is very honorable and respectful of those who deserve respect.

“On the Amtrak from Boston to New York City” was honestly one of the best poems I have ever read. It is about a subject that I have not put much thought about. However, after reading this piece I will put a little more thought into the subject to try to put myself into the shoes of a Native American trying to live in America. This is their “home” but it’s not really their home. That is the way I see it. Many are forced to live lives they are not supposed to live. Many struggle everyday to survive to keep their culture alive. This is a struggle they are losing. Many Native Americans are forced to leave the reservation in search of better education and a better life.

On the amtrak from Boston to New York City. (2016, Aug 05). Retrieved from https://studymoose.com/on-the-amtrak-from-boston-to-new-york-city-essay 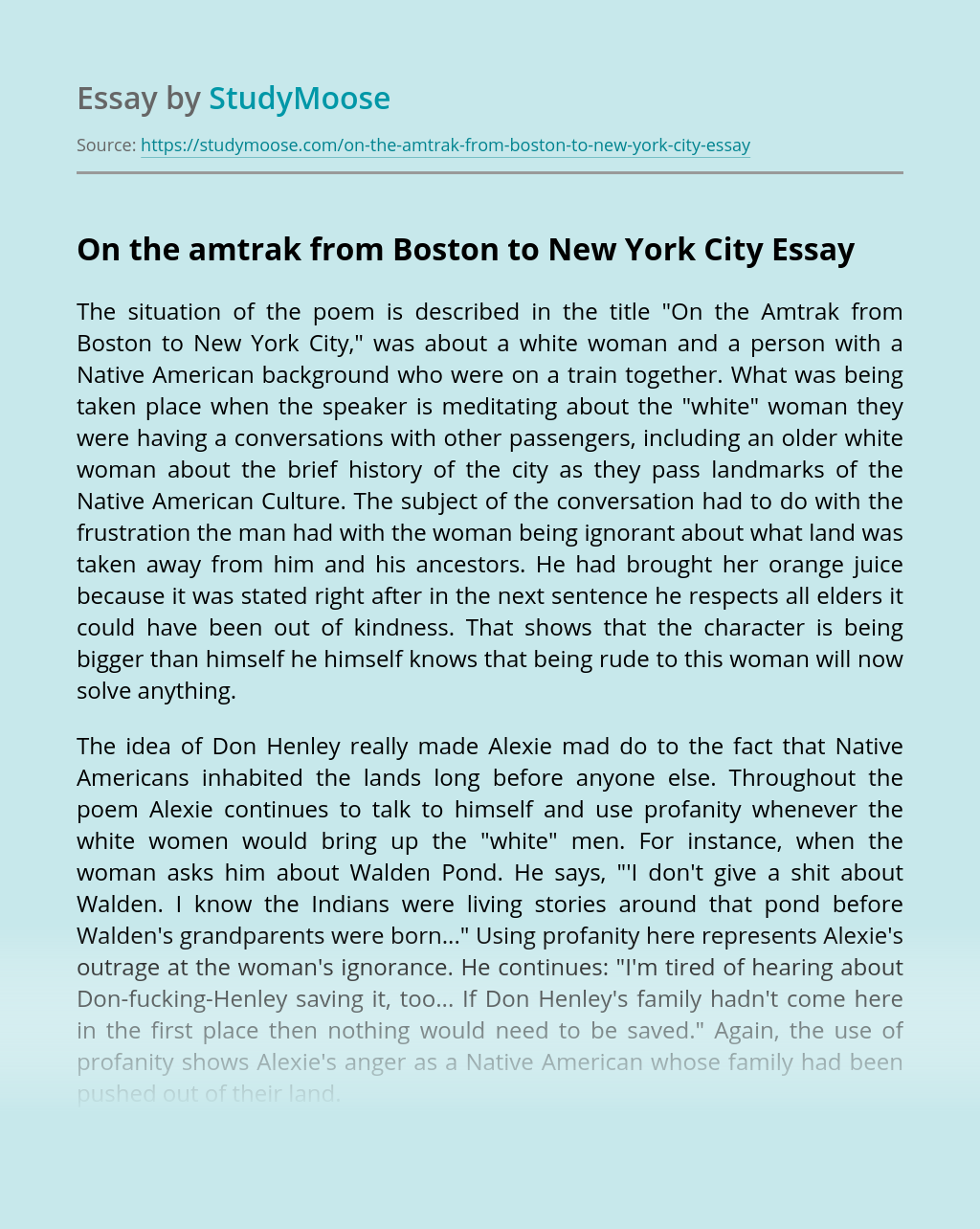