Executive Summary:
As the population of cats in North America increases, so does the ownership of them as pets. Omega Paw’s novel and unique litter box, self-cleaning with a closed top, has tapped into the market with customer satisfaction and positive reviews. The company looks forward to reflect this positivity with an increase in sales and profit levels. Introducing the product in grocery stores would result in weekly sales of $126,000, highest among other alternatives. With direct and indirect competition along with the production constraints, Ebert (president) is motivated to break through these barriers and prolong the growth phase of this product with increased sales and profits.

After a successful first year of business in selling “Self-Cleaning Litter Box”, Omega Paw is forced to strategically plan on how it will grow its business that has the potential to expand and achieve its objectives. With various direct and indirect competitive forces in action, the company has to plan and implement creative marketing and distribution techniques to increase efficiency and productivity, thereby increasing sales.

Objectives, background and environment assessment:
With an increasing cat population in North America, Omega Paw aims to achieve sales of $1.7 million by the end of 1996 fiscal year. The company looks forward to nearly double its sales over the next two years reaching at $3 million by 1997 and $5.7 million by 1998. The company initially started out with shipping the litter boxes directly to the customers. Due to production delays and faults, Omega suffered a dent to its reputation and decided to add a distributor channel to overcome the issue.

As the company introduced their product in the United States, it utilized the skills and industry contacts of manufacturer representatives in order to reach out to the distributors. The company looks forward to meet its target sales level but the current distribution strategy limits the exposure of the product only to the pet stores. To reach the budget sales and profitability, various alternatives have been considered with regards to the distribution of the product at places other than and including pet stores. Before determining which method of marketing or distribution will be the most suitable and profitable one for the company, it is important to underline the strengths, weaknesses, opportunities and threats that the company currently faces and to ascertain which alternative would align most with the company’s interest. The company has maintained high standards of its product quality. This is evident from the fact that the company took a rather risky step in its initial product phase by sending out delay letters to its customers but did not compromise on quality to save the company’s reputation. Additionally, the quality of the product is also warranted from the fact that 7 out of the 8 distributors picked up the product immediately. The easy use of the product and a litter box with its top covered serves to attract customers who are sensitive to odors and scooping feces. Moreover, strength in production capacity and financial resources would allow the company to meet its targets. The company has set up very high sales targets considering the fact that it is has been in the business for only two years. Production delays and inaccurate demand forecasts can potentially impede the operational and distribution functions, thus adding to overhead costs. In terms of the product itself, customers may find a litter-filled litter box heavy and difficult to roll. As the population of cats is estimated to grow at 4% in the coming years, the company has ample opportunities to continue to market its product to new and existing customers. Due to the increase in the ownership of cats as pets, the company also has the opportunity to extend its growth period for the foreseeable future and generate profits. The complimentary product (litter) used with the product poses a significant threat to the acceptability of the company’s product. A sub-standard litter not effectively rolling in the litter box could potentially bring negative reviews to our product. In terms of the business, a booming cat population could attract more companies to introduce enhanced version of this product in this industry where there are no barriers to entry. Market and competitive analysis:

There are estimated to be 66 million cats in North America. This estimate has risen by 7 percent between 1994 and 1996 and is estimated to grown at an annual rate of 4% over next few years. There has been an uptrend in multiple cat households which is primarily due to the ease of care and maintenance
for cats relative to other pets. Omega Paw has segmented its market into three divisions. 5% of the cat owners are new or first time owners while 80% of the owners are experienced. The rest of the 15% are segmented in the “gray zone” where owners keep their pets outdoors and therefore only spend on food. Omega Paw should focus its marketing in the first two segments as those owners are likely to research and browse information about the best available products for their feline friends. The 80% segment could be divided more in to smaller segments with pet owners who prefer to use basic traditional equipment versus owners who are willing to try new products to see if it matches their needs. Omega Paw faces direct competition from three companies. It has a competitive advantage over Everclean Self Scoop Litter Box in term of its pricing. However, Everclean has a bigger advertising campaign and distribution network. While Quick Sand is competitively priced, the whole process of cleaning the litter is strenuous and therefore it would allow Omega Paw to attract the customers of Quick Sand towards its product. The similarity of Lift and Sift product to that of Quick Sand provides Omega Paw with a similar competitive advantage except that Lift and Sift has a very limited advertising exposure as compared to Quick Sand. Overall, Omega Paw is well positioned with a closed box self-cleaning litter product. With proper marketing approach and distribution, it has the opportunity to grab a larger market share and profits. In terms of indirect competition from automated litter boxes, Omega Paw provides an attractive alternative for a significant price difference. The segment that represents 80% of the market would have a lot of consumers using the traditional style litter trays and Omega paw will have to use to a marketing distribution strategy that would reach out to those consumers. Financial Analysis:

Key Questions:
In order to boost sales and reach targets, Omega has to choose a cost-saving method to reach out to its customers. With the current manufacturing capacity and marketing budget, the company should expect to face some competition from direct competitors. However, the company should look to capture market in the early years with the novelty and the design of the product. Omega has a very good opportunity to tap into the grocery store market with break-even units at 886 per week. This factor would also motivate the firm to increase its manufacturing capacity with an early break even capacity. Considering the bumps that the company has faced in its production previously, it will important for the company to maintain inventory standards to eliminate production backlogs and additional overhead costs. There is uncertainty about how competitors would react with the distribution strategy that the company chooses. Alternative Analysis:

The trade magazine distribution strategy would yield similar profits as the grocery stores. It will not add any added variable cost to the production and has reasonable fixed costs. An increase in our manufacturing capacity would allow us to take advantage of this strategy. However, with this alternative the company would break even at a higher production level. The company cannot afford to tap into mass distribution strategy unless it increases it manufacturing capacity to a significant level to cover the fixed costs of $50,000. Apart from the negative cash flow, there will be a significant complexity following this trade route where the company will have to sell directly to the specific mass distribution buyers. The grocery store alternative seems to be the best option that the company currently has based on the profitability and break-even units. The biggest concern with
the grocery store alternative is that it would double the price of the product and there is a great deal of uncertainty regarding consumers willing to spend $36 for a litter box at grocery stores. Recommendations:

In the short-run, the company should avoid grocery stores distribution strategy as there is significant chain of passing of the product down to the consumer. As an alternative, the trade magazine offers a reasonable return with minimal effort on the company’s part. With the target sales level and other associated company objectives, Omega should introduce its product in the grocery stores in the long-run. The product will be more marketable in grocery stores as there will be less availability of competitor products there. Alternatively, a larger market population will have the opportunity to look at the product which may encourage them to buy it while doing other groceries. 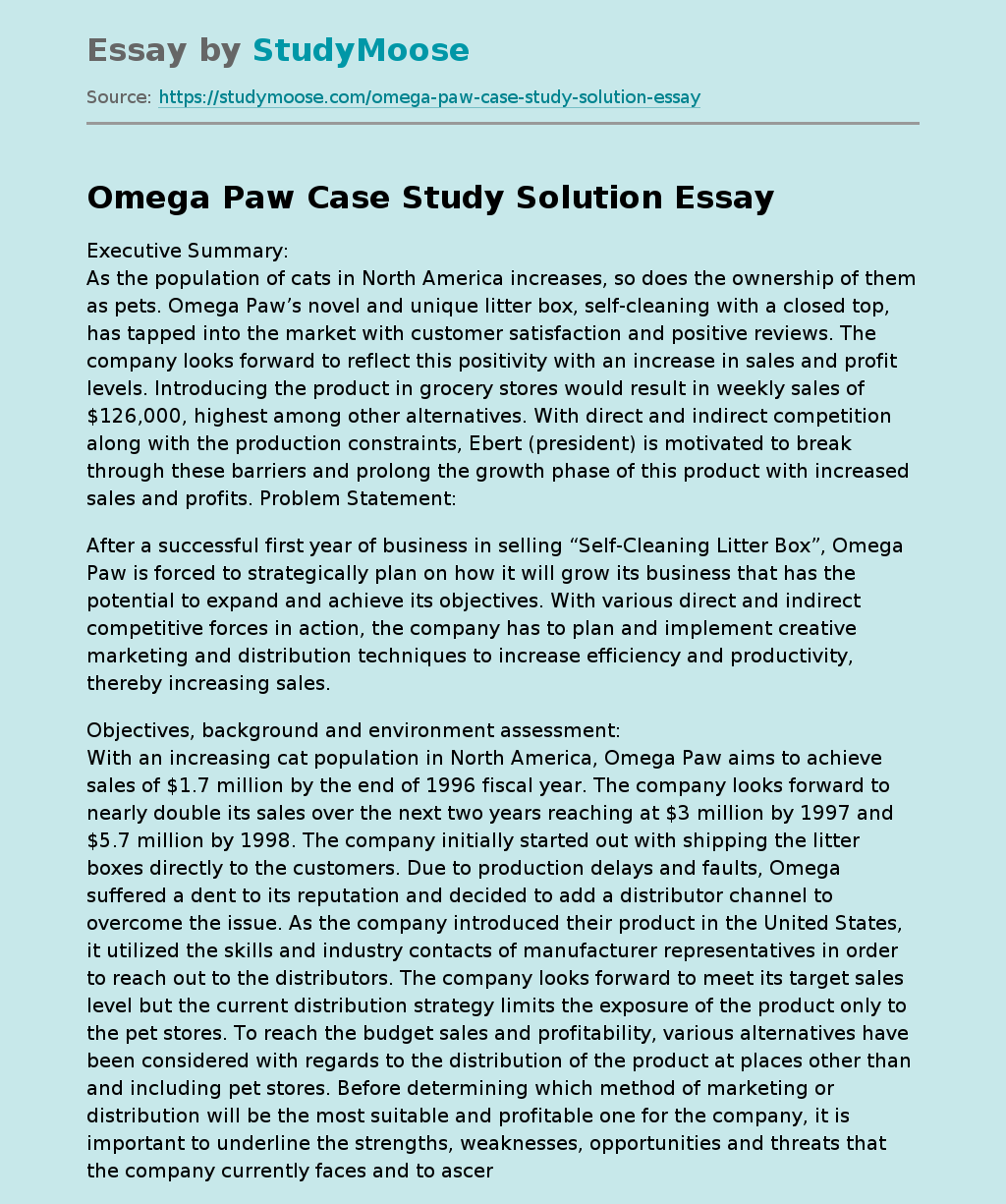