In the film ‘Cool Runnings’ directed by Job Turteltaub had taught me many valuable lessons for future life. Also a character had stood out for me whom is known as Derice, which had taught me even more. He has taught me about commitment, determination and also leadership and this is how it has compacted for myself. To begin with, Derice showed me that commitment could take me to the ultimate limit. Turteltaub used techniques such as close-ups on Derice’s running shoes and his face.

Meanwhile, as Derice is getting ready and focussing on his position, the setting is a beautiful tropical island and an amazing ocean view, which tells me that he must be a local that lives in the beautiful island. Turteltaub also showed when Derice’s passion and commitment had impacted on his image it had stood out quite clearly, even though his gears were tiny rocks and a toilet paper roll in the beginning. Doesn’t mean it could be consistent throughout his life.

One day he could become an Olympic Champion which supports the Olympic Value – pursuit of excellence and fair play. It’s important for teens like myself to learn these valuable lessons because starting a career, dream or passion now could have a huge impact on what it’s going to be like in the future. Lots of us teens are going through rejections and low self-esteem so by following my dreams is what I’m going to be heading for. Secondly, Turteltaub had showed me about determination.

He also used techniques such as close-up of Derice’s face and Irving Blitzer (legendary Bobsled double gold medallist) as Derice was trying to pursue Irv to be the first time Jamaican Bobsled coach. But Irv has been consistently rejecting his offer. Turteltaub has shown how Derice had felt afterwards, after facing his loss in the qualifying round for track racing.

He was determined to find a way to get back into the Olympics. This emphasises that giving up your dream is an easy thing to do, because that is like a short cut for being negative, but by committing and being determined harder, at least you’re going somewhere, which follows the Olympic value – pursuit of excellence. It’s important to learn these valuable lessons because as a teen myself, I’ve been doubted in many different ways throughout my life, but because I’ve been determined to make a change and prove them wrong, that was exactly what I’ve done because I have been true to myself and standing against negativity. Thirdly, Turteltaub taught me about leadership. He showed this when Derice (close-up shot) had to lead by example when his whole boblsled team crashed. 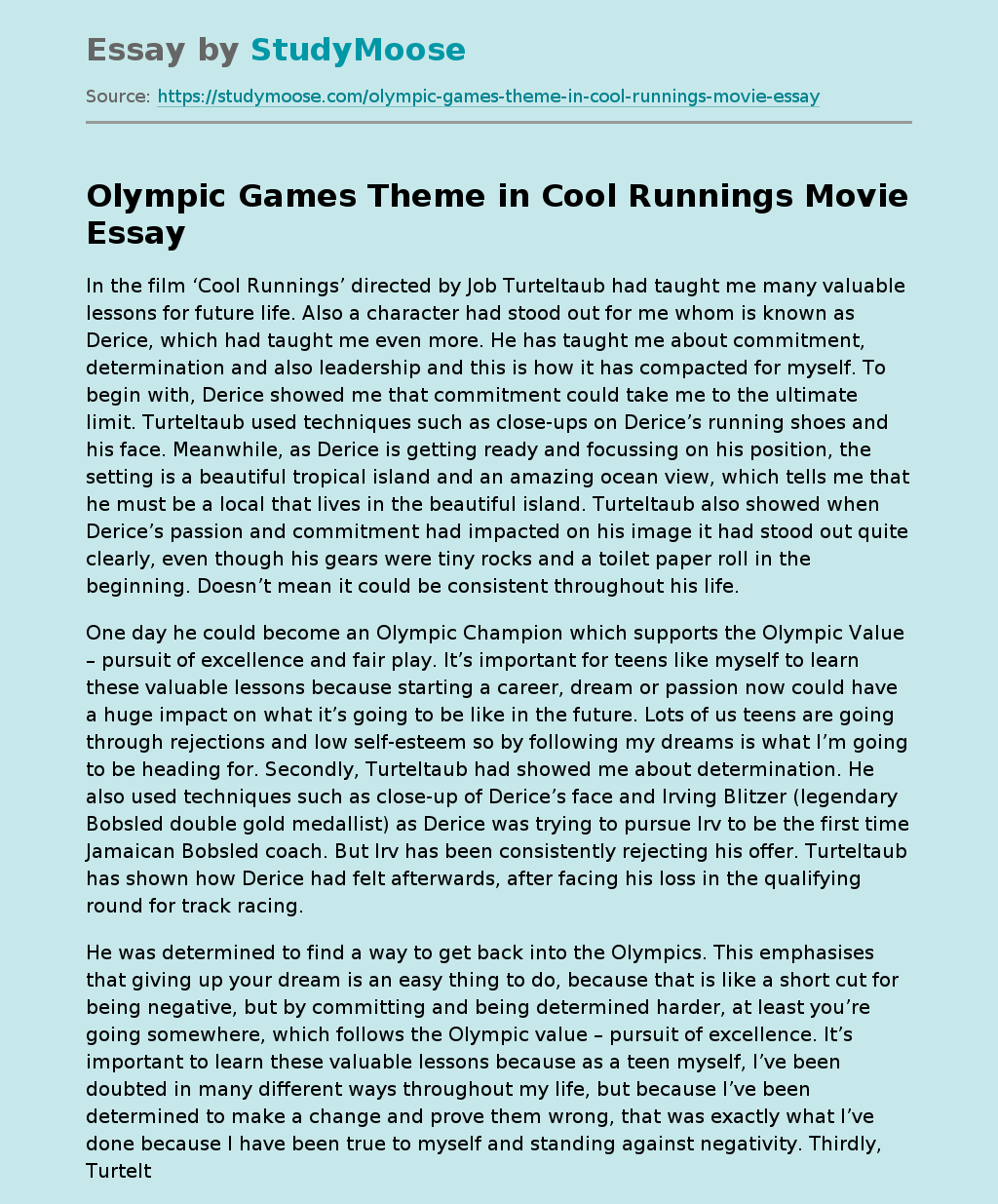