This makes Sikes seem violent and dangerous and it also gives the impression that he is a criminal. Sikes aggressive language was mostly connected to Christianity ‘hell’s fire’ (connotation of hell and sin) hence Dickens was a Christian. Sikes at times would blaspheme God and in the Victorian age, the time the novel was written, language like that was not acceptable, so in order to cover it up Dickens would write a G with a dash alongside it to show that he respected people’s feelings.

The reason why Sikes had an explicit tongue was because of his violent temper or probably the way he had been brought up or simply because that was the way he was. Bill had never experienced love and that’s what made him so emotionless and unsentimental. His use of language and tone often panicked people, especially Fagin, a member of his scoundrel thieves, who was coincidentally a Jew and Sikes was prejudice against Jews.

Sikes used abusive language as a technique of building up tension, this alarmed the Jew and encouraged him to speak in a humble manner. ‘In a humble way. ‘

Sikes doesn’t have any respect for the Jew and neither does the Jew have any for Sikes but if the Jew doesn’t show fear then it will only be putting himself at risk. The Jew knows that Sikes has full control over him. ‘I’ve got the upper hand over you. ‘ Sikes is subersive and Fagin knows that if Sikes ever makes a wrong move Fagin will go down with him, so Sikes uses this excuse as to blackmail Fagin and take advantage of him.

‘If I go, you go, so take care of me. ‘ Nevertheless with Fagin there was a different dimension, he could shop Bill with their mutual interests. The environment Bill lived in shows the aspects of his character, he lived in ‘a dark gloomy den’ and the ‘filthiest part.

‘ Dickens stresses the word den, which sounds illegal and secretive in order to emphasize the obscure criminal underground. Sikes visited other criminals who were part of the underground in squalid, dark and gloomy hideouts where ‘no ray of sunlight ever shone in the summer. ‘ Sikes was directly a stereotypical rogue, he was always in a violent state, even when he was confused ‘violently bemused. ‘ Many suffered Sikes furious frame of mind but quick witted characters like Bates kept things from Sikes to prevent his uproar unlike Bulls-eye, an Albino dog, who was more of a stress reliever then a pet.

Sikes believed that by beating up the dog he would be more powerful. ‘Began to assail the animal most furiously. ‘ No matter how much Sikes would beat up the dog, Bulls-eye never left Sikes. Towards the end Bulls-eye began to look vicious and ready to attack to Sikes, eventually Bulls-eye did leave and this exemplifies supreme irony. Another theory is that the dog is different, he has red eyes and white skin and if he was human he wouldn’t have been accepted just like Sikes, who isn’t accepted by the majority of people. In the chapter Fatal consequences, Sikes kills his lover Nancy brutally.

When Oliver got kidnapped, Nancy began to turn against the plan and felt pitiful for Oliver and regretted helping Sikes, who is coldly logical and Fagin in capturing him. To repent her sin, Nancy tells Oliver’s grand-dad Mr. Brownlow, of his whereabouts not knowing that Fagin had sent one of the scoundrels to overhear the conversation. Fagin tells Sikes what Nancy has brought about and this leads Sikes astray. Nancy’s relationship with Sikes is a dichotomy of contrast, she is like his property, a part of him just like Bulls-eye.

Sikes has a dark and a facet personality, the dark represents the evil Sikes and the white presents Bulls-eye and Nancy, the pure and good side of Sikes. Sikes relationships are based on intimidation, Nancy is also very fearful of Sikes. This is clear from her body language, as she draws her scarf around her when Sikes is nearby. Even though she is scared of leaving him, she admires his power perhaps that’s what she likes about him and because Sikes has never experienced love, he feels that by over-powering her, she will stay with him ‘has no sentiment’ inspite of the fact that Sikes treated her like everyone else but he still showed signs of appreciation, ‘She’s an honour to her sex’.

He practiced threats in a rage to persuade her into immoral deeds. ‘I’ll split your head open against the wall. ‘ This quote doesn’t have an exclamation mark at the end of it, which shows it is genuine and he’s used to saying it. He would regularly say the most offensive things to Nancy which were usually related to her occupation. ‘Do you know who you are, and what you are. ‘ Despite all the appalling verbal abuse she had to with stand, Nancy was not expected to ‘peach’ on Sikes, because the way she betrayed him, was the worst way ever.

Fagin had doubtlessly anticipated upon what became of Nancy. Fagin had shrewdly set Sikes up and asked him what he would’ve done if somebody had ‘peached’ on him in that way. Naturally Sikes response to the situation was violent when Fagin told him what Nancy had done. Fagin’s outlook was, if he could ‘batter’ anyone else, then he should do it to Nancy too, he is trying to show that he cares for Bill by giving him sympathy, but actually he is playing a crafty game. ‘He’s tired-tired with watching for her so long, watching for her. ‘ (expression of devilish anticipation).

Fagin knows what Bill is like as he has experienced such moments. ‘Don’t be too violent. ‘ Sikes injustice lead to Nancy’s death, he ended up beating her down with a club. Nancy’s death is a presentation of Christianity, she represents innocent virgin Mary while Sikes portrays the Devil. It was clear from the way she died that she wanted to repent and change her circumstances as she died holding Rose Maylie’s white handkerchief, a sign of purity.

The poignant ending of Nancy left a scar in Sikes life, the whole experience changed Sikes both mentally and physically, he knew that Brownlow wouldn’t prosecute him but he realised that Nancy and Bulls-eye were the only ones that loved him and without them he would be lost. He was left staring at Nancy’s remaining hair on the club, as if she was still there, and he didn’t dare turn his back on the corpse incase it began to accuse him.

Sikes was in shock and he tried to run away from his guilty conscience but he couldn’t escape the phantom, because it was in his own mind. Dickens emphasises Sikes guilty conscience ‘seemed suspicious’ and his conscience was being persuaded by Nancy’s ghost of memories of her pleading for her life ‘last low cry. ‘ So he decided to leave

London and head for the country side as he was increasingly paranoid. He had physical manifestations as his body began to tremble and sweat, he kept referring to Nancy’s dead body as ‘it’. Sikes physical appearance changed dramatically, he looked like a ghost, his eyes had shrunk to the ground, his voice was hollow and he accepted his downfall. He spent many days looking for a place to sleep and he hadn’t eaten for days, unluckily he overheard talk of the murder he committed, but he seemed ‘apparently unmoved. ‘

Eventually when Sikes went to eat in a pub, he came across a salesman, who was trying to sell a stain remover. Although Sikes had covered up the crime and disposed the weapons and also cut out the blood stains and burnt them, he had forgot about his hat and the salesman took the hat as to show well it worked. Sikes took this to the extreme, he grabbed his hat and stormed off. It is apparent that Sikes is still paranoid, he thinks people know its him who committed the crime and he thinks that by returning to London everything would be back to normal. 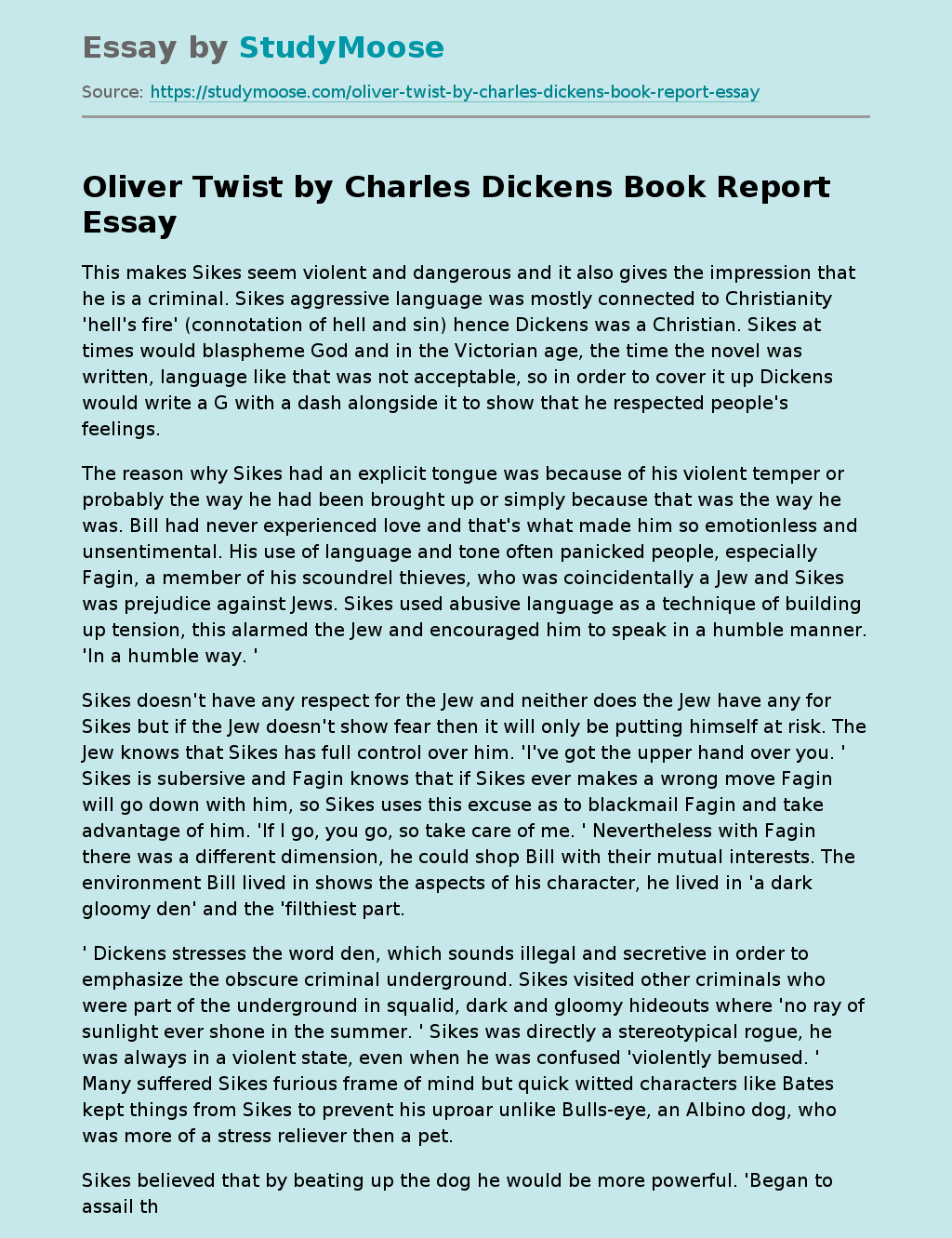