Oliver Twist As a Narrator

Oliver Twist (or the Parish Boy’s Progress,) is an episodic story, published between 1837 and 1839 in the popular publication; ‘Bentley’s Miscellany’. Through popular culture the character of Oliver Twist has become an iconic image of childhood and synonymous with the appalling conditions faced by Victorian children. Oliver Twist is the novel’s protagonist, which is notable in itself, as Oliver Twist is the first novel in the English language to have a child at its centre throughout.

It is interesting that the perception that children should be seen and not heard was challenged by Dickens here by his very placing of a child in the centre of his novel.

Don't use plagiarized sources. Get your custom essay on
“ Oliver Twist As a Narrator ”
Get custom paper
NEW! smart matching with writer

Unlike Dickens’ other novels, however, this protagonist is not the narrator, as in Great Expectations and David Copperfield, instead a third person, adult narrator is used. By filtering Oliver’s vicissitudes through the perspective of an adult third-person narrator, Oliver’s plight is contextualised and Dickens compels the reader to read his tale as one that is emblematic of the fate of similar children in an unjust society.

Oliver “was all alone in a strange place; and we all know how chilled and desolate the best of us will feel in such a situation”. The narrator is championing Oliver’s cause, compelling us to be outraged, acting as a moral signpost for the reader. Indeed, the tone of the narrator’s voice is often aggressively emotive: “I wish some well fed philosopher, whose meat and drink turned to gall within him’ whose blood is ice, whose heart is iron; could have seen Oliver Twist clutching at the dainty viands that the dog had neglected.

I wish he could have witnessed the horrible avidity with which Oliver tore the bits asunder with all the ferocity of famine. ” The word famine would have been particularly resonant to the Victorian reading public who had been besieged in the popular press by lurid tales of the Bengali famine which occurred for twenty five years from 1800, during which time a million people starved. At other points in the novel the narrator adopts a satirical tone to underscore the abuse of children, waspishly describing the behaviour of the authorities as “magnanimous and humane” and mocking the “tender mercies of Churchwardens and overseers.

” Another effect of Dickens adopting a third person omniscient narrator whose adult standard-English voice encloses and contains the direct speech of the children’s idiomatic expressions in the novel is to replicate the control of adults over children in Victorian society. For example : “Toor rul lol loo, gammon and spinnage, the frog he wouldn’t, and high cockolorum,” said the Dodger: with a slight grin on his countenance”. The novel shows how children’s voices are silenced and that society punishes children who speak out and challenge.

It’s significant that it is Oliver’s vocalising, his famous asking for more, that leads to punishment. Dickens’ portrayal of childhood is inextricably linked to his expose of Victorian society’s neglect of children and the callous institutions in place to deal with the problems of poverty. Dickens used his novels as a seditious vehicle for criticising Victorian society’s various social ills. Dickens exposed the hypocrisy of a society which idolised and sentimentalised children whilst simultaneously institutionalising abuse and neglect.

Some of the aspects Dickens challenged were because of his own personal experience, Dickens’ father was incarcerated in a debtors’ prison, despite being of high wealth and social status for part of Dickens’ life. Like Oliver Twist, Dickens was a child suffering unjustly at the hands of Victorian bureaucracy. In Oliver Twist, Dickens criticises the Poor Law Amendment Act of 1834, introduced mainly to remove the two hundred year old tradition of public relief which had previously existed in society, Dickens goes on to suggest that as a result children were turning to crime and women to prostitution to make ends meet.

Instead of damning the otherwise evil characters such as Fagin and Nancy, Dickens humanizes them, causing the reader to empathise thoroughly with them, particularly Nancy, who acts as a mother figure to Oliver. Caricatures of the Victorian under-class, common in the popular press, are challenged by Dickens as he rejects both their demonization and the axiomatic presumption of Victorian society that poverty was self-inflicted, and that it was not the role of society to support children who found themselves in this position. Dickens acts as a kind of literary Dr Barnado, forcing his readers to understand the fat of the “ragged children.

” The necessity for the role of mother in childhood is a recurrent theme in Oliver Twist. Oliver makes frequent reference to his mother, and clearly longs for her, but despite the integrity of his mother being as dubious as that of his father, it is his mother that he fervently defends when Noah Claypole refers to her as ; “”a regular right-down bad ‘un””. Throughout Oliver’s childhood, Oliver is without a maternal figure. In Victorian times, the father would have undoubtedly have been working, and so would have spent little time with his children.

Most of the women who do appear, treat Oliver with very little compassion. The novel begins at Oliver’s birth, and immediately the reader is confronted with Oliver’s tragic circumstances, as well as Dickens’ ironic and satirical narration. Oliver’s mother dies in childbirth, which would have been a fairly common occurrence after births at this time. Immediately, Dickens expresses his objection to workhouses: “… I am not disposed to maintain that the being born in a workhouse, is in itself the most fortunate and enviable circumstance…

” As was usual for such babies orphaned at birth, Oliver was farmed out to Mrs Mann. Mrs Mann was an elderly lady who had been doing this job for many years, and Dickens highlights the possibility for corruption within the provision for children in the parish, as Mrs Mann uses far more of the money apportioned for the children on herself than on feeding the children. He exposes the hypocrisy with which inspections of Oliver’s farm were carried out, as Mrs Mann was always forewarned, enabling her to ensure that “the children were neat and clean to behold”.

Oliver Twist As a Narrator. (2020, Jun 02). Retrieved from https://studymoose.com/oliver-twist-as-a-narrator-essay?post 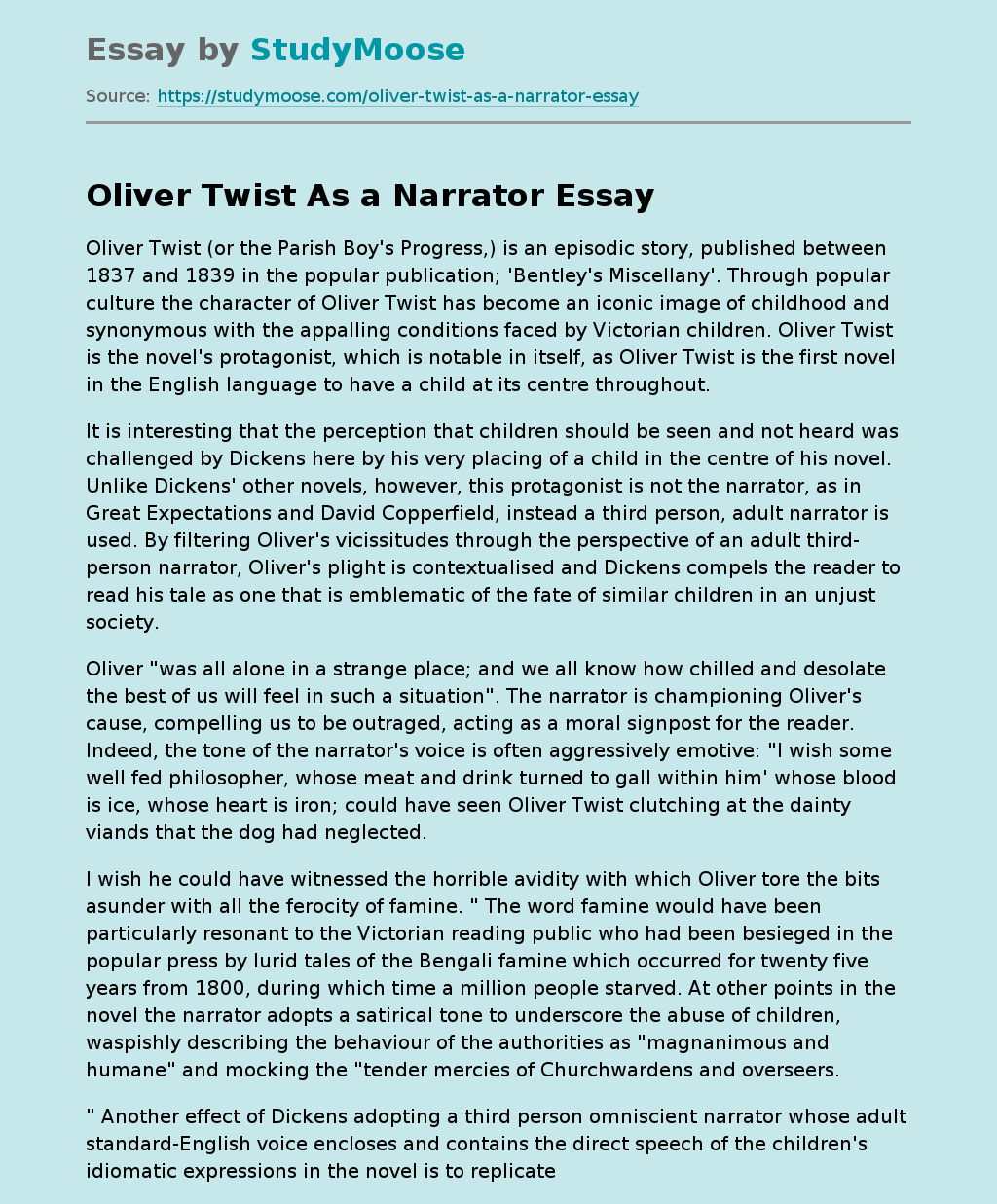