Through Fagin, Oliver is made to work for Bill Sikes. Oliver is shot helping Sikes to burgle the house of a Mrs Maylie, Sikes escapes but Oliver is cared for by Rose and Mrs Maylie. Bill Sikes is another major bully within the novel, Oliver Twist. Nancy who is his mistress is also a victim of Sikes. Bill Sikes character is brutal, aggressive and violent. One major event when we see Sikes as a brutal bully is when he murders Nancy.

Don't use plagiarized sources. Get your custom essay on
“ Oliver finds happiness and security ”
Get custom paper
NEW! smart matching with writer

Dickens shows this hatred by using these words ‘there was a fire in the eyes of both’ this is a metaphor it suggests a burning passion of hatred. Throughout the chapter when Nancy is murdered, Sikes is referred to as ‘the robber’, the housebreaker and the murderer’.

As Sikes arrives at his house ‘Without one pause, or moments’ consideration; without once turning his head to the right or left, or raising his eyes to the sky, or lowering them to the ground, but looking straight before him with savage resolution his teeth so lightly compressed that the strained jaw seemed starting through his skin, the robber held on his headlong course, nor muttered a word, nor relaxed a muscle until he reached his own door.

’ During this section, Dickens uses no full stops, but internal punctuation effectively. Sikes is apprehensive to what may be on the other side. By using this type of text, Dickens builds up speed, tension and anticipation for the reader.

Dickens does this again when describing in detail when ‘he opened it softly ‘lifting a heavy table against it’ double locked the door.

’ This makes the reader want to know what is about to happen. Dickens highlights bullying by using commands ‘Get up, Get up’ this is a command, which suggests aggression and violence. The word ‘murderer’ is used which suggests he has already killed Nancy, but Sikes again,’ seized a heavy club and struck her down’. Sikes striking Nancy with a club seems to be unnecessary as she is already dead. This is the climax of Sikes bullying he has resorted to murdering.

Bill refers to Nancy as a ‘She Devil’. In her dying moments she shows her innocent side by praying, by ‘on her knees and ‘as high towards heaven as her feeble strength.’ The reader gets a sense of goodness against evilness. The reader again sympathises with Nancy as she is murdered while Dickens emphasises Sikes evil ways. Bill Sikes runs away from the scene of the crime which shows that ultimately he is a coward, and his conscience finally dawns on him. After Nancy’s death Dickens uses superlatives to show the reader how cruel Sikes crime is, he uses powerful words like ‘worst’, ‘foulest’ and ‘most cruel’. Bullying is again highlighted throughout this section. Here though, Dickens has highlighted a different type of bullying. It is immediate bullying that is used. Sikes performed a nasty and brutal murder.

Dickens uses a metaphor of the weather to contrast the murder, it is an ironic contrast though, as sun brings new life but it can not bring Nancy back to life. ‘The sun, the bright sun’ shows Bill Sikes truly as a vicious bully. Towards the end of the novel both Bill Sikes and Fagin die, while Oliver finds happiness and security. The book makes the reader aware of Victorian society, the sheer terror of the workhouse and bullying within that society. Charles Dickens uses a range of techniques to present the bullies within the novel. He uses a wide range of language, sarcasm and irony throughout. Charles Dickens emphasises many types of bullying and throughout his novel highlights episodes of violence and bullying which most of Victorian society accepted. 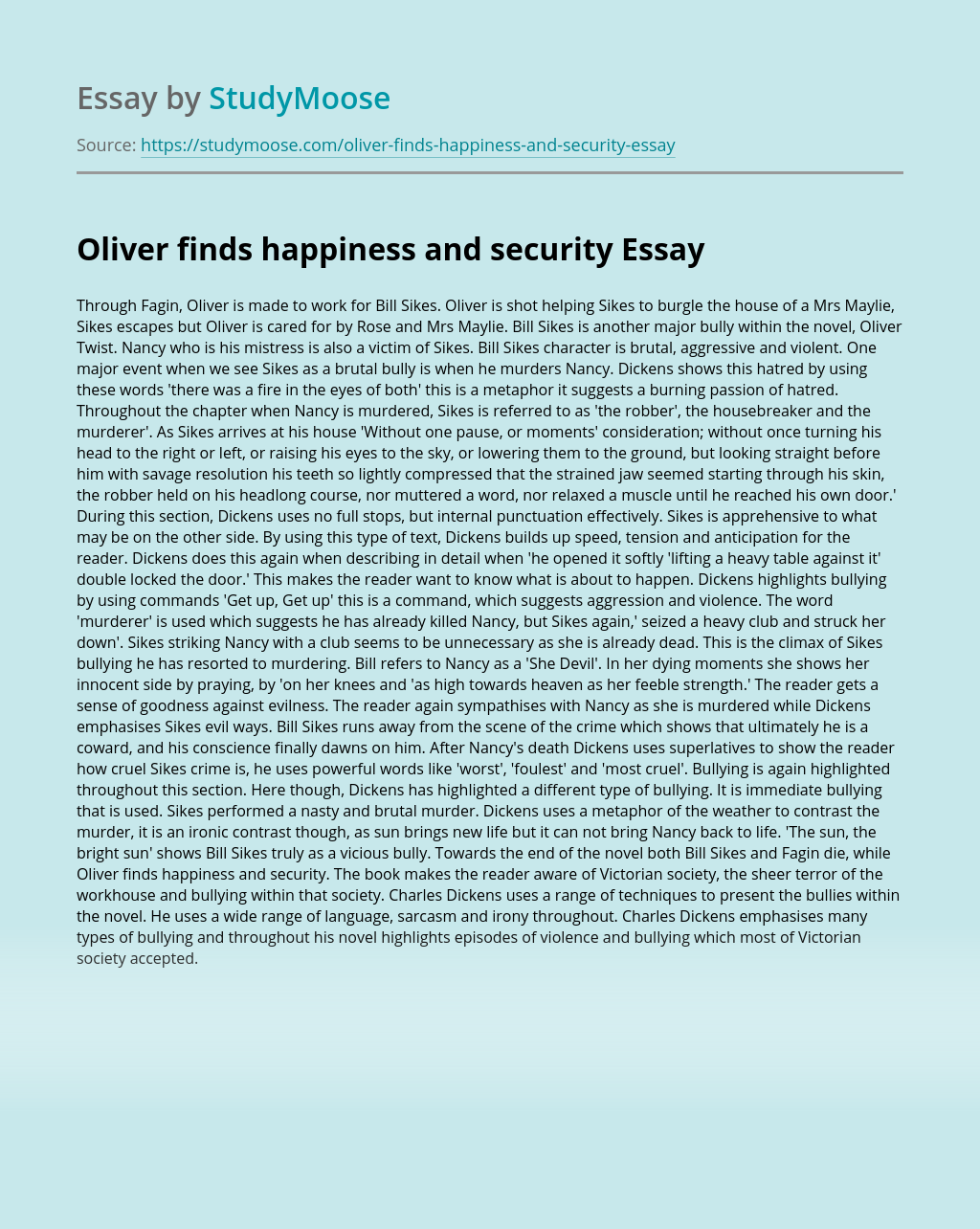