It would helpful to identify who is Oliver Cromwell before affirming whether he is a hero or villain. Citing some popular thoughts about Oliver Cromwell, Peter Gaunt cited, “…Contrary to the popular fancy, it becomes apparent that this Oliver was not a man of falsehood, but truths…An earnest man, I apprehend, may gather from those words of Oliver’s, were there even no other evidence, that the character of Oliver…is much the reverse of that mad jumble of hypocrisies, etc.

Don't use plagiarized sources. Get your custom essay on
“ Oliver Cromwell: Hero or Villain ”
Get custom paper
NEW! smart matching with writer

Based on the available information about his person, his military and political career, and his own integrity, it was quite difficult to established one’s judgment whether Oliver Cromwell was a hero or a villain. However, judging from the two opposing views, it seem imperative to recognized him as hero than a villain despite of the propaganda depicting him as ruthless hypocrite and as military dictator, in view of evidences both recognized by all sides that he has done great things to advance England’s position in the international stage.

With this initial information, it appears that Cromwell is a man of integrity. However, further information reveals that Cromwell was also a man who would exploit every possible resource for his own ambition including people, institution and events “ruthlessly in an underhand manner to further his own breathtaking ambitions, an arch hypocrite” (18). Thus, according to Gaunt, Cromwell can be argued as a power-hungry, megalomaniac, from the outset aiming his office. Gaunt’s description Cromwell’s political career fittingly depicted him as a villain rather than a hero.

According to Gaunt, during the 1640s Cromwell fought against the King and pushed for the trial and execution of Charles I as well as the abolition of the Stuart monarchy to clear his way for the crown and to make himself “king in name” (18). More so, his changing political outlook pose proved to be a disaster for his subjects as according to Gaunt, he used military backing “impose his increasingly extensive and repressive powers and illegally subverting rights and liberties” (19).

From the pages of history covering the period of his participation in the in the affairs of the English monarchy, the long lists of significant events that caused the lives of people who stood on his way, he served to his benefits. Gaunt stated, “There are many curious incidents and events, which in the long or short term proved very much to Cromwell’s benefit, and in which his own role and involvement appear suspicious” (20).

From these infamous thoughts about Cromwell, especially as Roger Howell and R. C. Richardson pointed out, the “nearly 200 years of enduring infamy as a fanatical ambitious hypocrite” no one would dare to say that Cromwell could be hero. However, Howell and Richardson noted that Cromwell’s reputation was “blackened by an active propaganda campaign at the time of the Restoration” but the 1840s he was concluded as the “active and decisive force which he felt England needed” (63).

The ‘Restoration refers to the restoration of the English monarchy during the latter part of 1600s. The restoration court propaganda was aimed at destroying Cromwell’s reputation while associating the restored monarchy, as Joshua Scodel pointed out, “not only with domestic peace after disorder but also with commercial prosperity after economic hardship” (Scodel, 133). But during the 1840s Howell and Richardson cited that Cromwell was placed on the pedestal, transforming his reputation from negative to positive symbol.

During this time, Howell and Richardson stated that although there is still evidence of a negative image of Cromwell, “there was emerging a different Cromwell – honest, strong, assertive and patriotic, a reformer, a leader associated with national vigor, and pride and prosperity” (Howell & Richardson 64). Howell and Richardson emphasized that despite of Cromwell’s infamous reputation there was general agreement on all fronts from the Restoration period onward, that “Cromwell had exerted England’s position in the world far more aggressively than any ruler since Elizabeth” (67).

Most of the resources available on Cromwell’s political and military career present the pros and the cons of this man. Opinions are divided whether Cromwell has done well for the English nation or he was a shame to his country. Cromwell’s policy was criticize as having disastrously altered the balance of power in Europe and was responsible for England’s eighteenth-century struggles.

But in the same way his foreign policy was criticized, it was also seen as feared and respected and remained a “a potent one and provided the opportunity to use Cromwell to beat on the architects of what was seen as weak or wavering policy” (Howell & Richardson 68). His policy was seen as firm, tough, feared and indeed well respected. It cannot be denied that Oliver Cromwell has done great things for his country, despite his image was hunted by the negative reputation associated to some of the cruelest, barbaric, deceptive, and selfish spheres of history of the English monarchy.

His military accomplishment identified him as a successful military commander “active in many different theatres and frequently on the move, and as increasingly influential in guiding hand over army politics …” (Gaunt, 27). This military achievement lifted him from an obscurity and enabling him, as Gaunt puts it, “to play a substantial role in the shaping of the nation” (30). His well documented accomplishment as a military and as a civilian head state that would characterized him as a hero which he well deserved was clouded with doubts in view of the propaganda aimed to destroy his reputation.

It quite clear that evidences of Cromwell’s achievement point to the truth of his heroism. However, his achievements were marred by the impact of the vindictive propaganda of the Restoration apparently in view of his participation in the trial and execution of Charles I. However, with so much malicious issues which according to Gaunt “contain full measure of bias, inventions and confusion” (30), it would be unfair and unjust to regard Cromwell a villain, rather, in view of the many evidences of his achievements both as a military commander and as head of state, it is imperative to recognize him a hero than villain.

Indeed Cromwell’s dedication to both to Puritanism and the Calvinist theology reflect his deep religiosity and fear in god. According to Stefan Collini, Richard Whatmore, and Brian Young Cromwell’s moral earnestness was widely and fondly commended. They points out, “His blameless private life, his habits of prayer and private devotion, his godliness on his death-bed…had long been acknowledged” (127). While these were recognized by his detractors apparently many of the issues against him were merely part of the vindictive propaganda of the Restoration movement.

The impact of such propagandas depicting Cromwell as the ruthless hypocrite, a military dictator, and one who had murdered his sovereign had no doubt influenced generation after generation for the next hundreds years and rejecting any initiative to acknowledge Cromwell’s commemoration as among the great men of England. However, the very fact that there were always people who would asserts Cromwell’s greatness as deserving to be recognized as a national hero despite it was always matched up with protests, depicts the fact that there were indeed such accomplishment that deserved to be recognized.

According to biographer S. R. Gardiner as cited by Collini, Whatmore and Young, “Even those who refuse to waste a thought on his spiritual aims, remember with gratitude his constancy of effort to make England great by land and sea; and it would be well for them also to be reminded of his no less constant effort to make England worthy of greatness” (134). Cromwell’s greatness as a military officer, gaining for him victory after victory in a war to save his country from the control of the enemy, was no doubt deserved to be honored as a hero.

His success both in his military duties and as head of state had long been denied recognition and he was constantly subject of destructive propaganda not because he was an oppressive or tyrant leader but because of his dedication to his religion. Cromwell’s war campaign to Ireland and Scotland could be seen as a war between Catholic and Protestantism, where it has been a common case in much of Europe during this period.

Indeed, his actions were simply based on what is demanded by the situation in which, had the Catholics were in the upper hand, they would do exactly just what Cromwell has done. Citing some letter of support to Cromwell, Laura Knoppers and Joan Landes stated, Sidrach Simpson wrote Cromwell in the language of Revelation that “The Lord is…powring out his vial on the sun; that is, on kings…you are throwing down what god is throwing down” and from certain William Hickman which assured Cromwell that “God hath designed your Excellency to drive out anti-Christ out of all his forms” (96)

From all of these, Cromwell was a much maligned leader of great accomplishment and he deserved to be recognized as a national hero for bringing honor, greatness, prosperity, and for his tremendous victories as military commander in defense of his country. He could not be villain and any thoughts of him as villain was merely based on the propaganda against him by his critics based on selfish and vindictive motives. References 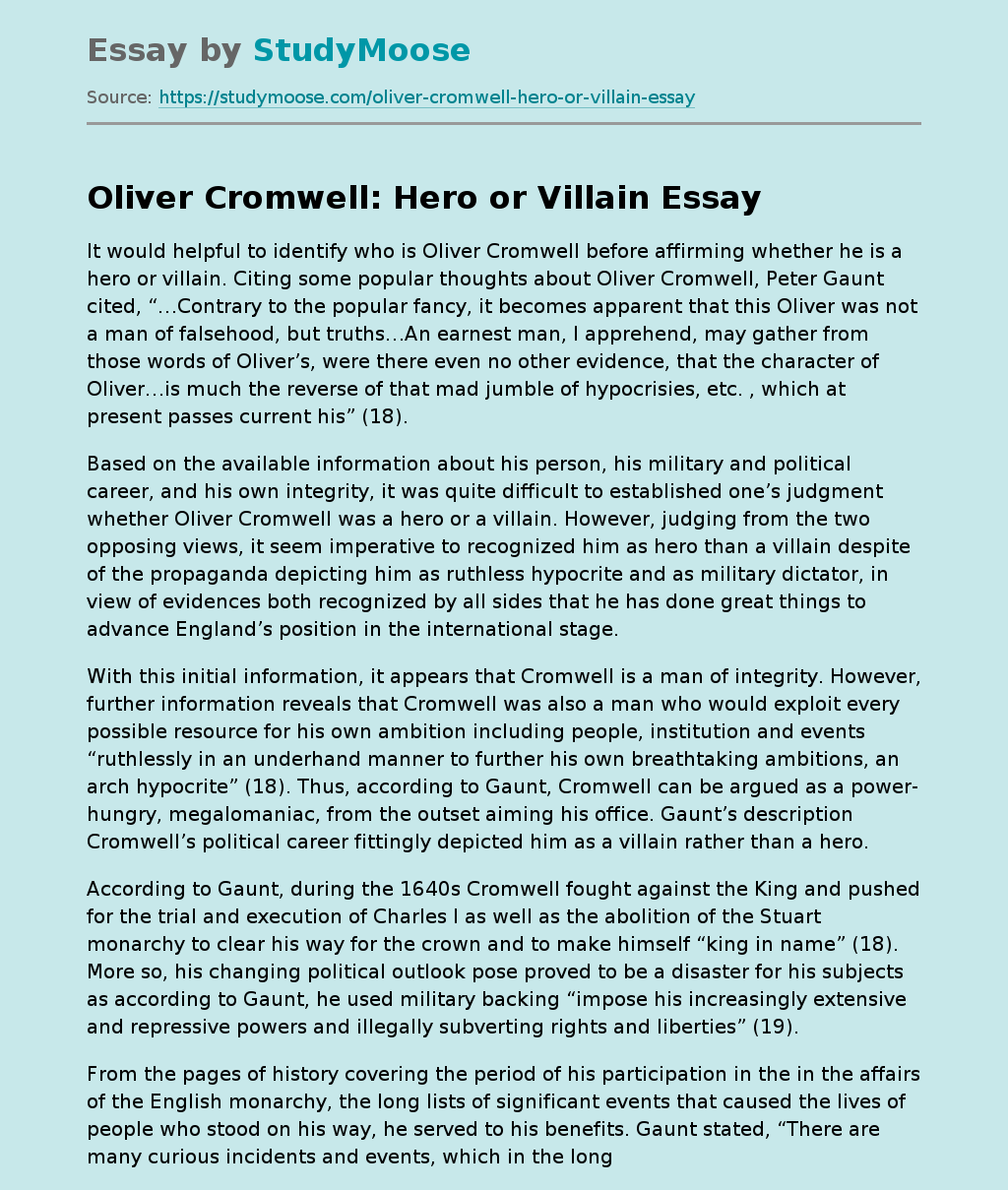