However, Oliver’s representation of the court could be further emphasised were his conversation with Charles (which reveals the full extent of his evil and treacherous nature) not cut and edited. Even so, Oliver positions himself so that he is standing above Charles, possibly as an attempt to convey his superiority and power, as the court also does over the forest. It can also be said that the contrast between the court and the forest can be represented by the brothers Duke Frederick and Duke Senior-Duke Frederick, in many ways, represents the court, whilst Senior represents the forest.

Don't use plagiarized sources. Get your custom essay on
“ Oliver and Orlando Comparison ”
Get custom paper
NEW! smart matching with writer

Firstly, the inhabitants of the forest live as a community and aid one another, as Duke Senior is aided by his loyal Lords who went into voluntary exile with him- “Loving Lords have put themselves into voluntary exile with him”. Also, Duke Senior attracts others of a naturally benevolent nature (“Many young gentlemen flock to him”), as the forest attracts inhabitants who are natural and good like itself.

In contrast, Frederick only allows others to take certain actions if they in some way benefit himself- he only allows his brother’s followers leave in order to gain their estates and revenue- “Lands and revenues enrich the new Duke; therefore he gives them good leave to wander”. Also, it can be seen that the ongoing quarrel between the two pairs of brothers is representative of the ongoing conflict between the natural goodness of the forest and the unnatural cruelness of the court.

It must also be noted that film as a genre allows the director and camera to choose whom the audience views, by means of zooming in or focusing on a particular person. This gives a huge scope for further highlighting the parallels between Oliver and the court, an example of which occurs during Oliver’s soliloquy, during which the camera focuses solely on Oliver. Oliver’s subsequent reluctance to gaze directly at the camera during this hints at his shifty and unnatural nature, as the court is also unnatural and untrustworthy.

In complete contrast, Orlando can be seen to represent the natural forest in his simple unadorned clothing, which reflects the simplicity and natural state of the forest, which has been little altered by humans. Orlando’s somewhat effeminate appearance also reflects the kind and caring attributes of the forest, which are often associated with female characteristics. Also, Orlando places his hand on Oliver’s throat, which is true to the text and shows that Orlando represents the forest (assuming that he only takes this action to restrain Oliver during a violent outburst).

This action can also be seen as Orlando displaying his natural and understandably angry emotions. It is my belief that Orlando and Oliver also represent the contrast between the court and the forest in the 1997 edition of ‘As you like it’, which was directed by Christine Edzard. Firstly, Orlando has a wild unkempt appearance, thus reflecting the fact that he was brought up “rustically”and reflecting the rustic state of the forest as described in the text.

However, Edzard portrays the forest as a barren, desolate urban wasteland, which could be seen to reflect Orlando’s emotions and inner turmoil but in no way follows the conventions of the pastoral tradition, apparent throughout much of the text. Moreover, Orlando adopts a casual, relaxed stance when he leans languidly on a pillar, personifying the natural, relaxed state of the forest. In contrast, as in the BBC adaptation, Oliver initially attempts to strike Orlando, showing his cruel nature and subsequently reflecting that of the court.

Also, Oliver is smart, upright and bespeckled, thus creating a formal and serious appearance, which is reflected in the nature of the court. However, Oliver does sit in a more relaxed pose with Charles, showing that he is uncomfortable around Orlando as the court is uncomfortable with the forest. Furthermore, Oliver also has smooth, slicked back hair, which, in my opinion reflects the falseness of the court, which could be seen to be portrayed well in this interpretation as it is set in the foyer of a modern corporate building, thus portraying it’s (and Oliver’s) prosperity in comparison to the forest.

However, this is not entirely true to the text and difficult to deal with, as the first scene between Orlando and Oliver is described as being set in the orchard of their home in the stage directions of the text – “An orchard near Oliver’s home”. However, in this particular interpretation of the text doubling is used for the characters of Oliver and Orlando, which I believe poses problems at certain points of the play, such as in act one, scene one when the camera alternates between the two brothers during the scene when they should supposedly stage a physical fight.

Orlando cannot “Take this hand from thy throat”, as suggested by the text, if it is not seen to be there in the first place. Admittedly, it is possible to portray this scene in the genre of film to some degree of accuracy (although Edzard does not do this) but it would be impossible to re create to full effect in a play. Another interpretation of the play in which I believe the contrast between the court and the forest, as described in the text, can be seen to be represented by Oliver and Orlando is the 2003 Royal Shakespeare Company play. 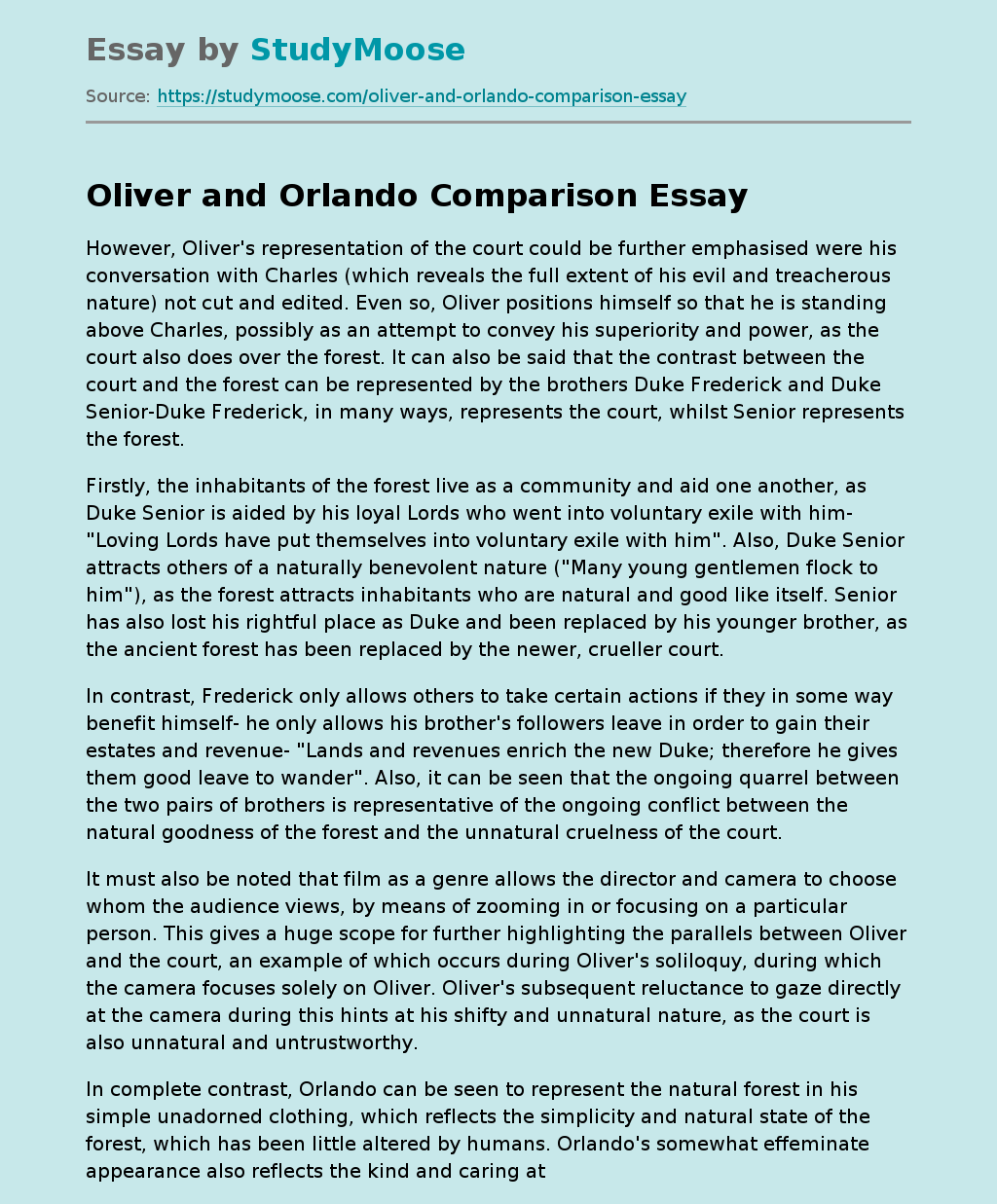