Don't use plagiarized sources. Get your custom essay on
“ Old Faithful ”
Get custom paper
NEW! smart matching with writer

The steam rotates a turbine, which is made of several rows of blades mounted on a large shaft.

The steam’s pressure flows through the turbine, pushes against the blades, and causes the shaft to turn, much like you can make a pinwheel spin by blowing on it. The turbine is attached to a generator that makes electricity. Like electricity from PV systems, solar thermal power can be intermittent. To avoid this problem, many systems use a backup system that relies on natural gas to heat the water.

Because solar thermal systems concentrate the sun’s energy, they need to be located in areas of the world that receive a lot of intense sunshine. Wind power Did you know that wind is considered an indirect form of solar energy?

This is because the wind is driven mainly by temperature differences on the surface of the earth that is caused by sunshine. For centuries, the wind has been used to sail ships, grind grain, and pump water. Now, people use the wind to generate electricity.

The windmills built long ago had many blades, but today’s wind turbines usually have just two or three blades that turn when the wind blows. But the blades on wind turbines are much longer than those you might see on a windmill. In fact, wind turbine blades can be up to 82 feet (25 meters) long! The blades drive a generator that produces electricity, much like steam turbines.

The longer the blades and the faster the wind speed, the more electricity the turbine generates. Wind turbines are placed on towers because the wind blows harder and more steadily above the ground. To produce the most electricity, wind turbines need to be located in areas where the wind blows at a constant speed, which it does not do in all parts of the world. Wind speed is described by seven “classes. ” For example, Class 7 winds are extremely strong, while Class 2 winds are mild breezes. Generally, Class 4 winds and above are considered adequate for a wind turbine to produce electricity.

Large groups of wind turbines, called wind farms or wind plants, are connected to electric utility power lines and provide electricity to many people. New turbine designs now take advantage of less windy areas by using better blades, more electronic controls, and other improvements. Some new turbines can also operate efficiently over a wide range of wind speeds. An advantage of wind turbines over some forms of renewable energy is that they can produce electricity whenever the wind blows (at night and also during the day). In theory, wind systems can produce electricity 24 hours every day, unlike PV systems that can’t make power at night.

However, even in the windiest places, the wind does not blow all the time. So, while wind farms don’t need batteries for backup storage of electricity, small wind systems do need backup batteries. And, we’re still learning about local wind patterns and how they affect wind turbines and blades. Geothermal energy We can also get energy directly from the heat in the earth. This is known as geothermal energy, from “geo” for earth and “thermal” for heat. Geothermal energy starts with hot, molten rock (called magma) miles below the earth’s surface that heats a section of the earth’s crust.

The heat rising from the magma warms underground pools of water known as geothermal reservoirs. Sometimes the water can even boil to produce steam. If there is an opening through the rock to the surface, the hot underground water may seep out to form hot springs, or it may boil to form geysers. One such geyser that you may have seen is Old Faithful in Yellowstone National Park. For thousands of years, people have been using hot springs for bathing and for cooking food. With today’s technology, we do not have to wait for the hot water to come to the earth’s surface.

Instead, we can drill wells deep below the surface of the earth to tap into geothermal reservoirs. This is called direct use of geothermal energy, and it provides a steady stream of hot water that is pumped to the earth’s surface so its heat can be used. Geothermal energy also is used to produce electricity. Similar to solar thermal electricity, steam-either pulled directly from the geothermal reservoir or from water heated to make steam-is piped to the power plant. There, it rotates a turbine that generates electricity. One source of geothermal power is The Geysers geothermal field located in northern California.

This power plant is the largest source of geothermal energy in the world and produces as much power as two large coal or nuclear power plants. While geothermal energy is a good source of power, we could run out of it by drawing so much energy out of the reservoir that it is not able to replenish itself at the rate we’re using it. In addition, water from geothermal reservoirs often contains minerals that are corrosive and polluting. Biomass energy When you burn a log in your fireplace or in a campfire, you are using biomass energy. Because plants and trees depend on sunlight to grow, biomass energy is a form of stored solar energy. 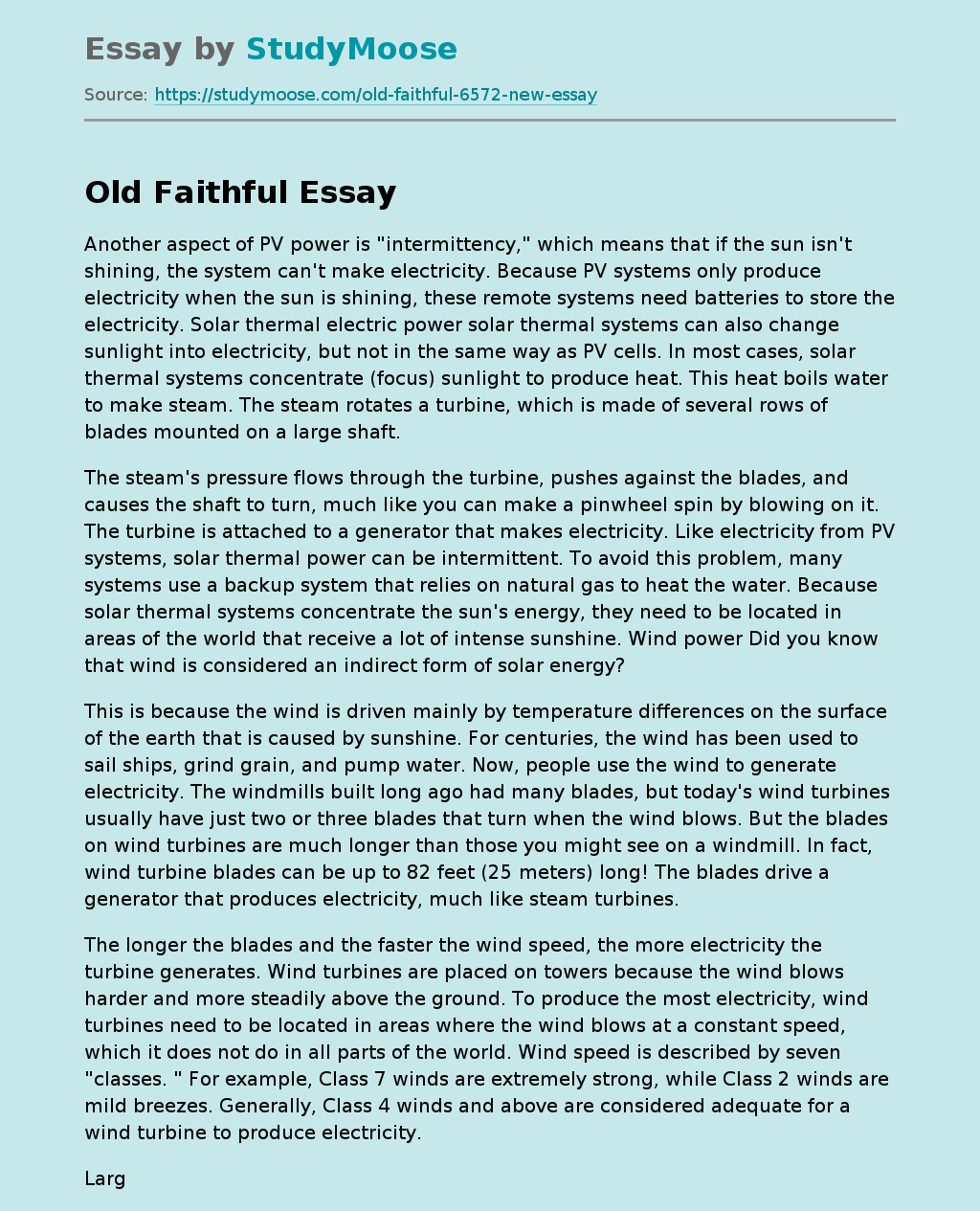