The Interesting Narrative of the Life of Olaudah Equiano was published in 1789 and was the most popular book of its era (Allison, 1). The book was written by Equiano, or Gustavus Vassa, himself about his life in freedom as a child in Africa, slavery, and freedom during the British campaign against the slave trade (Allison, 1). He recorded every part of the slave experience, from his capture in Africa at the age of 11, on. Olaudah was captured along with his sister and they were separated immediately.

Don't use plagiarized sources. Get your custom essay on
“ Olaudah Equiano’s Book ”
Get custom paper
NEW! smart matching with writer

Slaves were often separated from their families because it breaks their spirit and gave them no one to fight for so they had no reason to fight. Most of his book tells of his life as a free colored man in Europe, the Caribbean’s and America (Allison, 1).

During the 18th century, slavery was legal, and this meant no one wanted to give it up because they felt slavery was more profitable than paying workers. Because of this, Olaudah was sold to British slave traders who kept him enslaved for 10 years.

They changed his name to Gustavus Vassa to dehumanize him and strip him of his identity.

His book included multiple arguments against slavery and most of his arguments were economic. Olaudah was mainly interested in the effect that slavery had upon the capitalist system (Harris). The same system he used in order to gain his own freedom (Harris). He argued that treating the slaves brutally is against the best interest of their owners. He says “Instead, he contends that ‘benevolence is their true interest.’ (Equiano, 95). He believes that if slaves were treated fairly, they would be less likely to run away, and they would work harder. This would also be better for the slave owner because they would hold greater sales by not having to replace the slaves. By using this argument, he was able to use himself as an example. Equiano was a hard worker who often got treated better than the other passengers because he was ill and a hard worker. This gave him multiple opportunities to run away, but instead, he stayed and worked to save enough money to purchase his own freedom. Olaudah put his trust in the capitalist system and believed that wage labor would strengthen the business world (Harris).

Another economic argument he used against slavery is one where he recognizes resources and commerce within Africa besides the slave trade (Harris). Equiano was a well-educated man, so he was able to make Africa out to be a large manufacturing place for Britain. He directed the interests of the slave trade operator, away from slaves and towards the commerce that would be beneficial for Africa (Harris). He believes that if blacks were able to stay in Africa, the population would increase, and so would the demand for goods. The theory of supply and demand could be more profitable than the slave trade ever was.

Equiano’s book was to prove that blacks can be just as intelligent as whites and could equal to whites. He hoped to know and explain the sociological aspects of race relations, in which ‘man is hindered by his situation.’ When it comes to slaves, they are faced with ignorance because they are owned by someone else. They are not able to grow as individuals, so they are not able to be contributors to their society. This is anti-capitalist and anti-humanist and the inequality within the community leads to the breakdown of all morals.

Equiano is able to narrate that slavery exposes the brutality within human nature. It instills that slavery treats men as property and not humans. He feels that men need to be incorporated in to society and to be accepted, not isolated from the rest of society. Because Equiano was a slave himself, he experienced being treated this way firsthand which is what made his argument. Equiano once was beaten for refusing to eat, and saw a man be beaten and thrown overboard. When there was left over fish on the ship, traders would throw it overboard instead of feeding it to the slaves. Those who attempted to eat the left-over fish were beaten. Equiano experienced the horrors and the suffering of the slave trade. After going from slave to free man and telling his story, Equiano wanted to be treated and identified as “man”.

Equiano is reaching out to the British government to hear his plea and his plea is freedom for those who are enslaved. He dedicated his book “to the Lords Spiritual and Temporal, and the Commons of the Parliament of Great Britain” (Equiano, 33). Due to this dedication, his intentions were made in hope that the Queen and British legislature would play a part in the abolition of slavery. It was a long shot to hope that Britain would jump on the abolitionist band wagon because slavery was profitable to them. Because of this, Equiano had to utilize British language and methods of writing, and Christianity to gain attention from the British.

Olaudah Equiano was held as a slave for 10 years and worked until he could afford to pay for his freedom from his slave trader. He used his personal experience as an enslaved man to make arguments against slavery. As a man who experience all of this firsthand, he made extremely convincing arguments about the evils of slavery and how it degrades the lives of humans. 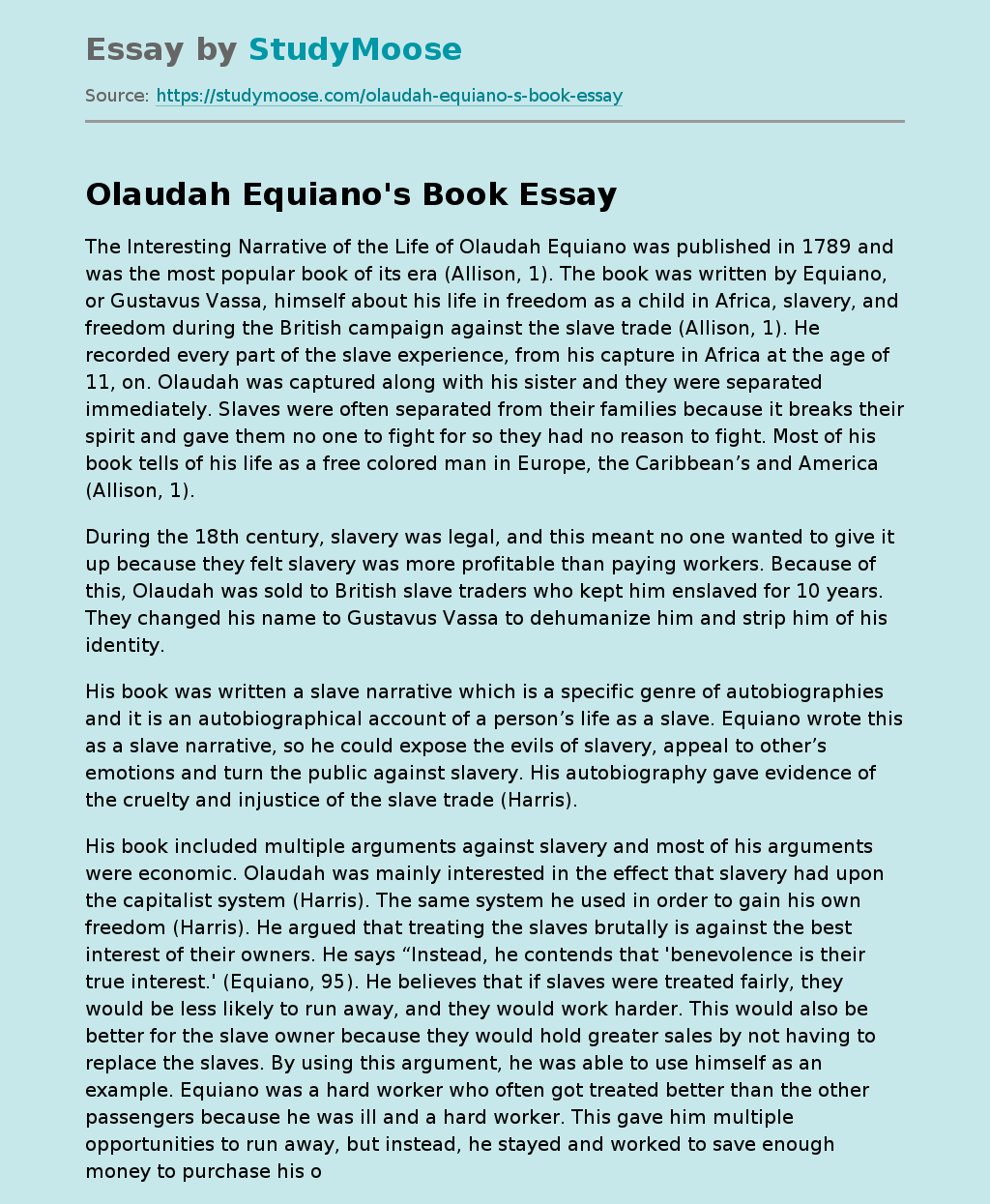