1. If Norm chooses to go ahead with the microprocessor conversion on the machinery without passing it by the team, what are the potential conflicts that might arise? What are the advantages of such a move?

– The biggest potential problem here is that the production team might feel slighted as their opinions were not considered in this major decision, and it may affect their current strong feeling of value hat they have with the company. Essentially if feeling of value is affected then productivity will be affected, as Steve Cooper a contributor to Forbes points out studies show that companies that effectively appreciate employee value enjoy a return on equity & assets more than triple that experienced by firms that don’t.

Turn in your highest-quality paper
Get a qualified writer to help you with
“ Oilwell Cable Company Case Study ”
Get high-quality paper
NEW! AI matching with writer

(Cooper, 2012) The advantage of such a move would be fulfilling the employees wishes of upper management making the tougher decisions not the team; also it would not only eliminate the three day deliberations that usually precede the team’s decision but it would also meet the employees desire of less time spent in team meetings.

2. If Norm decides to put the decision to the appropriate production team, what are the potential problems? What would be the advantages?

– Here the potential problems is the deliberation period normally associated with team decisions, as this means a loss in productivity as these deliberations happen on company time. It could also affect morale, as employees already have a desire for less team meetings adding more to reach a decision will result in loss of confidence in upper management.

Additionally, this decision based on the org chart, will then have to be approved by upper management which results in additional lost time as these decisions are already a struggle for them. On the flip side advantages here is that it would keep high value alive, as the employees would see that their opinions are truly valued when decisions affect the entire business; also it would be a great opportunity for upper management to gather thoughts and feedback from their employees who live the day to day process of the job. Finally when employees can connect value to their job productivity and implementation go smoothly because they each “own” it.

3. If the production team chooses to approve and implement this microprocessor conversion project, what form of project organization will this represent?

– Functional organization, as the production team is the functional division of the company as our text points out that has the most interest in ensuring this project’s success or can be most helpful in implementing it. (Meredith & Mantel, 2012 pg.177)

4. Given the size of this organization and the number of projects they deal with, would it make sense to institute a Project Management Office? Is there another arrangement that might be a good alternative?

– I think a PMO makes sense, as our text makes clear, a project management office (PMO) can provide critically important services for all projects. The skill with which the PMO organizes, administers, and carries out its responsibilities will have a major impact on the ability of projects to meet their objectives. (Meredith & Mantel, 2012 pg.177) This is vital as the company will be able to keep track of project progress and decisions can be made quicker, possibly eliminating the current double deliberation periods. Alternatively as projects arise if project teams of the necessary parties could be quickly formed and headed by an assigned company PM or the best suited yet most qualified individual from upper management for the job; this may also work to the company’s advantage.

5. How much impact might microprocessors have on production costs? Assume that variable overhead represents the same percentage of costs as fixed overhead. Find the net present value if the microprocessors cost $25,000 and their installation runs another $5,000. Assume a 10% margin. – Here the impact of the microprocessors on production will not be high as the variable and fixed overhead costs are the same percentages, meaning that both fixed costs that are unchanged based on production and those costs that vary by output are equal percentages. Additionally net present value impact in a year would be $30,300 based on the total initial start up cost; here to see a true balance it would be best for Norm to also investigate the financial benefits (cut time, less scrap, and overall profit).

6. Compare Norm’s recollection of the division’s productivity gains between 1995 and 1999 to Exhibit 2. Explain the inconsistency.

– Here human recollection versus actually data results makes it clear why data should be collected and reported on versus relying on memory. The consistency could be due to the fact that in 2000 the company was hit hard by the recession and productivity took a serious negative hit, therefore as productivity rose and eventually surpassed its pre-recession numbers Norm simply was reminded of the “good old days” of high productivity.

7. What would you recommend that Norm do?
– I would recommend that a PMO be implemented for the task of; Establish and enforce good project management processes such as procedures for bidding, risk analysis, project selection, progress reports, executing contracts, and selecting software. Also, collect and disseminate information, techniques, and lessons learned as reported in project evaluations that can improve project management practices. (Meredith & Mantel, 2012 pg.194-195) If that’s not currently feasible, I would suggest that Norm first runs the decision by upper management as there are many benefits with the planned implementation of microprocessors; once agreed upon this decision should be conveyed to the employees, then the production team should be allowed to voice their opinions and suggestions on the decision. This approach will avoid any animosity the team may feel towards upper management, while avoiding the unnecessary deliberation process that results in lost time. 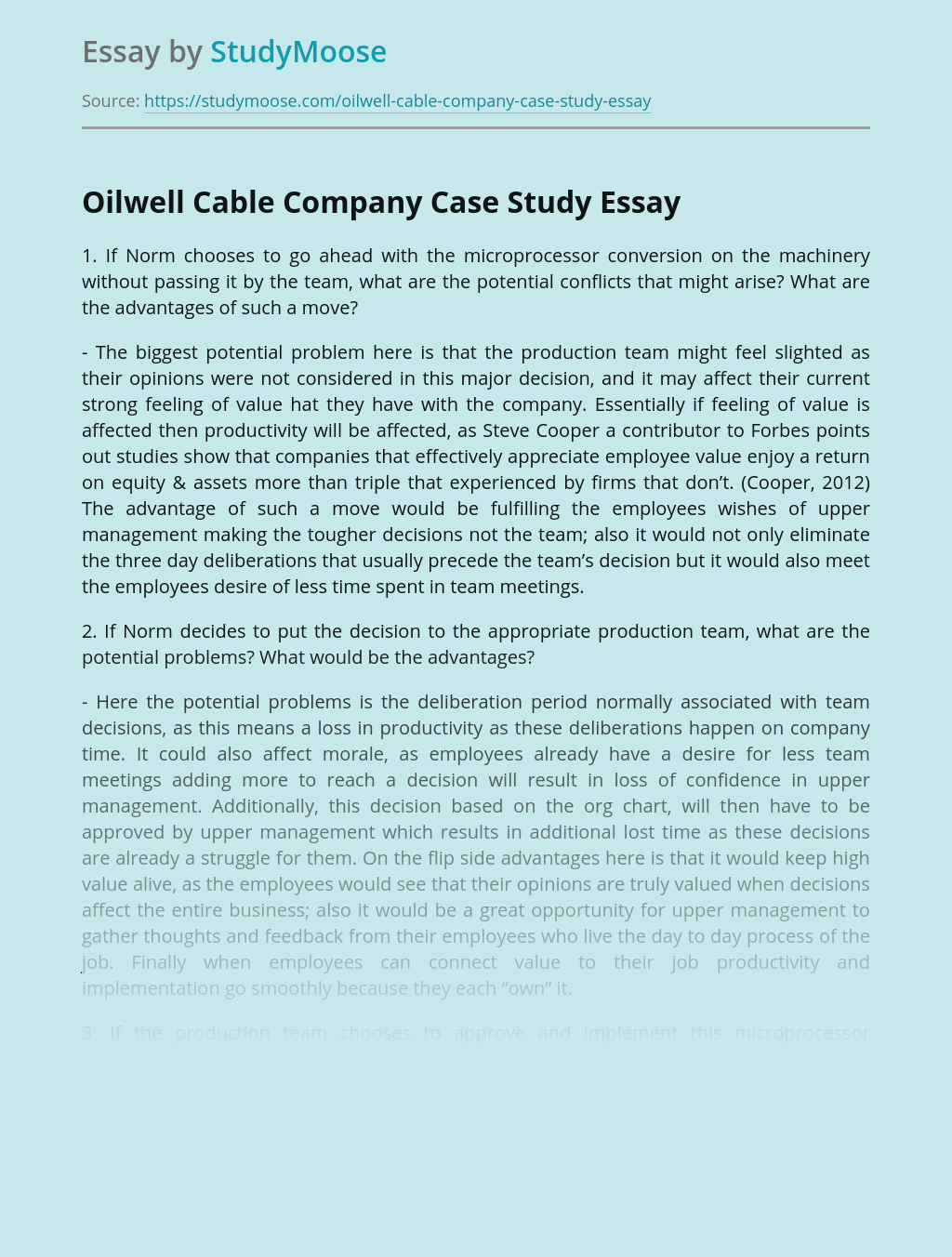 Turn in your highest-quality paper
Get a qualified writer to help you with
“ Oilwell Cable Company Case Study ”
Get high-quality paper
Helping students since 2015
Stay Safe, Stay Original