The author of the article, “Offensive Play” is Malcolm Gladwell. He is a staff writer for The New Yorker magazine, and has published four books. “Offensive Play” was published in the October 19th, 2009 edition. The New Yorker began February 21, 1925, and is now published forty-seven times annually. It focuses on arts, culture, politics, sports, medicine, etc. Anything enticing the wealthy, middle-class and metropolitan is what it is geared towards. In addition, it has also won many awards. I believe that The New Yorker is up to date because the year 2009 was not too long ago for a great deal of information to supersede what we now know.

Turn in your highest-quality paper
Get a qualified writer to help you with
“ “Offensive Play” by Malcolm Gladwell ”
Get high-quality paper
NEW! AI matching with writers

Mr. Gladwell did not have a “pre-set” perspective on things because he gives you clear facts about the article “Offensive Play” and the dangers of football, so we can read it with an open mind and figure out what to do. The intended audience for “Offensive Play” was for doctors’ for research, fans and athletes.

This article seemed to have a good balance aimed towards the population in general because it gives you background information on researchers, the injuries involved, the sport, and what it is we can do.

Obviously, Mr. Gladwell had a clear motive to write this article. He wanted to let the public know the dangers of the National Football League, and what illnesses develop in former players’ so perhaps, we can think of ways to make it safer. “Offensive Play” was written to inform you of the dangers of the N.

F.L. Mr. Gladwell gives us both sides of the topic; how it’s dangerous to play, but there are things that can be done to improve the health and overall wellbeing of the players’. I didn’t feel an emotional punch from reading this article; although, it did make me more aware of the effects of playing the sport.

In the article, “Offensive Play” by Malcolm Gladwell, the author argues that, researchers’ are studying the brains’ of former football players’ to examine the long term effects of hits / concussions received during the game. Players’ dedicate their skills and motivation to the game, but face serious illnesses that can lead to death. Studies done on former athletes have found mental illnesses in the brain from the trauma of getting hit during a game.

It is unclear whether changing the rules of football will decrease brain injuries because many little hits can impact like one big one. Different positions have different impact of hits; however, players’ will then play more aggressively. Athletes dedicate their time into the game, and being the greatest they can be. The players’ would come back early from their injuries to get back on the field to play the game they love. There is no true answer on how to prevent injuries because it’s the risk each player is willing to take, and they know the consequences. In the end, it’s all about the fans’.

Today, more ex-athletes suffer from brain diseases from injuries they receive during a game later in their life, researchers’ have found. The evidence that neuropathologist, Bennet Omalu has discovered from studies on ex-N.F.L. players’ has been included to support the author’s point. He is well respected and considered reliable because of his title. This study was performed back in September of 2002, so it is a decade outdated and may not be considered current.

The information is relevant to the claim the author is making because he states that researchers’ are studying the brains’ of ex-football players’ to examine the long term effects of hits received during a game. I agree with the author’s use of language because he clearly uses professional and reliable researchers’ to make accurate diagnosis and statements. It helps me to better understand how severe the game of football really is. His neutral tone is just meant to inform you of the injuries and illnesses of football.

As long as fans purchase ticket’s to go to games, and merchandise to support football, the players’ will continue to play hard regardless of the injuries the may face. The evidence that has been included to support the author’s point comes from a quote by Dr. McKee. Ann McKee is well respected and considered reliable because she is a doctor and a hospital researcher. I believe this is still current today because the same injuries occur in football, and the players’ still have “gameness.” The information is relevant to the claim the author is making because the players’ still uphold themselves to sacrifice their bodies’ to win games regardless of the mental illnesses they may face later in their life. I agree with the author’s use of language because he says, “there is nothing else to be done, not as long as fans stand and cheer.” This influences me because I have purchased tickets to go watch the New York Giants’ play as well as merchandise.

Malcolm Gladwell’s focus / view on “Offensive Play” is to provide you with the information that researchers’ have studied and found on former football players’ brains from the hits they received during the game. Mr. Gladwell, was indeed effective in reaching the audience because I felt impacted, and more knowledgeable upon reading the article of the dangers and injuries of the N.F.L. Mr. Gladwell, therefore accomplished his purpose to make you aware of these issues, and he used evidence from researchers’, doctors’ and former players’ to back up his article. 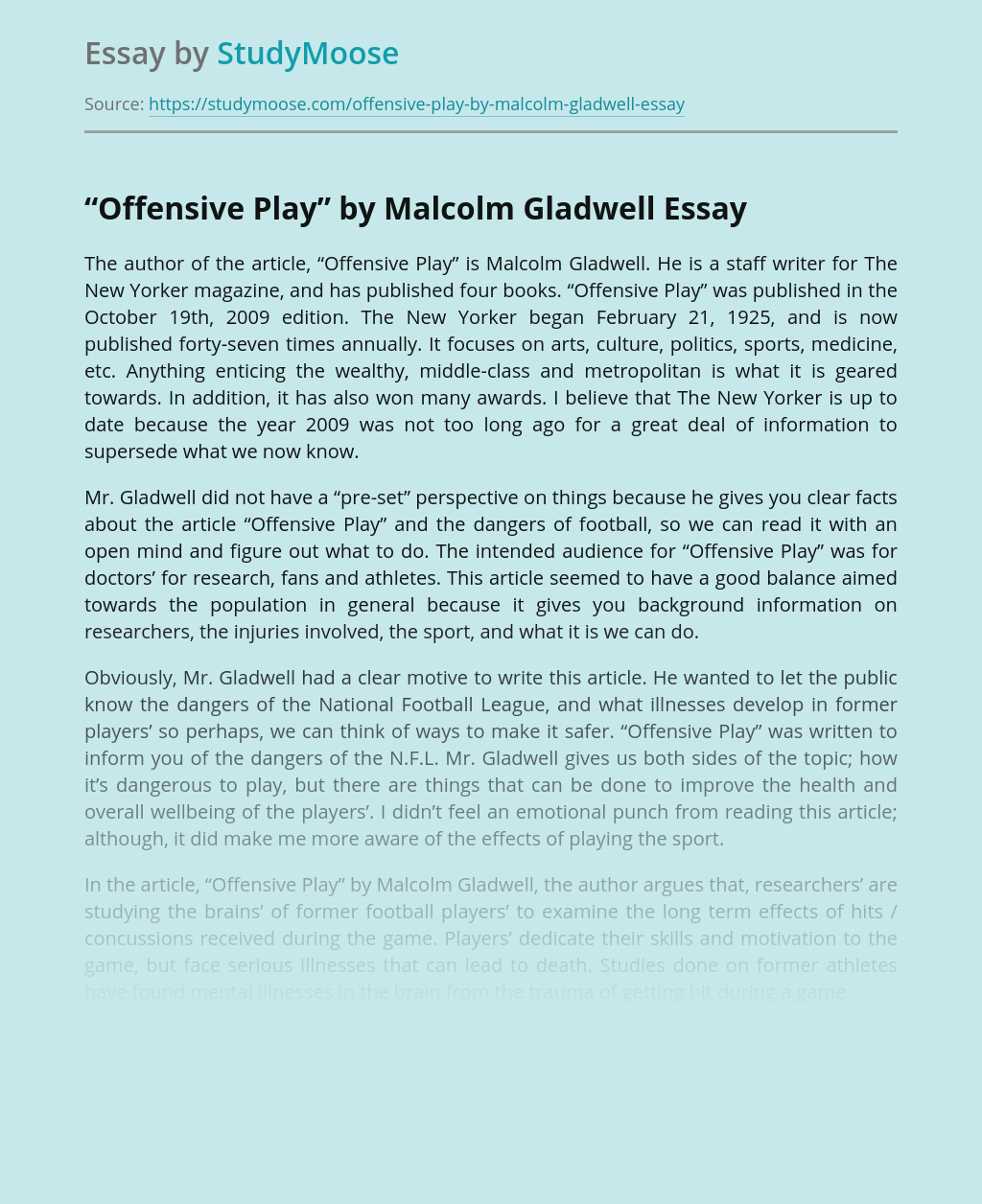 Turn in your highest-quality paper
Get a qualified writer to help you with
“ “Offensive Play” by Malcolm Gladwell ”
Get high-quality paper
Helping students since 2015
Stay Safe, Stay Original