Of the Dawn of Freedom

In “Of the Dawn of Freedom,” author W. B. Du Bois (1903) points out the historical basis for the persistence of racism as a problem. Written almost three decades after the civil war, the text is addressed to both African-American and White people who comfort themselves with the illusion that the granting of the right of suffrage to African-Americans instantly solved the problems of inequality.

This is evident in how Du Bois illustrates that contrary to popular perception, the Civil War did not totally lead to the emancipation of African-Americans and that the subsequent “Negro suffrage ended a civil war by beginning a race feud” (34) wherein African-Americans became the subject of contempt of Southern White populations who fought against the abolition of slavery.

Don't use plagiarized sources. Get your custom essay on
“ Of the Dawn of Freedom ”
Get custom paper
NEW! smart matching with writer

Indeed, Du Bois’ observations accurately mirror the situation of African-Americans until today. Clearly, African-Americans are still subjected to deeply-held stereotypes that systematically degrade and debase them on the basis of what Du Bois calls “the color-line. (9)

Despite the abolition of slavery, African-Americans continued to be socially-marginalized.

Consequently, African-American’s situation as “a segregated servile caste” (37) after slavery was abolished only resulted in the formation of a double consciousness or an identity confusion owing to the lack of their clear role in society and their alienation from the dominant White culture. In effect, the abolition of slavery also uprooted both African-Americans and White Americans from the customs and clear norms that arose from centuries of slavery.

Without the delineations of the slave order, African-Americans found it difficult to establish their identity especially as the White Americans did not want to accommodate the ex-slaves into the folds of society.

It is therefore not surprising that African-Americans continue to be subjected to racist perceptions. As Du Bois rightly points out, the freedom of the Black Americans was immature in so far as the Whites regarded them not as their equals but looked condescendingly at the newly-freed Black people as their inferiors and “helpless wards. ”(34)

Of the Dawn of Freedom. (2016, Oct 25). Retrieved from https://studymoose.com/of-the-dawn-of-freedom-essay 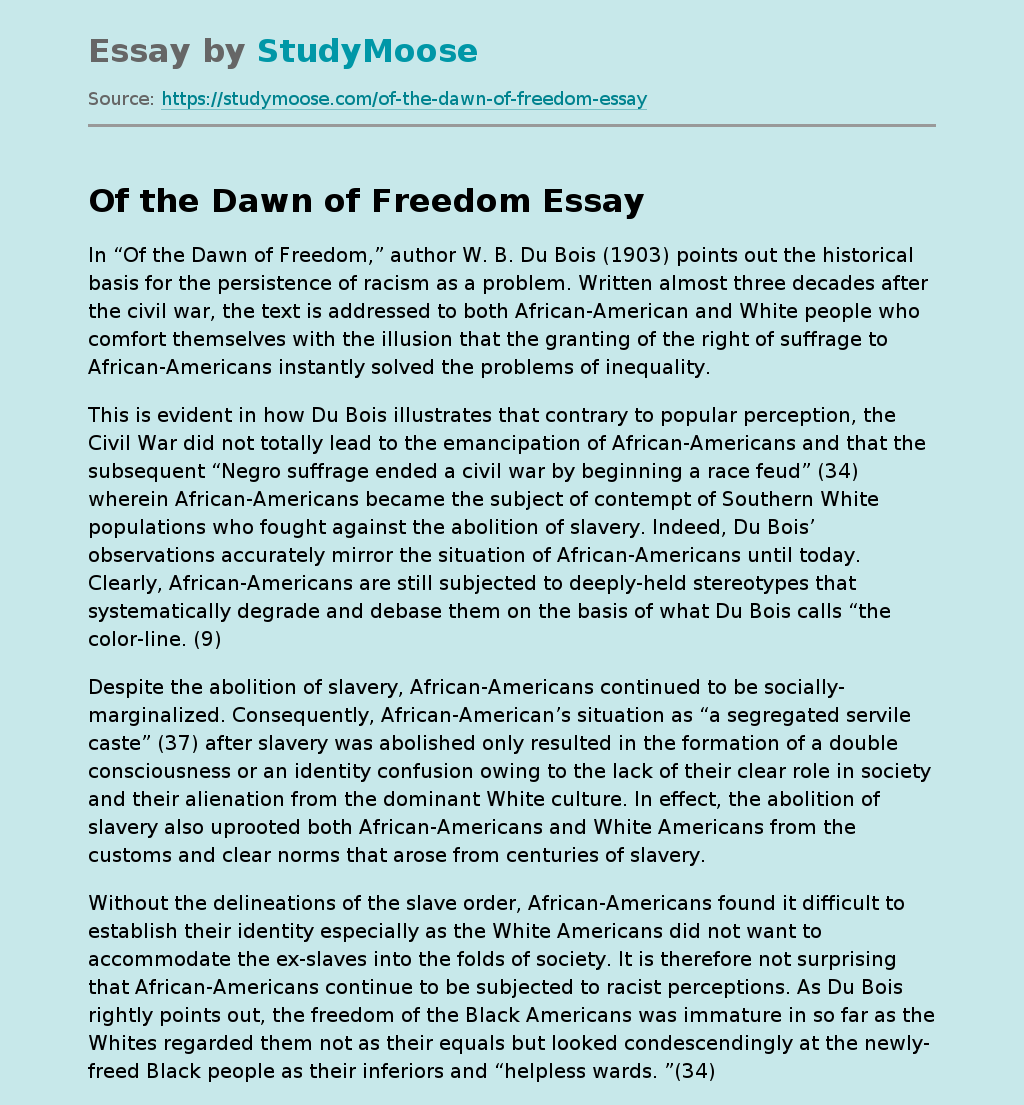