‘Of Mice and Men’: the relationship between Curley and Curley’s wife

In the novel ‘Of Mice and Men’, the relationship between Curley and Curley’s wife is very unstable lacking communication, love and respect. Additionally neither one showed attention for one enough, Curley liked to believe his wife was a possession this is shown by the quote ‘’you seen a girl around here? He demanded angrily’’ also ‘’ Go back home’’. These quotes implies that Curley is an extremely restless and always looking for her, furthermore he is an aggressive man, ordering people and getting away with it being the Boss’s son.

Don't use plagiarized sources. Get your custom essay on
“ ‘Of Mice and Men’: the relationship between Curley and Curley’s wife ”
Get custom paper
NEW! smart matching with writer

In the relationship neither one is happy, Curley’s wife is flirtatious by ‘putting her self-out there’ and ‘kicking her legs about’ which shows that she is lonely and lacking the attention needed. But, this must have been expected being the only women on the ranch. She also likes to manipulate and intimidate Curley which drives him crazy, but she enjoyed it, because it provided her power. Even though Curley’s wife despised Curley she could never leave him.

In the 1930’s, the year this novel was set, once married the women became the man’s belonging, and the women’s belongings also became his such as; money, clothes etc. Curley does care about his wife but is shown in an unexpected way, for example when Curley is trying to find her and being restless till he succeeds to do so. Even Whit tells him this by saying ‘’yella-jackets in his drawers’’ this means that Whit’s implying that Curley has ants in his pants.

Curley could be seen in either of two perspectives, either him being protective to her and being paranoid and not wanting to lose her to ‘lower’ class with-in the ranch. Alternatively people can see this as being controlling her, wanting to know where she is every second of the day.

Curley’s wife married Curley the day they meet, which can be seen as love at first sight or on the other hand a way to escape from her mum. Which was shown for by his wife; she had only married him because she didn’t get a letter from a guy to get her into Hollywood to gain her a step closer to becoming an actress there. She believed her ‘’o’l’lady stole it’’ which made Curley’s wife resentful. Moreover a lot of people from the 1930’s would have gone to see movies in Hollywood as w way to escape the reality of the depression if it could be afforded. And mass entertainment also a multi-million dollar industry additionally huge cinemas were built which could seat more people. Hollywood became a major film-making centre.

‘Of Mice and Men’: the relationship between Curley and Curley’s wife. (2016, Aug 18). Retrieved from https://studymoose.com/of-mice-and-men-the-relationship-between-curley-and-curleys-wife-essay 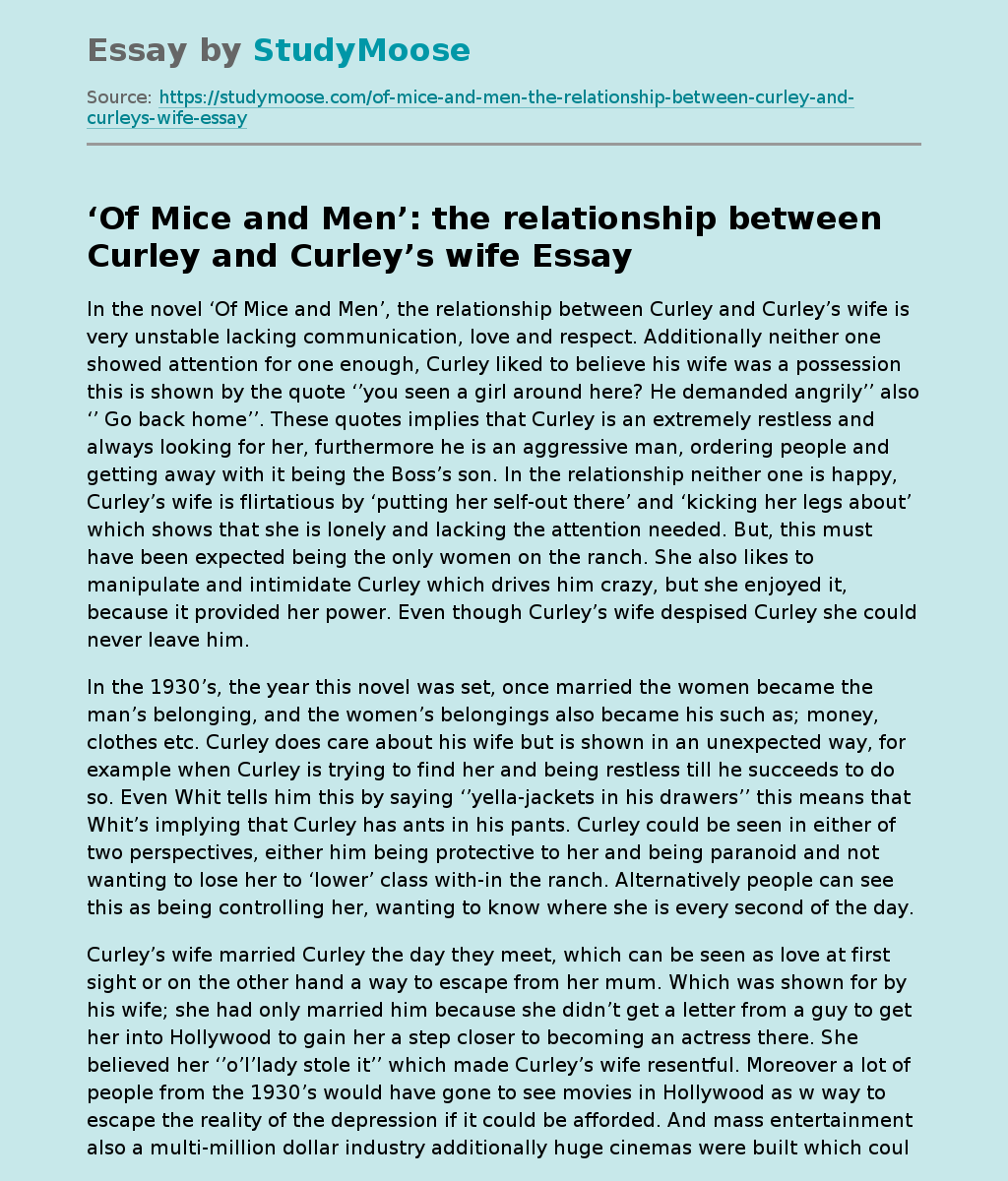