Of Mice and Men Is as Much a Commentary on the Lives of Migrant Workers and the Society of the Time as It Is About Lennie and George. Discuss

The novel ‘Of Mice and Men’ based in the 1930s during The Great Depression revolves around the thought of ‘The American Dream’. Life during the Great Depression was very harsh and difficult for the American workers as they had to travel long distances to find suitable jobs. The author John Steinbeck describes the lives of two migrant workers travelling together in search for work.

The American dream was the belief in freedom that allows American citizens to pursue their goals in life through hard work and bravery, this was seen to be the main factor that motivated most of the migrant workers to continue to find jobs and later on fulfil their own dream and live a happier life.

Don't use plagiarized sources. Get your custom essay on
“ Of Mice and Men Is as Much a Commentary on the Lives of Migrant Workers and the Society of the Time as It Is About Lennie and George. Discuss ”
Get custom paper
NEW! smart matching with writer

In the book ‘Of Mice and Men’ Steinbeck has made the ranch a micro representation of the society of the time because it contains all the elements of society.

George and Lennie’s only hope was to move around the country to achieve their dream due to The Great Depression, the dream was a typical American dream where there is a large piece of land with a small house and many different farm animals, throughout their travel George would usually use the their dream to control Lennie’s actions and behaviour.

‘Say’s I can’t tend no rabbits if I talk to you or anything. ’ Steinbeck is trying to represent how society controls the people in it by showing that George has greater control over Lennie. George threatens to take away Lennie’s ability to get his dream, if he gets into trouble.

However, if Lennie works hard he will get his dream. This is what society teaches us, Steinbeck is showing how difficult it is to survive and continue following your dream in society. For modern readers this is shown in the importance of working hard in their jobs keeping them motivated, civilised, striving towards feeding their families. George and Lennie travelled and worked together becoming inseparable, this relationship was found to be strange at the time as every migrant worker would have to take care of themselves only. ‘Guys like us, that work on ranches, are the loneliest guys in the world.

They got no family. They don’t belong no place…. with us it ain’t like that. We got a future. We got someone to talk to that gives a damn about us. ’ Steinbeck is expressing the strength between George and Lennie to emphasise the love for family and the feeling for caring for people in the outside society. Steinbeck shows the connection between them is very strong and was found very strange to the people in the ranch because they don’t understand the rule of family and friendship, the reaction from mainly the boss and Curly to this connection was seen as surprise and disbelief.

Lennie is sometimes represented like an animal in several scenes. ‘…and he walked heavily, dragging his feet a little, the way a bear drags his paws. ’ ‘Slowly, like a terrier who doesn’t want to bring a ball to its master, Lennie approached, drew back, approached again. ’ Lennie, George’s companion is seen as a big man with great strength, his body and his features are round and undefined. The author use of many techniques such as onomatopoeia, metaphors and similes to show the strange behaviour of Lennie, Steinbeck represents the ranch as the wider society because you get all the elements of society.

Lennie is described as the weak disabled people in society. Steinbeck is showing that due to the society not caring about the weak, he did not fit in due to his lack of mental abilities. The reader feels sympathy for Lennie combined with anger at the society for allowing this to happen. They also ask themselves how they react, in their society, to the weak and also how these people are treated within it. This is what Steinbeck wanted when he depicted Lennie’s situation. Steinbeck has represented Crooks in the ranch as a minority in the society. ‘They let the nigger come in that night’

Steinbeck’s point about differences in society shows the reader the whole view about racism. Crooks is seen as a low-life, crippled Negro who is under everyone’s standard. Steinbeck is making the reader feel sympathy for Crooks as he is seen as the lowest step in the hierarchy system, and showing that most of the people on the ranch are not educated and even though Steinbeck has made Crooks have the ability to educate himself to a higher standard than the rest he is still at the bottom, we as the reader understand that Crooks knows the law of society.

Overall the book ‘Of Mice and Men’ written by John Steinbeck is as much a commentary on the lives of migrant workers and the society of the time as it is about Lennie and George. Steinbeck has described all of the aspects of society and the relationship of George and Lennie in great detail throughout the story.

Of Mice and Men Is as Much a Commentary on the Lives of Migrant Workers and the Society of the Time as It Is About Lennie and George. Discuss. (2020, Jun 02). Retrieved from https://studymoose.com/of-mice-and-men-is-as-much-a-commentary-on-the-lives-of-migrant-workers-and-the-society-of-the-time-as-it-is-about-lennie-and-george-discuss-new-essay 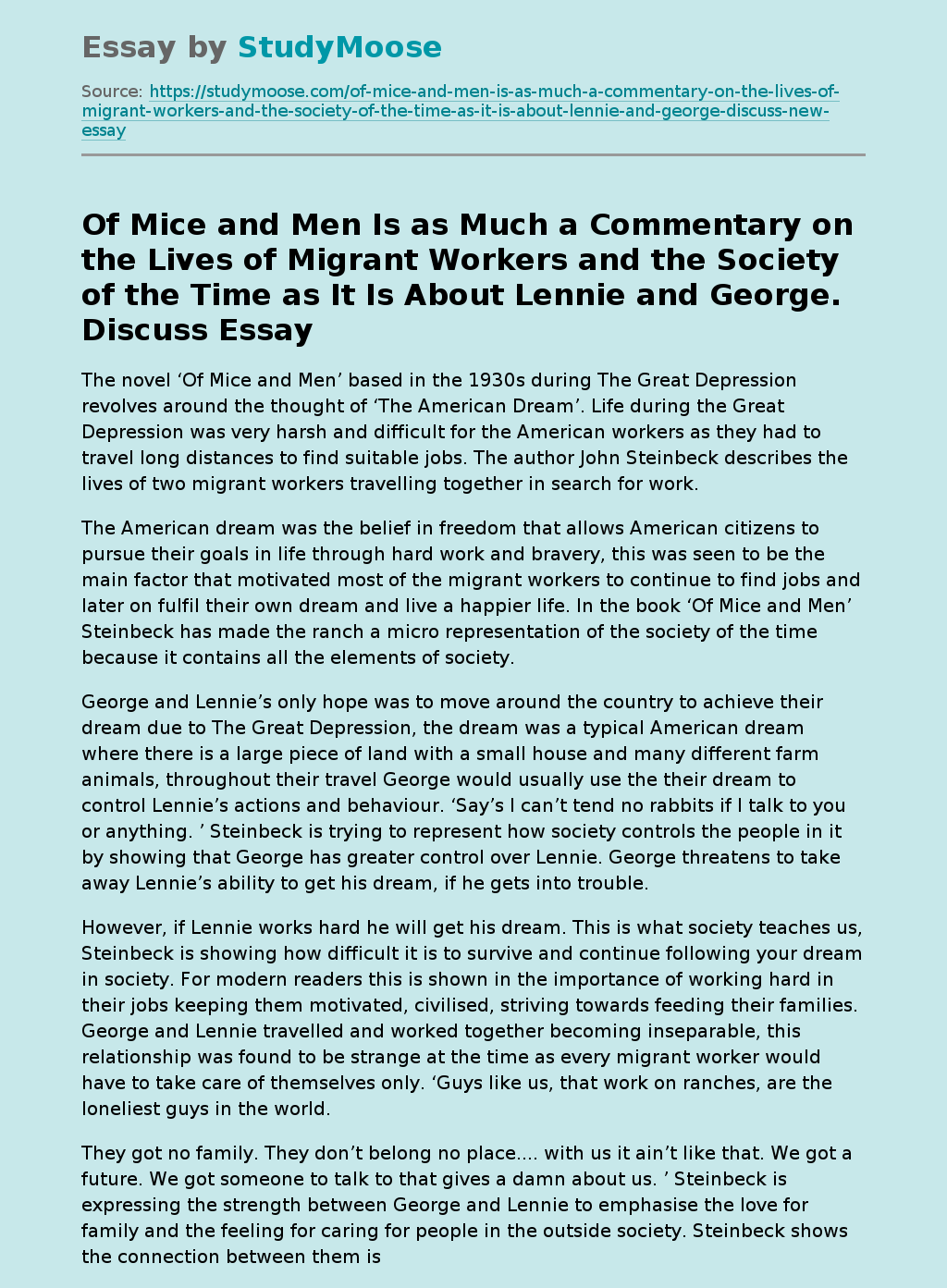