Of Mice and Men - Friendship

John Steinbeck shows how important a friendship is and how much two people can support each other to survive. Take this bond away and it will create a difficult and almost impossible journey for the two men in this novel. John Steinbeck portrays Lennie and George as having the greatest friendship in the world and while George claims to not need Lennie, he knows that he needs Lennie as much as Lennie needs him. The mutual relationship between George and Lennie is a genuine friendship between two very different men.

Lennie, a mentally handicapped, big man with stand out features and George, the small little tough guy, with the brains and great leadership skills.

As the two men are trying to escape from a mishap that Lennie is in fault for, George like always tries to back him up. George and Lennie met one day when George was talking to his friends and told Lennie to jump off of a bridge that they were both on.

Since Lennie is mentally challenged he attempted this brainless act and almost drowned. George feeling great sympathy for Lennie thought of it as an obligation to be friends with Lennie to pay him back.

As the two got to know each other they became great friends and didn’t stop. Knowing that Lennie was handicapped, George would always take care of him like a “cousin”. George proves that a good friendship is based on what someone’s personality is like, not how they look on the outside.

George sticks around with Lennie even when Lennie does make many mistakes and almost puts George into danger. On page 34 George and Slim have a conversation. “You guys travel around together?”

“Sure, we kinda look after each other”

This quote shows that George isn’t afraid to say he and Lennie travel around together and isn’t embarrassed by his company. Throughout the whole novel, George always compliments Lennie on his work and his positive abilities. Good friends always stick by each other. They always back each other up and they always help out when one of them is in need. Even though Lennie never contributes to helping George, the reason isn’t because he will not. The reason for this is because George never gets into any type of trouble. Lennie is always the one who needs help, but I’m sure of it that Lennie would help George in any circumstance. When George and Lennie talk to the boss George says to Lennie, “Let me do all the talking”. George proves to help Lennie out because Lennie is not too good with his words.

George and Lennies friendship grows stronger and stronger and it grows so strong that even the part when George kills him is a sign of caring. I believe that George has always wanted the best for Lennie and he knew that Lennie would either be tortured in the end or get killed anyways. When George kills Lennie, it is in my belief that this is the biggest act of respect and love towards Lennie. George never wants to see Lennie get hurt, so this is the only way he can let Lennie live a happy life without getting hurt inside. If I were George I would do the exact same thing. It’s tough letting go of a friend, but sometimes it in the best interest of your friend. The last circumstance that showed a great friendship was when George said “We gonna get a little place (pg. 105). This showed that George wanted to settle down and live with Lennie for the rest of his life. George and Lennie had such a great friendship that they both wanted to live and know each other forever.

George promised chickens, rabbits, and everything else that Lennie would ever want. He proposed to Lennie and to himself a great life with an amazing companionship. Lennie, only in the end realized how great their friendship was. He realized he took many things for granted and one of them was George. Lennie realized how much George had done for him and was soon relieved that George didn’t hate him. It’s too bad that it took Lennie that long to realize how good of a guy that George was and how much that he meant to George. I think that the most important part of this novel wasn’t who died, or the dream that they wanted.

The most important thing was the closeness of the two main characters because it doesn’t happen often that a great mutual alliance is found. Usually a temporary friendship is established, like the one that almost everyone has at school. You don’t often find two students who are such great friends that they know each other until they die. Everyone is so obsessed with how expensive someone’s clothes or jewelry is that they don’t have time to look deeper into a person and find what’s inside them.

The future generation is filled with a large percentage of shallow people who don’t focus enough on the person. Popularity is more important to some people for four years (high school), than a real comradeship that lasts a lifetime. That is why I think that a great relationship is close to being the most important thing in life and I think that it is the message that John Steinbeck tried to deliver to his readers.

Of Mice and Men - Friendship. (2016, Oct 06). Retrieved from http://studymoose.com/of-mice-and-men-friendship-essay 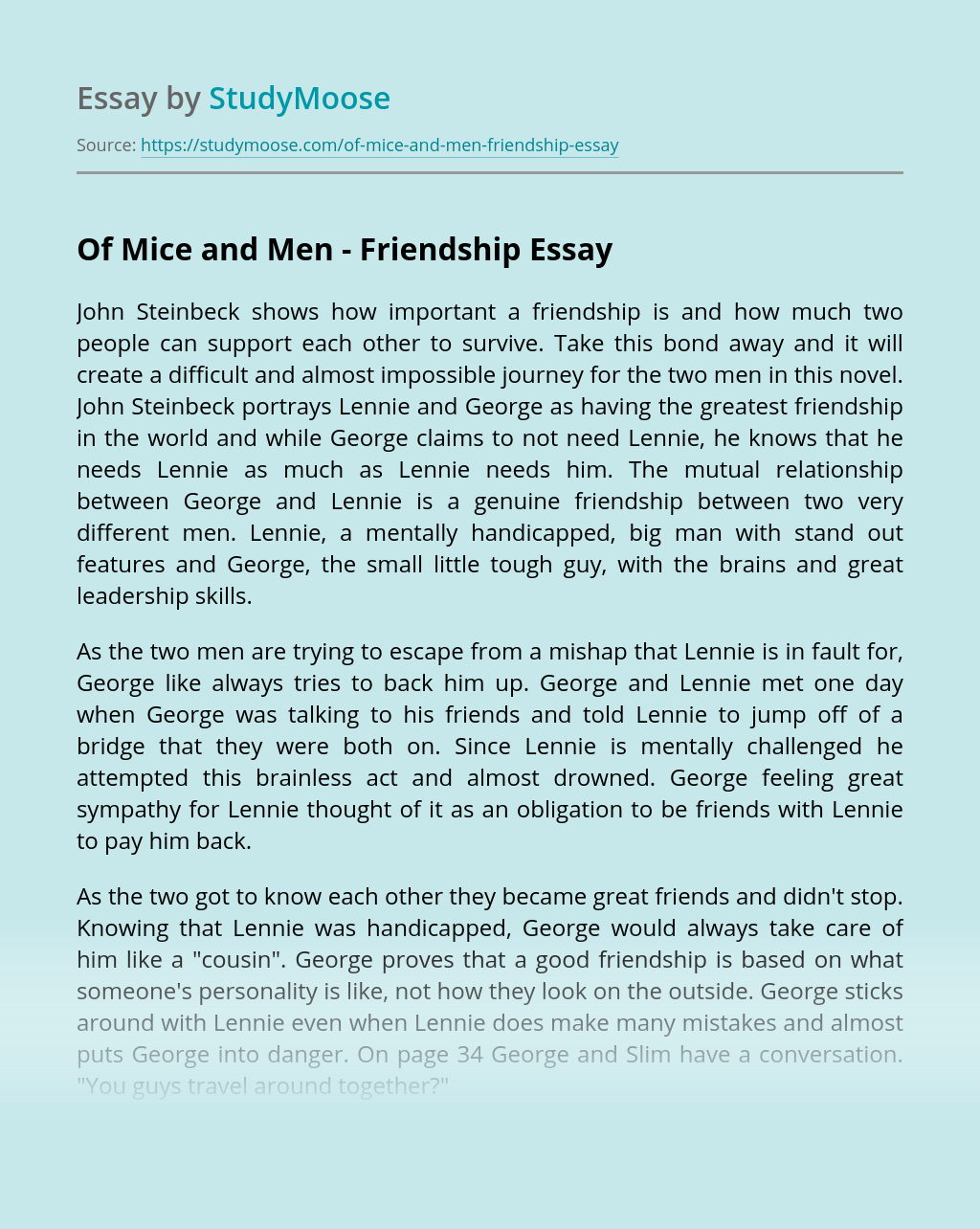 Don’t waste time
Get a verified expert to help you with Of Mice and Men – Friendship
Hire verified expert
$35.80 for a 2-page paper
Stay Safe, Stay Original