Of Mice and Men essay: The issue of racism

Racism features strongly in the novel Of Mice and Men by John Steinbeck. I think Steinbeck manages to sum up every thing that was wrong with racism and American culture of the time, whilst keeping his views to himself. Steinbeck decided not to write either for or against racism, he just gave you a few scenarios for you the reader to decide whether it was ethical, I think this was very effective as it provokes a response in the reader and also coincides with the plot and time that the story was written.

Don't use plagiarized sources. Get your custom essay on
“ Of Mice and Men essay: The issue of racism ”
Get custom paper
NEW! smart matching with writer

There is a lot of racial prejudice shown in Of Mice And Men towards Crooks the black and crippled stable buck. Crooks is a more permanent worker than the other ranch hands and has his own room off the side of the stable on the far side of the ranch in isolation. Crooks is separated from the rest because the other ranch hands do not want him in the bunkhouse with them because he is black.

As a result of this prejudice Crooks has become bitter, hating all white people because of this and has become very lonely and isolated.

Mainly during section 4 Steinbeck involves Crooks more and involves more racial issues linked with him. The language Steinbeck uses is of a racist context and mainly tells the story of discrimination against black people in the form of Crooks telling Lennie about how he is excluded from the others because he is black. “S’pose you couldn’t go into the bunkhouse and play rummy ’cause you was black.

Further more on page 41 Steinbeck writes to suggest that Crooks is sometimes used for entertainment, at Christmas Crooks was forced to fight with some one called “Smitty” “little skinner name of Smitty took after the nigger. Done pretty good, too. The guys wouldn’t let him use his feet, so the nigger got him” this quote clearly shows the way Crooks (described as a nigger) being attacked, probably in relation to the colour of his skin.

Crooks is often called names as well, for instance when Curley’s wife used her social status as a white person to over power him. “She turned to him in scorn. ‘listen nigger” and “well you keep your place then, Nigger. I could get you strung up on a tree so easy it ain’t even funny.” This shows Curley’s wife telling Curley how if he didn’t shut up she would have him hung, probably lynched, this sort of behaviour wasn’t uncommon and Crooks receives a lot of verbal abuse if he doesn’t conform to white peoples rules.

The conditions in which Crooks lives are sub-standard when compared to the others. “Crooks bed was a long box filled with straw.” (pg. 98) Crooks is described as sleeping in quarters and being treated no better than an animal. This is again, is clearly racism. Crooks also feels left out due to not being listened to. “If I say something, why its just a nigger saying it” (pg. 103) Crooks is saying that no one listens to him and his opinions are un-voiced and worthless.

I think that Steinbeck was very aware of what the impact of the language would create and I think that was the reason he used it, to quite simply clear up any naivety and get the message across about racism. Steinbeck was neither for or against racism, but used it as it was a part of life and more exeptable at the time the novel was written.

However in the culture we live today I doubt such a novel would be so accurate describing racism as such a common place and I also think that it wouldn’t be so acceptable as in general people today are more open minded and racism isn’t as common as it was in America during the 1930s. A few words such as nigger, for definite would not be used as it may offend readers and is no longer acceptable and many more changes along those lines would have to be made.

Overall racism was a part of life when the story was set and I think that Steinbeck has done a good job of describing in detail the sort of problems that arose whilst sticking to the plot of the story.

Of Mice and Men essay: The issue of racism. (2017, Oct 27). Retrieved from https://studymoose.com/of-mice-and-men-essay-the-issue-of-racism-essay 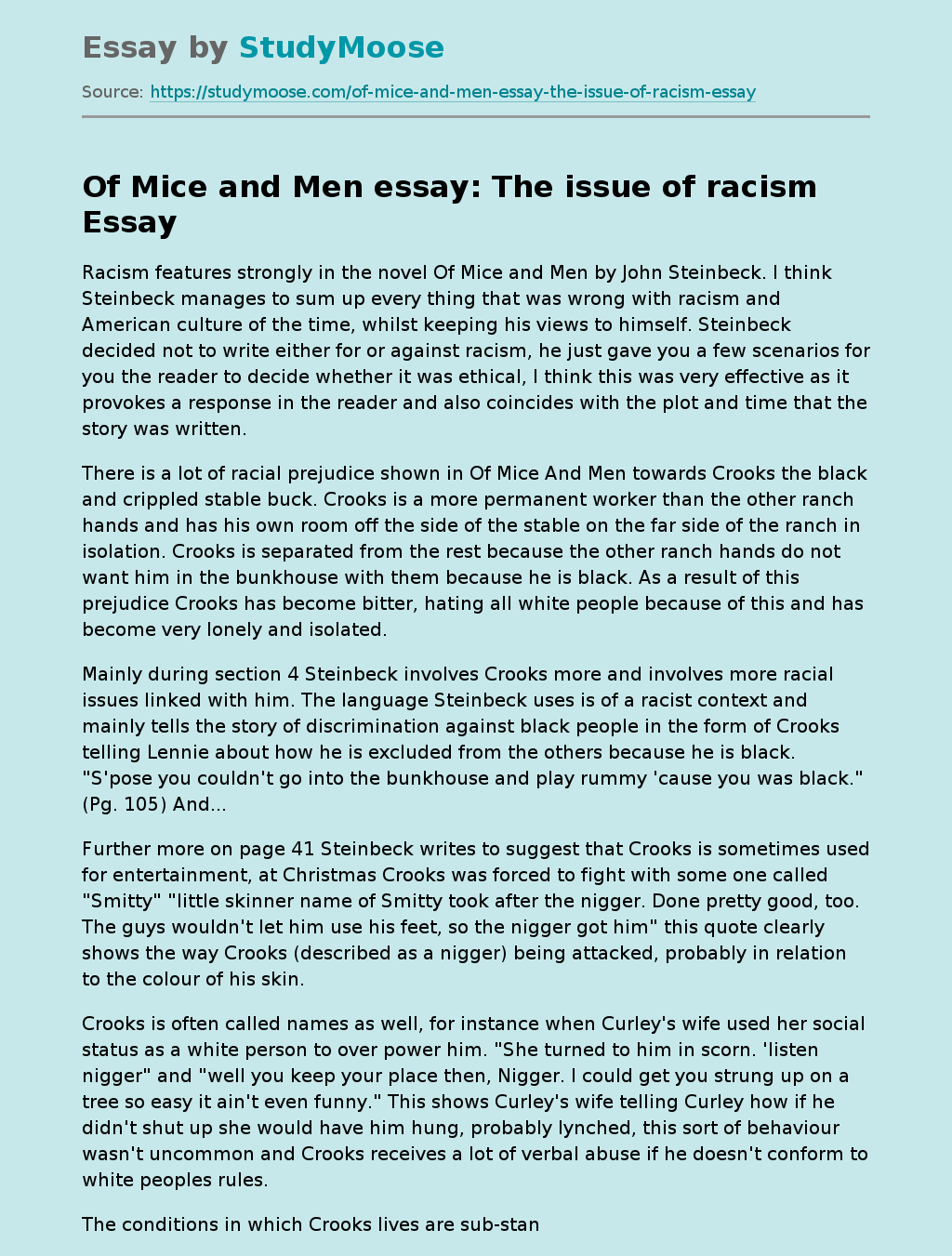