Of Mice and Men Essay

“The language of friendship is not in words, but in meanings” – Henry David Thoreau

While reading the novel, Of Mice and Men, the reader gets a front row view into the relationship of the two main characters, Lennie and George. In every friendship, there are dysfunctional moments, ups and downs, genuine moments and never ending adventures. By definition, a friend is someone to talk to, do things with, be there for each other in time of need and be each other’s crying shoulder.

Don't use plagiarized sources. Get your custom essay on
“ Of Mice and Men Essay ”
Get custom paper
NEW! smart matching with writer

Throughout this novel, Lennie and George display a friendship unlike any other. It is so dysfunctional and rare it makes the reader wonder why these two are friends. For example, the boss says “Well, I never seen one guy take so much trouble for another guy.” “I just like to know your interest.” In this quote found on page 25, the boss is trying to make sense of their friendship. Even though this quote highlights the rarity of George and Lennie’s bond, this causes the boss to suspect wrong- doing on George’s part.

At the end of the novel, George ends up shooting Lennie.

This perfectly displays the dysfunctional and rare qualities in their friendship. There are many ups and downs in Lennie and George’s friendship in addition to it being dysfunctional and rare. Lennie is mentally ill. There is absolutely no rhyme or reason behind his actions. For instance, without Lennie, George could “Go get a job an’ work an’ no trouble. No mess at all and at the end of the month I could take my fifty bucks into town and get whatever I want.

” This shows Lennie and George’s Relationship being down. Even though Lennie is a huge burden, George ultimately chooses to not be without him. Even though it seems like George is being held down by Lennie, George stays with Lennie because they both want the migrant dream. “Someday – we’re gonna get the Jack together, have a little house and a couple of acres an’ a cow and some pigs and we’ll have a big vegetable patch.”

Thus, these two cannot live without each other. Lennie and George have a genuine relationship too. George takes really good care of Lennie, almost like in a maternal way. George says, “Lennie, for God’ sakes don’t drink so much, you gonna be sick like you was last night.” This shows he cares about Lennie. In the beginning, Lennie assaults a lady by tearing the front side of her dress off in their old town Weeds. George could’ve easily left Lennie to fend for himself but he realized that wasn’t the right thing to do. Lennie hears his dead aunt Clara telling him “When he got a piece of pie you always got half or more’n half.” “An’ if there was any ketchup, why he’d give it all to you.” As the novel progresses, Lennie’s past catches up with him and the authorities start looking for him. George knows that if it is caught, the officers would throw him in jail and he wouldn’t survive.

So George shoots Lennie to basically put him out of his misery. Clearly, they have a genuine friendship. With every friendship, there are many adventures along the way. The novel starts off in a scenic woodsy area by a lake. Lennie and George run away together from their home town of Weed to run from the authorities and start a new life as migrant workers. When they’ve finally reached the barn, they meet new people and build relationships with them. The boss, Curley, Curley’s wife, Slim, Crooks, and Carlson. Lennie is always getting into trouble and George is always looking to get him out of it. Lennie kills a mouse, strangles Curley’s wife and also kills the dog. Although this book had many twist and turns, it was a heart- warming thriller that illustrated what life was like back in the 1930s. it surely wasn’t easy but having a dream meant a lot to the characters and made them strive to live their dream. 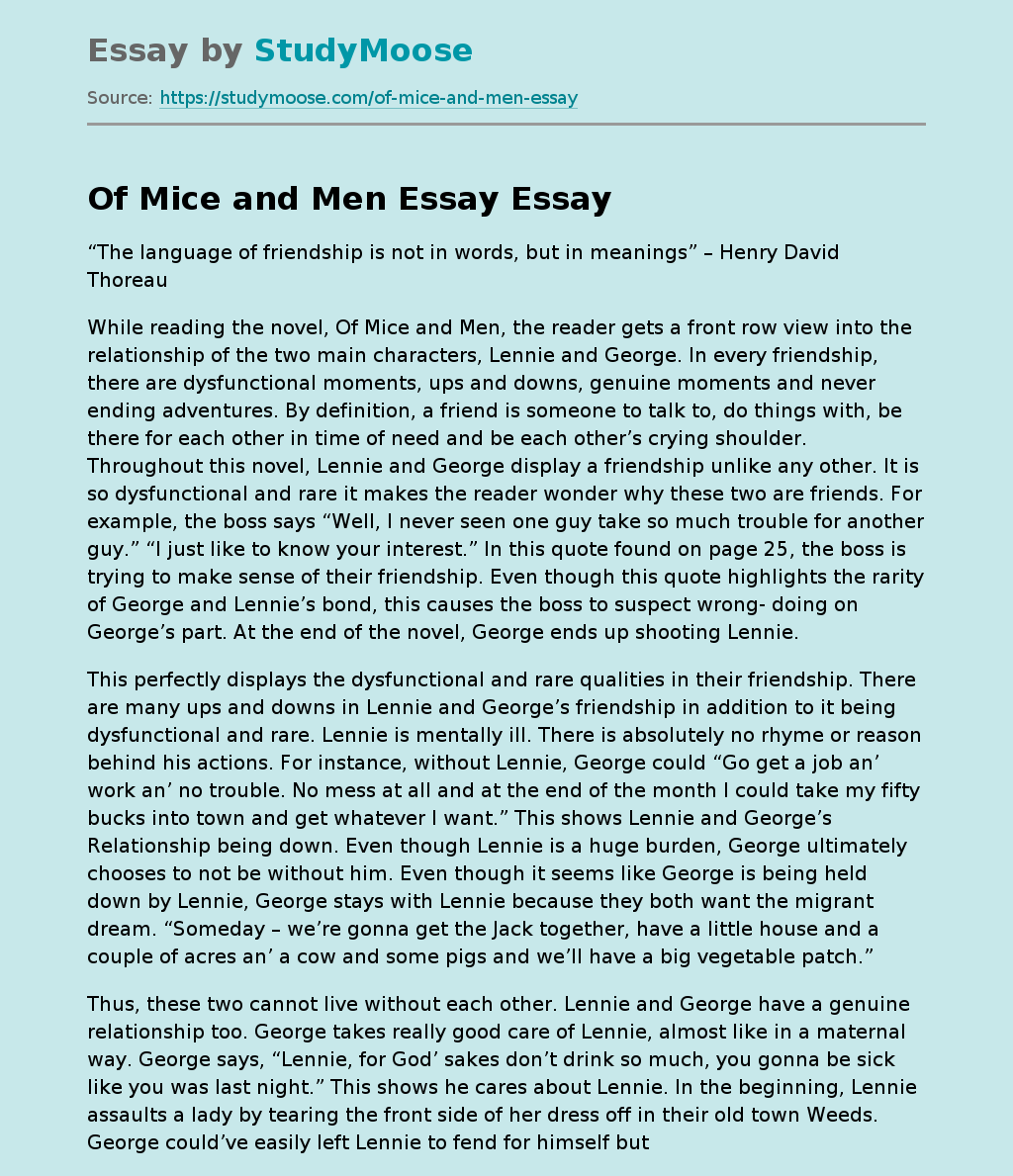