"Of Mice and Men" A comparison between the book and film

The similarity between the book and the film “Of Mice and Men” is most evident. Even so, there are a few differences, some insignificant and other crucial. However, in the majority of the scenes, the dialogs are taken literally from the book.

The first difference appears in the introduction of the film. The book starts by describing the surrounding landscape of the Salinas Valley where Lennie and George spend the night by the river. We learn that Lennie is mentally challenged and how this affected their stay at the farm where they previously worked.

Turn in your highest-quality paper
Get a qualified writer to help you with
“ “Of Mice and Men” A comparison between the book and film ”
Get high-quality paper
NEW! AI matching with writer

The film starts, however, by showing Lennie and George escaping from this farm and their journey to Salinas Valley.

Another difference that I noticed is concerning Curley’s wife. In the book there is a scene where Lennie, Candy and Crooks are gathered in Crooks’ room. After a while, Curley’s wife emerges and the atmosphere becomes unpleasant. Crooks finds the courage to stand up against her, and when he does, she verbally breaks him down.

In the movie this scene never takes place, and by eliminating this incident Curley’s wife’s destructive nature stays unrevealed.

The scene where George is about to shoot Lennie is also different in the film than in the book. In the book this episode is long and George has a hard time shooting Lennie. I get the impression that George is hesitating and unsure if this is the right thing to do. In the film the scene is much shorter and George appears considerably more secure .

The movie ends with a scene where George and Lennie work together on the little farm that they where planning to buy. This is not in the book at all.

Other scenes that were left out in the movie:The scene where Lennie has hallucinations about a giant rabbit and his aunt Clara.

The scene after George has killed Lennie. In the book Slim comforts George by taking him for a drink.

In my opinion both the film and the book has its flaws. In the film some crucial scenes are removed, but I thought that the characters in the movie were better than in the book. In the book, I liked neither George nor Lennie. I got the impression that George was a sensitive and kind man. He always watched over Lennie and tried do the right thing. In the film George is everything he is in the book, but he is also a wise man who people can seek advice from. He has an inquisitive and contemplating look about him. I also liked Lennie better in the movie. In the book he was just a mentally challenged character, but in the film he becomes a person with real feelings and I understand his actions on another level.

I believe that this would be a better film if they had shortened it. It seems to me that the film is an unnecessarily prolonged version of the book. On the other hand, taking to many liberties when adapting this modern classic into a film would not be a smart thing to do.. Even so, I still think that the filmmakers should have left out some insignificant scenes. The story however, is brilliant; the irony in the end where George kills Lennie out of love, how the story is composed of four major issues,(the value of dreams and goals, moral responsibility, social injustice, and the bond of friendship and loyalty,) and how loneliness is one of the main emotions. The story is brilliant and genius, and only an outstanding writer like John Stenbeck can create a masterpiece like this.

"Of Mice and Men" A comparison between the book and film. (2016, Jul 09). Retrieved from https://studymoose.com/of-mice-and-men-a-comparison-between-the-book-and-film-essay 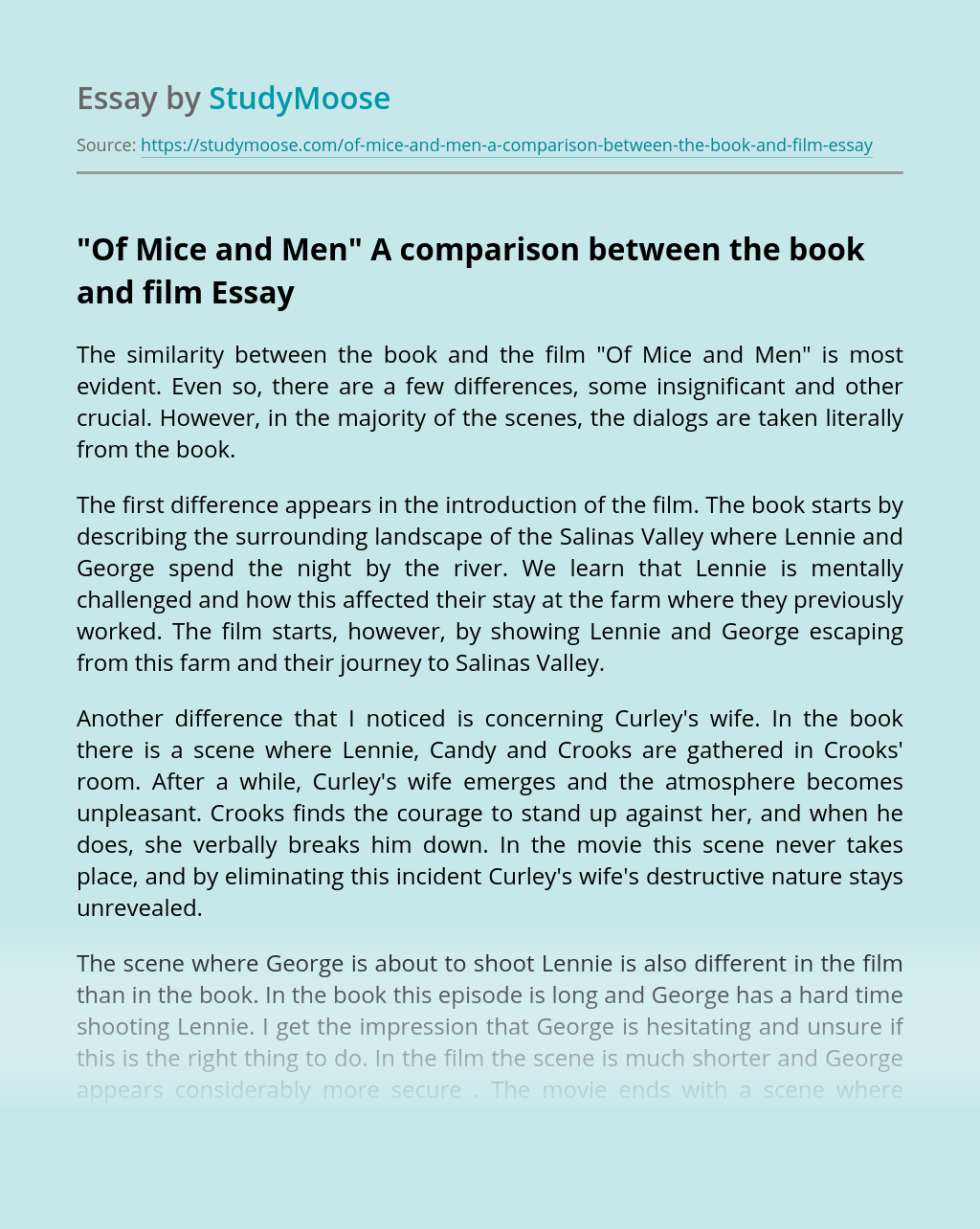 Turn in your highest-quality paper
Get a qualified writer to help you with
“ “Of Mice and Men” A comparison between the book and film ”
Get high-quality paper
Helping students since 2015
Stay Safe, Stay Original