Oedipus and His Tragic Character

22 May 2010 Oedipus and his Tragic Character In the play Oedipus the King we identify the classic tragic hero. The character, Oedipus Rex plays the role of the tragic hero perfectly. He shows the three main characteristics being talented and of noble birth, possessing a tragic flaw that causes the downfall and pain of everyone, and the recognition of responsibility. Oedipus’s first characteristic of being a tragic hero is being talented and of noble birth.

Oedipus is talented because during his journey to run away from his curse, the oracle foresaw for him, he stumbles upon the Riddle of the Sphinx in Thebes; Oedipus solved the riddle and is rewarded to be king and is given the old kings wife.

Don't use plagiarized sources. Get your custom essay on
“ Oedipus and His Tragic Character ”
Get custom paper
NEW! smart matching with writer

“You freed us from the Sphinx; you came to Thebes and cut us loose from the bloody tribute we had that harsh brutal singer” (Line 44). As Oedipus is being rewarded for his talents, no one knows that Oedipus is already of noble birth and is the true heir to this kingship.

Only the blind prophet of Thebes, Tiresias knew before anyone else found out that Oedipus is the old king’s son which made him nobility. “None of you knows and I will never reveal my dreadful secrets, not to say your own” (Lines 373-379) The next characteristic that shows Oedipus playing the tragic hero is him possessing a tragic flaw. Oedipus’s flaw is being a very narcissistic person. He might have been a good leader for all the years that have come to past but he is very full of himself and makes sure everyone remembers that he solves the riddle of the sphinx even though it is many years ago.

Another thing is if his people had problems like the plague that was spreading, no one is as sick as him because to him he had to be number one no matter what the situation. Lines 71-73 show his personality perfectly, “Well I know you are sick to death, all of you, but sick as u are, no is as sick as I”. This personality if his stirs up much trouble for himself that has the real truths of him surface in front of everyone, that he was the curse that the profit reveals to Laius and Jacasta.

Jocasta realizes that he is her son when he pushed the answers out of the messenger, and the messenger says, “No sir, another shepherd passed you on to me. He called himself the servant of… if I remember rightly-Laius” Now that Jocasta figures it out, she is so afraid that she keeps begging Oedipus to not push any further, to leave it alone, but he is not satisfied and needs to know where he come from and is he of nobility or a servant. Oedipus‘s recognition of his responsibility is very easy for him.

He keeps pushing for answers whether or not he is this curse the prophecies foresaw and he does get what he wants and puts the pieces together and figures out he is the prophecies curse, that he killed his father and he did marry his mother. “I’d never have come to this, my father’s murder-never been branded mother’s husband, all men see me now! ” Oedipus feels he is blind and could not see his fate with his eyes, and that he should have seen this coming. The next horror to come for Oedipus is for him to walk into the room where Jocasta hanged herself.

He runs to her and cut her down. This is the final act he could witness, and takes her brooches and gouges them into his eyes so he could never see the pain he has caused everyone again. The messenger states, “You, you’ll see no more the pain I suffered, all the pain I caused! Too long you looked on the ones you never should have seen; blind to the ones you long to see, to know! In conclusion, the tragic hero is a very intense role for a character to play.

As one may see in Oedipus the King, Oedipus is a character in the beginning one probably hated for his selfishness, but just had to feel bad for seeing all these mysteries unfold before Oedipus showing he was the curse that the prophecies foresaw, the one to murder his own father and then wed his mother. Work s Cited Brown, A. L. “The End of the Seven against Thebes” The Classical quarterly 26. 2 (1976) 206-19 Carloni, Glauco and Nobili, Daniela. LaMamma Cattiva: fenomenologia, anthropologia e clinica del figlicidio (Rimini, 2004) Dallas, Ian, Oedipus and Dionysus, Freiburg Press, Granada 1991. ISBN 1-874216-02-9

Oedipus and His Tragic Character. (2020, Jun 02). Retrieved from http://studymoose.com/oedipus-and-his-tragic-character-new-essay 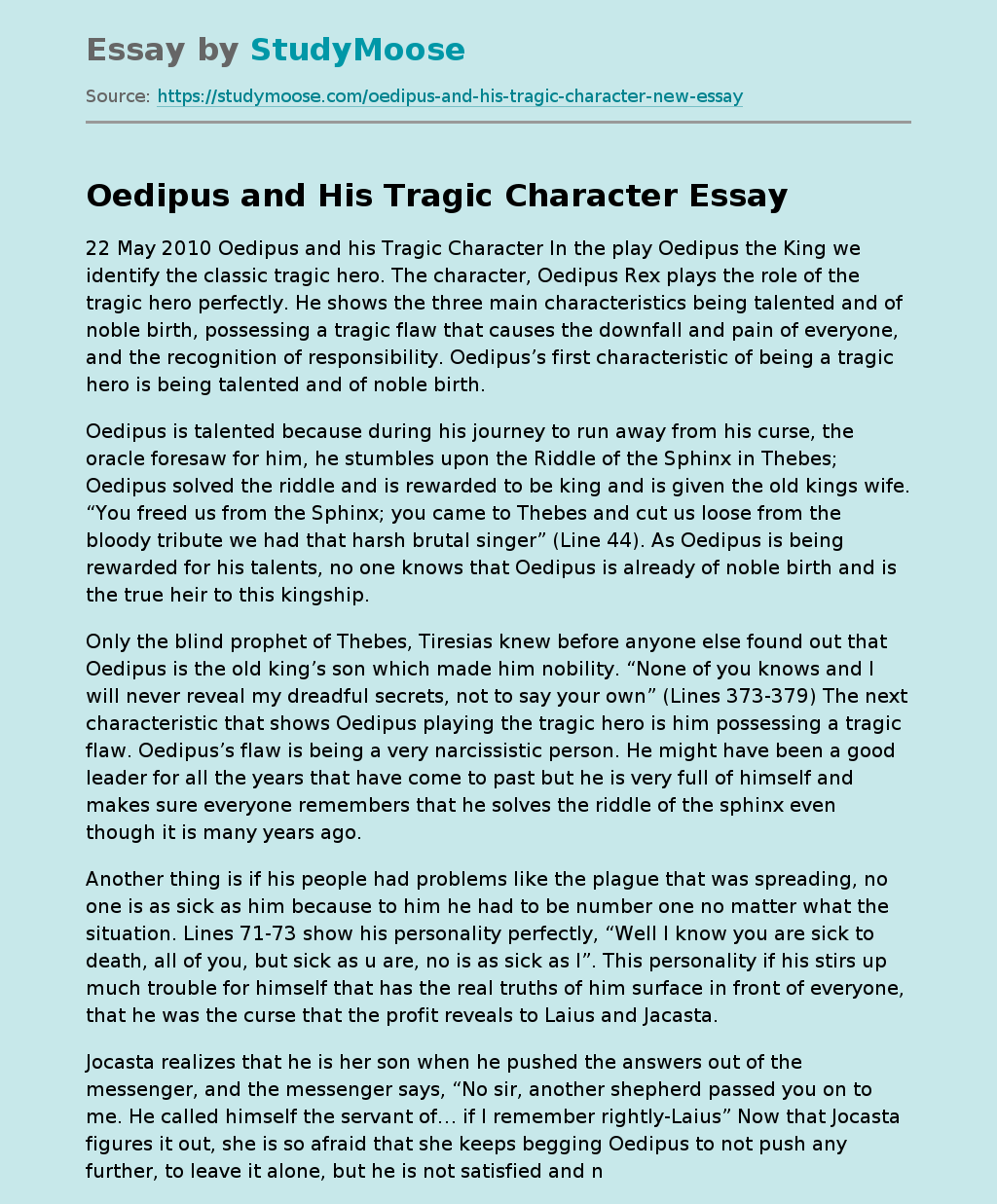