Oedipus and Creon: Leaders of Thebes

In the plays Oedipus the King and Antigone Sophocles portrays two characters, Oedipus and Creon, as rulers of Thebes.

Don't use plagiarized sources.
Get Your Custom Essay on Oedipus and Creon: Leaders of Thebes Just from $13,9/Page

In the eyes of the townspeople, Oedipus is seen as a good leader. He demonstrates the qualities any good leader possesses. When Oedipus learned of the plague that had spread through the town he immediately took action before the town confronted him with their fears. Upon meeting with the town, he notified them of his actions and his understanding of their concerns regarding the outcome of Thebes. Oedipus says, “You can trust me. I am ready to help, I’ll do anything.

I would be blind to misery not to pity my people kneeling at my feet” (Sophocles 159). We see that Oedipus is sympathetic to their needs and concerns and dependable as he had already sent his brother-in-law to gain information from the oracle

Upon Creon’s return from the oracle, Oedipus demonstrates his honesty, truthfulness, and determination as leader. Creon states, “If you want my report in the presence of these people…I’m ready now, or we might go inside” (Sophocles 163). Oedipus responds by asking Creon to report right then and there suggesting that he has nothing to hide and only truth to share with Thebes. The news from the oracle suggested that the only way to end the plague was to remove the source of Laius’s death, either by banishment or murder. Oedipus immediately seeks out to uncover the murderer of the former king. These qualities are those admired in a leader, like Oedipus, but hard to find in Creon.

Creon, unlike Oedipus, is seen as a poor leader of the town, Thebes. The qualities with which he rules are unlikable. Creon immediately instills a sense of fear as he acknowledges the absolute power he possesses in his initial speech as ruler of Thebes. “Whoever refuses to adopt the soundest policies but fearing someone, keeps his lips locked tight, he’s utterly worthless. And whoever places a friend above the good of his own country, he is nothing” (Sophocles 67). Furthermore, Creon issues a decree to his people that anyone who provides Polynices with a proper burial will face death. By enforcing the decree, Creon lacks sympathy for the beliefs of his town and his blood relatives, Antigone and Ismene.

When the sentry enters with a message for the King we learn that Creon’s rule focuses on threats and violence. The sentry hesitates to relay this message to Creon fearing that he would react harshly. Creon then demands that the sentry tell all that he knows. The sentry informs Creon that someone has defied the decree and given Polynices proper burial. Creon irrationally accuses the sentry; although he has spoken several times that he is not to blame. The king threatens the sentry saying, “Well now, you just be clever about your judgments – if you fail to produce the criminals for me, you’ll swear your dirty money brought you pain” (Sophocles 75). Terrified by the King’s word, the sentry quickly leaves to keep watch of Polynices and later returns with news that Antigone is the culprit.

We find that Oedipus is a good leader because he is honest, sympathetic, dependable and determined. On the other hand, Creon fails to sympathize with the citizen. The fear and violence of his absolute power became detrimental to his leadership. Despite these differences between Oedipus and Creon, the leaders did share some qualities that influenced the way they ruled.

Oedipus and Creon both ruled with pride. Each individual was proud of their actions and the way they lead the people of Thebes. At times they were so proud that they failed to believe what was being told to them. Tiresias proclaims to Oedipus, “You are the curse, the corruption of the land” (Sophocles 179). Oedipus refuted the truth, “Aren’t you appalled to start up such a story? You think you can get away with this?” (Sophocles 179) Tiresias warned Oedipus of his family curse and the he was the cause of the plague, but he failed to see this.

Similarly, Creon was warned by Tiresias in Antigone of the trouble that was to result from his injustice. “If he tried to make amends, however low he’s fallen, and stops his bullnecked ways. Stubbornness brands you for stupidity-pride is a crime” (Sophocles 112). Creon failed to accept the information told to him by Tiresias, instead his pride prevailed until he admitted his wrongdoings at the end of the play, at which it was too late.

The town of Thebes was also ruled by both with stubbornness. Once they had an idea set in their minds nothing could change it. Each had a firm belief in what they thought. Creon sentenced Antigone to death, since she was the individual who gave her brother, Polynices, a proper burial. Despite warnings from the town and Tiresias, Creon carried out the sentencing of his niece by sealing her in a cave. His stubborn character led to defiance of the Gods, which led to his downfall as King of Thebes.

In Oedipus the King, Oedipus goal was to save his people from the plague by removing the murderer, who was present in the town. Oedipus was stubborn and refused to see the clues which revealed the source of the plague. Eventually, Oedipus overcame his stubbornness and accepted the truth that he was indeed the source of the plague by murdering his father and marrying his mother. Oedipus, being a good leader, remained true to his word and banished himself from Thebes.

In conclusion, Sophocles portrays two rulers of Thebes in his plays Oedipus the King and Antigone. Oedipus and Creon share similarities and differences that characterize them as leaders of Thebes. Oedipus is seen as a good ruler due to the fact that he possesses the qualities the town seeks in a leader. Creon is deemed a bad ruler. He places himself above the state, people, and gods therefore being a feared and intimidating leader.

Oedipus and Creon: Leaders of Thebes. (2016, Jul 31). Retrieved from https://studymoose.com/oedipus-and-creon-leaders-of-thebes-essay 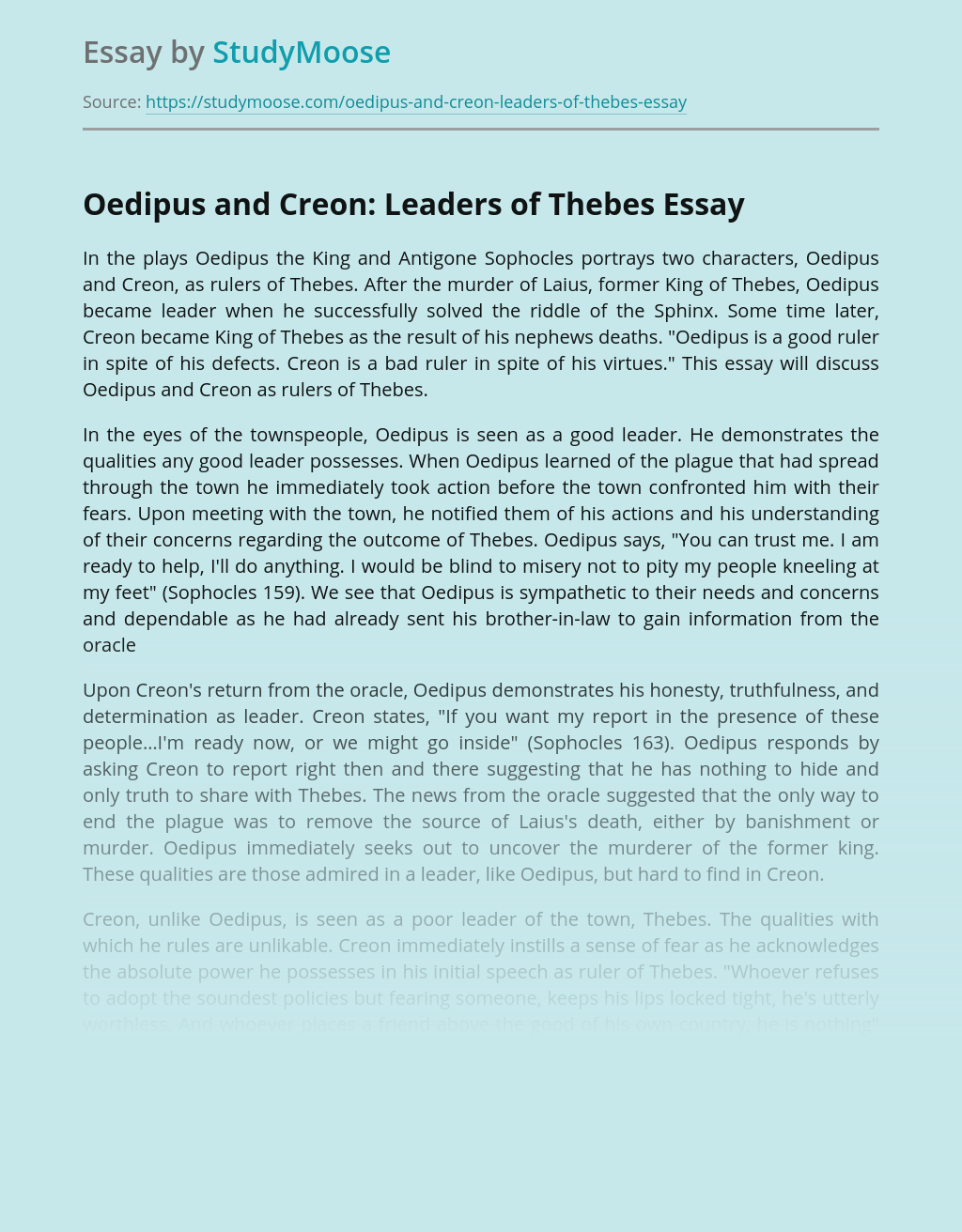 Comparison between Creon and Antigone in Oedipus the King

INTRODUCTION Human Rights are rights that belong to an individual or group of individuals as a consequence of being human. They refer to a wide continuum of values or capabilities thought to enhance human agency and declared to be universal in character, in some sense equally claimed for all human beings. It is a common...

As is archetypal to all Greek tragedies, ‘Medea’ by Euripides chronicles the downfall of a noble hero, Jason, as a result of a combination of factors like fate, hubris and the will of the gods. In ‘Medea’, the hubris of the main character, Jason, was his pride. This drove him to betray his wife Medea’s...

Compare and Contrast: Death of a Salesman & Oedipus

Compare and Cotrast Separated by almost 3000 years of literature, two plays can still contain similar elements and characteristics that tie the two together. This is the case between the two plays, Oedipus The King and its counterpart Death of a Salesman, one written approximately 430 BC and the other written in 1949. When first...

Laws were just as important to ancient societies as they are today, keeping an essential balance between interacting individuals. Without them, members of a society would be able to treat their fellow citizens in any way they wished, even if for purely personal gain. Some of these laws were made by the leader or leaders...