Oedipus - A Freud and Aristole View

“Oedipus the King” by Sophocles has been considered one of the greatest Greek tragedies. It is a Greek myth that may have been inspired by real events and people. With that thought in mind this play has indeed, help us get a better understanding of Aristotle’s, a philosopher, thoughts of a Tragic Hero and Sigmund Freud’s, a psychoanalytic theorist, thoughts on the affects of the same on our lives (especially male children and their psychological development). Both Aristotle and Sigmund Freud also belief that Oedipus was not in control of his actions, but in fact, was acting in a manner that was a part of his fate.

Don't use plagiarized sources.
Get Your Custom Essay on Oedipus – A Freud and Aristole View Just from $13,9/Page

Aristotle, found that Oedipus the King was not only an influential myth but also as a source of what defines true tragedy. He believed that you can not have a good or wicked man falling into misfortune or an evil man rising to fortune because none of those will inspire the feelings of pity of fear, which will help the reader or watcher of the play to reach his/her catharsis experience, which is a calling forth and purging of emotions.

Aristotle believes that the best type of tragedy occurs when a person whom is an average (or one who posses good and bad qualities) citizen undergoes a change in fortune. This is best portrayed when a respected individual with an excellent reputation goes through disaster that results in severe misfortune.

Oedipus the King meets the standards of Aristotle’s tragic hero definition. When Oedipus vows to find Laius killer to help end the plague that has fallen on the city, to help the city and himself (for he also feared that the killer may come for him) that showed us that average, but greatly respect characteristic. Then when he sought after the killer and realized that it was him and that he had to in-turn perform the punishment that he decreed on himself, that certainly helped the watcher or reader reach that point of catharsis.

In Oedipus the King, Sophocles presents us with a world in which certain actions and outcomes are inevitable for us to go through. It is from this concept that Sigmund Freud’s Oedipus complex stems. Freud makes a statement in The Interpretation of Dreams that;”There must be something which makes a voice within us ready to recognize the compelling force of destiny in the Oedipus… His destiny moves us only because it might have been ours… it is the fate of all of us….”Freud believes that we will all unconsciously experience a desire to have our opposite parent in a sexual manner and to show hatred toward the same sex parent. This unconscious desire is truly a conscious fear for reader or watcher of this play and there is expressions of pity on Oedipus’s behave because no one wants to see him or herself in Oedipus’s place.

Whether it is destiny (that which we feel that we may have a little control over) or fate (a future that has an unchangeable negative end) Aristotle and Freud’s interpretation of Oedipus the King, moves us all into a place were we are forced to acknowledge the powerful influence of such things.

Oedipus – A Freud and Aristole View. (2016, Jul 09). Retrieved from https://studymoose.com/oedipus-a-freud-and-aristole-view-essay 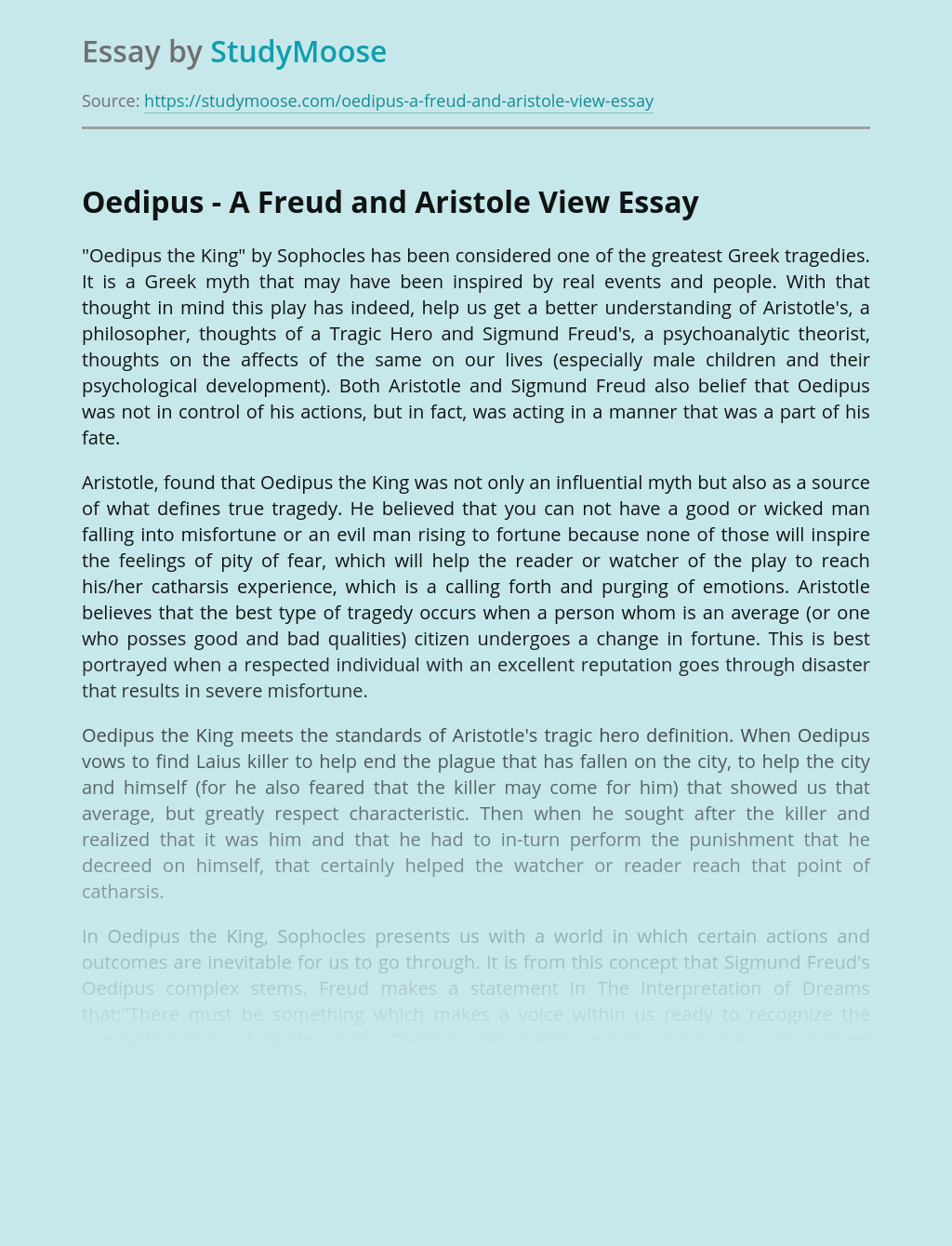 Abstract As a challenge to the incumbent directive and interpretive approaches of behaviourism and psychoanalysis therapies, person-centered therapy has revolutionised the direction of counselling theory and practice. As the name implies, person-centered approach views clients as the ultimate agents for self-change. It assumes that humans are essentially positively motivated and can be trusted to make...

Every single person has a personality that is unique to their persona, albeit they may look identical in appearance such as twins. Theories have been developed and fine-tuned throughout the last two centuries, and most notably by some of the more well-known psychologists of the last century. Alfred Alder, Carl Jung, and perhaps the most...

Heinz Hartmann’s Ego Development and Adaptation was a more comprehensive development of Sigmund Freud’s theory of Psychoanalysis. In the theory Freud divided the human mind into the id, ego and superego with each part having a specific function. The id was the internal instinctive drive for satisfaction of basic human needs and desires. The ego...

Psychoanalysis of Mary Karr's Mother in The Lair's Club

Mary Karr growing up in 1961, Leechfield, Texas, as gone through a lot of hardships, she describes those of her childhood in her memoir’s of The Lair’s Club. Mary only learns of why her mother, Charlie Marie Karr, has become wavering and potentially hazardous to Mary and nine year old sister, Lecia, towards the end...

In normally, most of individuals are experienced in any condition of stress and anxiety and anxiety as part of their life. Good mental health is defined as an individual whose capability to please in any condition as well as sustain his/her brain’s health in great relationships to others. (Grohol, 2008) However, Kendra Cherry (2010) educator...