Ode to the west wind - questions and answers

What is the tone of Stanza I? Explain.

Stanza I has a tone of calm and sensuality created in it. The poet is only depicting the real image he sees in front of him, explain the monotony of an Autumn Day “conversing” with the Wind. There are no feelings involved in the depiction of the nature.

How is the wind both destructive and preserver?

Shelley characterizes it as a destructive and fearsome force, yet it is also a harbinger of the inevitable coming of Spring.

It is, therefore, both Destroyer and Creator, and Shelley sees the West Wind as a symbol of the regeneration which will follow the destruction and “death” of Winter. The West Wind is celebrated as a harbinger of new creation, manifested in Spring, and also feared for its destructiveness and great power.

ƒæWhat is the tone of Stanza II? How does the author describe the clouds?

In Stanza II we find the poet to be rather uncertain and concerned with the violence and terror of air storms.

This would also be the tone of this stanza. Shelley seeks to emphasize the terrifying darkness of the storm scene, with its darkness and associations with death. The clouds are described as being dark, stormy, foreshadowing a bad, ill – tempered mood or aura.

Why is the poet using the imagery of waves in this poem about the Wind? What is the relationship between the Wind and the waves?

The waves are powerful just like the winds are. They forcefully hit anything they encounter.

The Wind and the waves disturb the monotony of nature, annoying and disturbing it, sharing this way one similar characteristic. The waves’ power is similar to the one that the Wind has.

What is the author asking for in Stanza IV?

Shelley likes himself, to a leaf, a cloud, and a wave, subject to the force of the West Wind, and asks to be borne aloft with it. He is asking, in effect, for a return to the raw power and energy he felt and knew as a child. In other words, Shelley is asking the force that provides inspiration to act through him.

How does Shelley want to be used by the wind in Stanza 5? What should his role in society be? How do you feel about this poem?

At this point Shelley makes the direct connection with his need to be inspired by seeing the wind’s force, and the impact made by the wind on forests, creating harmonies in his own mind and verse.

The wind as a form of inspiration will enable him to spread his message across the universe. He hopes that radical social change or rebirth of personal inspiration could be accomplished without violence.

I agree with him about accomplishing things without violence, but I am not so sure about the way he describes or wants to achieve it. The final effect of the poem is ambivalent, a mixture of depression and hope. I notice a certain degree of uncertainty in him. He characterizes the wind and the clouds as being violent, spreading terror, and dangerous, while I think that is a very preposterous opinion he has, and should make it obvious that that is just his opinion, and it is not necessarily true because other people might think differently.

I sense insecurity in him, and with his poem is transmitting it to the reader. Natural phenomenon has nothing to do with his capabilities as a person. He is getting old, and that is life! I believe he is being very stubborn and unreasonable to ask for power, force, and energy from the Wind, and at the same time give negative qualities to it.

Ode to the west wind - questions and answers. (2016, Jul 03). Retrieved from http://studymoose.com/ode-to-the-west-wind-questions-and-answers-essay 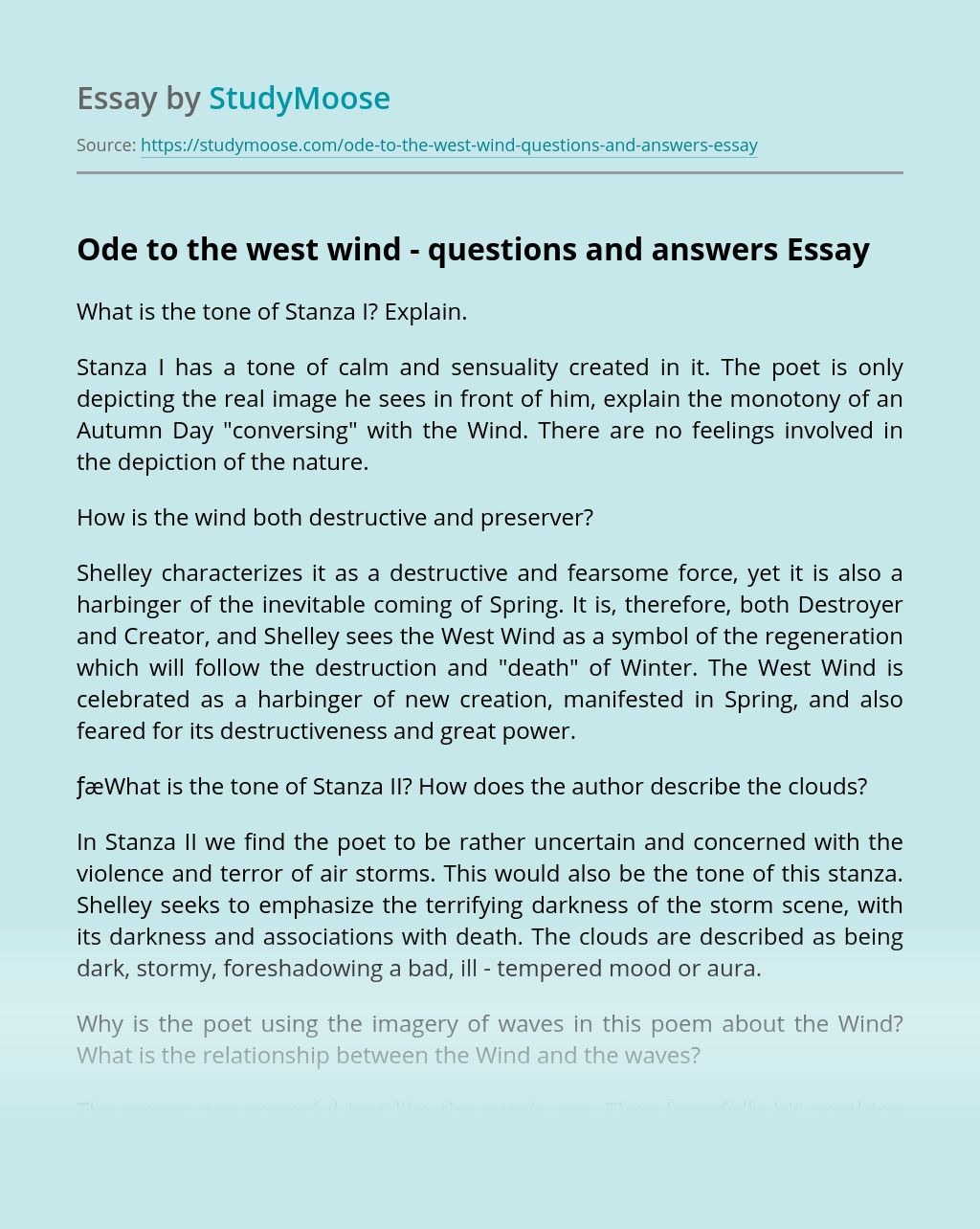 Don’t waste time
Get a verified writer to help you with Ode to the west wind – questions and answers
Hire verified writer
$35.80 for a 2-page paper
Stay Safe, Stay Original