"Ode to a Nightingale" and "To Autumn" by John Keats.

Romanticism is a movement in literature that came as a result of a revolt against the previous period “Classicism”. John Keats was an English poet who became one of the most important Romantic poets. William Wordsworth, another significant figure during Romanticism, described it as “liberalism in literature’, meaning the artist was free from restraints and rules, and was encouraged to write about his/her own experiences, rather than being a passive narrator praising an event or person. Romanticism emphasizes on passion rather than reason, imagination rather than logic, and intuition rather than science.

Don't use plagiarized sources. Get your custom essay on
“ “Ode to a Nightingale” and “To Autumn” by John Keats. ”
Get custom paper
NEW! smart matching with writer

The Romantics were drawn to the medieval past, myths and legends, supernatural being, and nature.

Keats led a very tragic life. His poems can often be related back to his bitter and sad experiences in life. Many of the ideas in Keats’s works are quintessentially of Romantic nature: imagination and creativity, the beauty of nature, magical creatures or experience, and the true sufferings of human life. “Ode to a Nightingale” and “To Autumn” are two well known odes by Keats.

They both reflect some of the concerns in its context.

“Ode to a Nightingale” explores the sufferings of mortal life and ways of escape including alcohol, imagination and poetry, and death. The nightingale represents transcendence to a better world and its song is the means by which the narrator reaches this state. Other Romantic poets often used this type of escape. In stanza I the narrator hears the song of a nightingale and he expresses his “drowsy numbness pains” which are not the effects of alcohol, but rather, from being so happy in hearing the song that his heart aches and his senses numbs.

In stanza II, the narrator longs for alcohol, so he can forget his troubles and “leave the world unseen” with the bird. This leads to stanza III, with a sombre description of the human life that the nightingale has never known: “The weariness, the fever, and the fret”, “Where youth grows pale, and spectre-thin, and dies”, “Where Beauty cannot keep her lustrous eyes”. Miseries and the true conditions of mortal life were popular themes in Romantic poems.

In stanza IV the narrator feels a great desire to fly away with the bird, away from grim mortal life and into an ideal world not through alcohol, but through imagination and the “viewless wings of Poesy” or poetry. In stanza VI, the narrator contemplates the idea of death. The narrator is attracted to the state of dying amongst ecstatic music, flowers, perfume and the soft darkness. At the end of stanza VII, the nightingale’s song portrays a completely magical and imaginary world. However, it is not like a paradise, instead, it is more like a destructive world of illusions “perilous seas, in faery lands forlorn”. Romantic poems often contained the fantasy element.

In stanza VIII, the narrator is jolted back to his reality world by the word “forlorn”. He realizes the bird has deceived him by convincing him he can escape into the ideal, but temporary world, but in the end, he will always have to come back to reality. The narrator is left with one last question to ponder –

“Was it a vision, or a waking dream?

After the music of the nightingale is finally gone, he is unable to distinguish whether he heard the bird in his dream, or whether he was awake then, and asleep now. The end relates back to his drowsy state of being in stanza I. This circular structure can be found in a number of Romantic poems eg. Wordsworth’s “Tintern Abbey”, Keat’s “La Belle Dame Sans Merci”, and a number of his other odes. Circularity gives a sense of completeness without giving precise explanation to this experience.

This poem has many characteristics in a Romantic ode including the poet’s involvement in the poem, the seriousness of the issue being discussed, and a further insight into life. Also many language techniques used by Keats, including alliteration, rhythm, rhyme, onomatopoeia, synaethesia, and personification, were commonly used by other Romantic poets. Like most other Romantic odes, “Ode to a Nightingale” is written in ten line stanzas. However, this ode is different in rhyme and rhythm. The first seven and the last two lines of each stanza are written in iambic pentameter, the eighth line of each stanza has only three accented syllables instead of five. The rhyme scheme is the same in every stanza: ABABCDECDE.

Keats uses alliteration to convey the tone and personification to dramatize the poem. Hippocrene (wine of poetic inspiration) is described as blushful, with “beaded bubbles winking at the brim”. The alliteration of ‘b’ sounds conveys energy and suggests fuzzy champagne. The repetition of soft sounds in “fade away into the forest dim” leads us to stanza III where the first three words “Fade far away” has the repetition of ‘a’ sounds, this lengthens and makes the tone subdued and melancholy. The alliteration of “fever and the fret” is followed by a series of phrases beginning with “Where”, this emphasizes the fact all these problems are associated with the mortal world. Beauty is personified here with having “lustrous eyes”. The first two words in stanza IV: “Away! Away!” renews energy after a grim stanza III. “Already with thee!” also quickens the pace. In stanza V, there are a lot of ‘s’ and ‘c’ sounds, which reflects the quiet mood. Death is personified in stanza VI, and the nightingale is personified in stanza VII. The bird is described as “not born for death”. The poem finishes in a regretful, quiet tone. The narrator and the reader are left to ponder the experience of they’ve just gone through. It ends with a mysterious note that many Romantic poems including many of Keats’s other poems also have.

“To Autumn” is an ode about the real world of harvest, maturity, and fruitfulness, transfigured by the imagination. This poem was one of the last poems Keats wrote before his death. In this, Keats acknowledges his life is near the end and he accepts that beauty is in all things. The theme of this ode is one of the most popular themes used by Romantic poets. The narrator opens the poem and stanza I by addressing Autumn as a dear friend of the sun “Close bosom-friend of the maturing sun”. They plot to load the vines with fruit, bend trees with apples, fill all fruit with ripeness, plump the pumpkins and fill flowers with honey for the bees. In stanza II, the narrator describes Autumn as a woman sitting on a granary floor, or on a half reaped grain field, watching juice from apples being squeezed by a cider press. Stanza III associates Autumn as the season on the brink of desolated winter, the songs and sounds of summer are sad and quiet. Our lives can be described in terms of seasons: spring is the beginning, summer is the peak, autumn is the maturing years and winter is the final stage in life.

The form of this ode follows the same structure as other Romantic odes but it is varied. It is in eleven line stanzas, each in relatively precise iambic pentameter. The rhyme scheme divides each stanza to two parts, the first four lines follows ABAB, while the last seven lines either follow CDEDCCE (first stanza) or CDECDDE (second and third stanza).

This poem takes up the themes of other odes including temporality, mortality and change, but it is full of warm, rich and calm images. Keats establishes the serene tone by use of enjambment (where an idea is carried over into a new line), onomatopoeia and personification. In stanza I, Autumn and the sun are given human qualities. The sun is personified by its maturity. A feeling of plentiful and abundance is created by what Autumn and the sun are conspiring to do. In stanza II, Autumn is completely personified, it is being described as a woman, sitting, sleeping, doing the things we humans do. This creates a feeling of warmth and familiarity. In stanza III, the day is personified as the “soft-dying day”, small gnats “mourn” in a “wailful choir” and the light wind “lives or dies”. These images convey a quiet, peaceful sleep (death). Keats demonstrates that in nature, there is the constant cycle of life and death and death is a perfectly normal, peaceful process. From this poem, we can learn that accepting our fate, destiny and our mortality does not affect our ability to appreciate beauty in our mortal world.

Romanticism was a period that focused on emotions, the imagination, the mortal world, myths and legends, supernatural beings and the place of the individual in this world. “Ode to a Nightingale” and “To Autumn” are typical Romantic poems. Their structure, language features, and themes reflects those typical during Romanticism. “Ode to a Nightingale” is about transcending to an ideal world, while “To Autumn” is about the real world changed by imagination. The moral of both is that there may be temporary escape from grimness of human life, but in the end everyone has to return to reality and accept our mortality, and this acceptance won’t affect our capability to appreciate beauty.

"Ode to a Nightingale" and "To Autumn" by John Keats.. (2016, Jun 21). Retrieved from https://studymoose.com/ode-to-a-nightingale-and-to-autumn-by-john-keats-essay 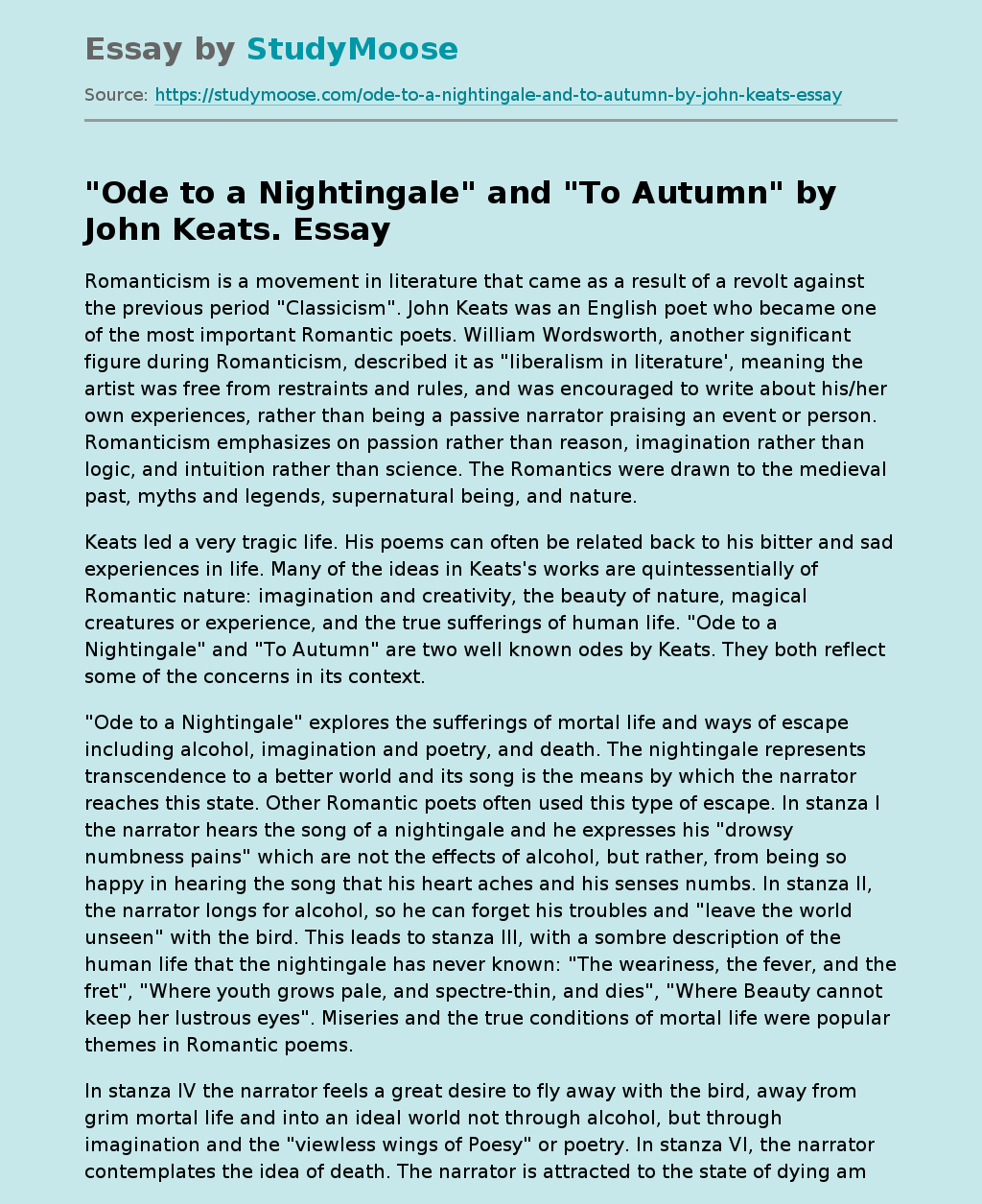