1. What is the composition of seawater?

The salinity of seawater ranges from 3.3 to 3.7%. When seawater evaporates it leaves behind sodium chloride, better known as table salt. The other components of seawater are acquired through various methods. One of which is weathering. Chemical weathering of rock releases soluble such as salts of sodium, potassium, and sulfur.

2. What are the three major layers (zones) found in the ocean?

Describe each layer briefly. The three layers of the ocean are the surface layer, the thermocline, and the deep zone.

Don't use plagiarized sources. Get your custom essay on
“ Oceans and Atmosphere Worksheet ”
Get custom paper
NEW! smart matching with writer

The surface layer goes up to 100 meters deep and consists of low density, warm water. In the thermocline temperatures decrease rapidly as it extends to depths of 1500 meters. The deep zone maintains a cold temperature of about -2 degrees Celsius and extends to the ocean floor beyond the thermocline.

3. What is an ocean current?

Surface ocean currents are caused by winds. Wind presses on the ocean’s surface and forces the water to move along with it.

These currents range from 50 to 100 meters in depth and are contained to the surface layer. Deep ocean currents are caused by several factors including temperature and salinity, which accounts for the water’s density.

4. How do oceans regulate climate?

There are several ways in which the oceans regulate the climate. The oceans act as a sink for excess carbon dioxide which helps to regulate the greenhouse effect. Also there is a heat exchange that occurs within the ocean that is extremely important. Water can be heated more efficiently by the sun’s rays rather than land.

The sun’s ray’s can penetrate much further into the water. Water has a higher heat capacity than land. Latent heat also plays a role, as water is frozen heat is released and as water in unfrozen heat is absorbed.

5. What causes a change in sea level?

Tides are caused by the gravitational pull of both the moon and the sun. The moon being closer has a greater effect on tides. Water on the side of Earth closest to the moon bulges toward the moon. There is also a bulge away from the moon on the opposite side of the Earth.

7. What is the relationship between plate tectonics and the ocean floor—seafloor spreading, for example?

8. What are different ways that earth materials are moved around in the oceans?

Surf is a powerful force. It causes erosion and moves sediment from one location to another. Currents are another manner in which materials are transported through the ocean system. There is a longshore current and a beach drift responsible for disturbing and transporting materials.

9. What are the different types of shorelines?

Describe each type briefly. There is a rocky coast, lowland beach and barrier island, as well as coral reef. A rocky coast describes the most common type of costal area. This is where there are vertical wave cut cliffs and horizontal bench cut cliffs. The erosion undermines the cliffs and sends the resulting debris into the ocean forming rough outcroppings. Beaches are not only the sand areas on land they extend into the sand in the surf zone. During low tide, sands are sometimes blown onto land creating dunes or barrier islands. A coral reef is formed in an area where temperatures exceed 18 degrees Celsius but do not exceed 30. Also they are formed only at or above sea level. Coral is a limestone reef formed by a colony of organisms which secrete calcium carbonate as their skeletal material.

10. Why do waves change as they approach shorelines?

A wave changes as it approaches shore due to the fact that a wave exists not only on the surface but also below water. As a wave approaches shore it comes into contact with the shallow sea floor and this begins to distort the loop shape of the water movement. It causes the wave height to increase while the wavelength shortens.

1. What is the composition of the Earth’s atmosphere?

Air is what envelopes the Earth. Air is invisible and typically odorless. Air has two highly viable components that are aerosols and water vapor. Aerosols are liquid and solid particles so small that they remain suspended. Water vapor in air is expressed in terms of humidity. When ignoring aerosol and water vapor these gasses, termed dry air, are present and known as nitrogen, oxygen, and argon. There are more gases that make up a very minute portion of the atmosphere but play a vital role known as carbon dioxide, neon, and six others.

2. What are the four major layers of the Earth’s atmosphere?

3. What is the greenhouse effect?

The greenhouse effect is how the Earth’s surface is heated. Greenhouse gasses such as water vapor, carbon dioxide, and methane absorb some of the outgoing infrared terrestrial radiation and prevent it from escaping.

4. How would you describe the ozone layer?

Why is the ozone layer important? The ozone layer is a protective area in the outer three layers of the atmosphere that protect the earth from harmful radiation by blocking particular wavelengths.

5. What is the relationship among the Earth’s atmosphere, the sun, and the rotation of the Earth?

The sun heats the Earth’s atmosphere and makes it a habitable planet. The earth is a sphere so the sun cannot warm every place on earth at once. This issue is solved by the earth’s rotation and its rotation around the Sun.

6. What is the Coriolis effect?

The Coriolis effect causes anything that moves freely with respect to the rotating earth to veer off a straight path. This can be demonstrated through long range missile launches that have been known to land far from their intended targets due to the earth’s rotation.

7. How would you define climate?

Climate is an average of weather patterns over a long period of time, generally on a regional or global scale.

8. How does the atmosphere regulate climate?

Atmosphere regulates climate through weather patterns created through the greenhouse effect. This process creates heat within water vapors and other gasses that are the main contributing factors in weather. Also the filtration of wavelengths by the upper atmospheres keeps the earth’s climate at a more even temperature.

9. What are the six global climate zones?

What are the main climate effects on people and the environment? The six climate zones are tropical, dry, temperate-humid, cold-humid, polar, and highland. Each zone is driven by solar energy which drives temperature, seasonality, precipitation which in turn fosters vegetation, . These factors make a zone habitable or non habitable.

10. How do the oceans and the atmosphere interact?

The oceans provide a great deal of moisture for the atmosphere. This moisture is a main component in heat exchange which leads to weather patterns. Water is in constant motion and plays a vital roles in the regulation of the atmosphere. 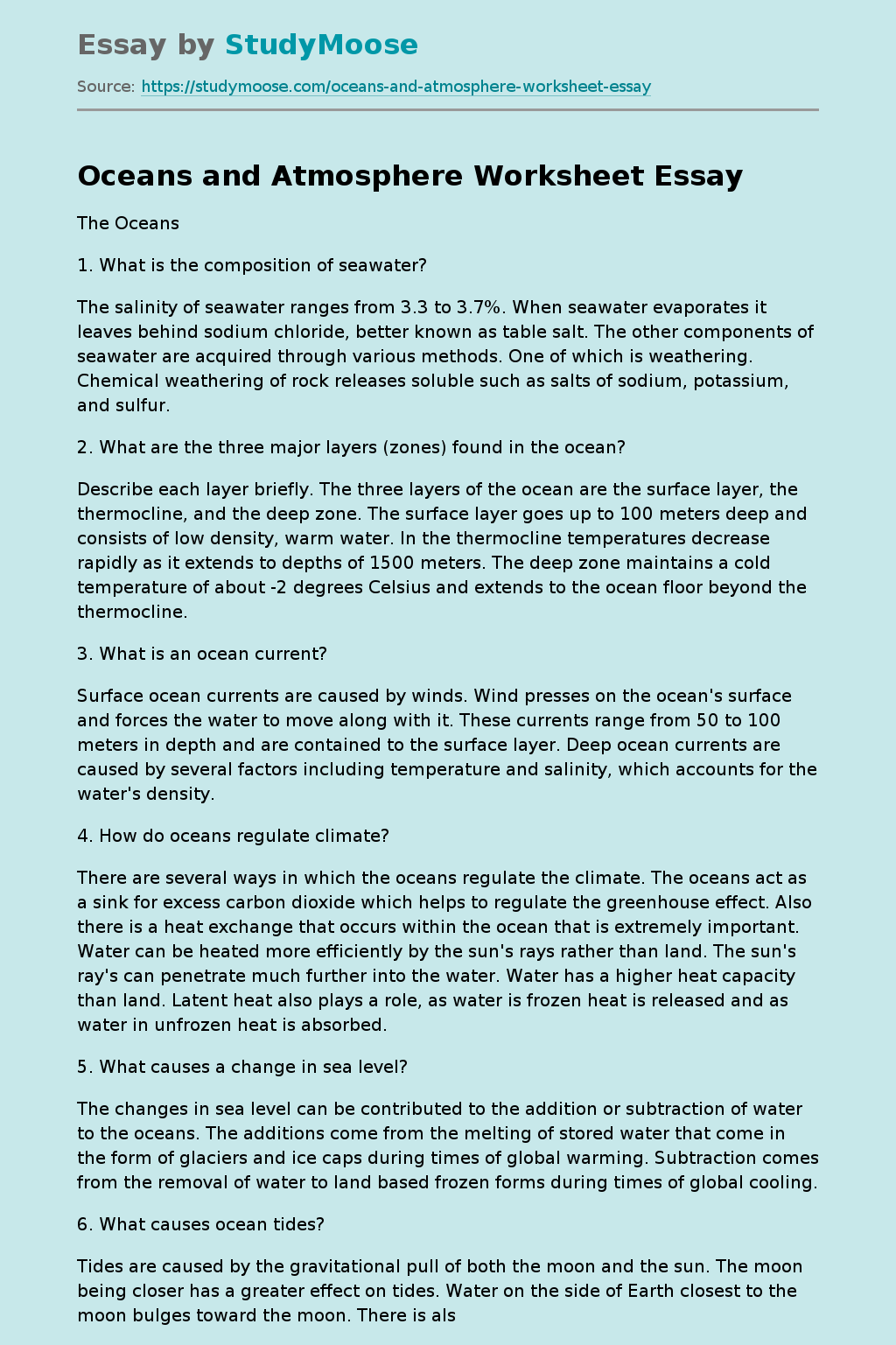