The relentless pursuit of human perfection has always been an intrinsic trait of human nature and science has been a mean to achieve it. This statement brings us to the main idea of Hawthorne’s short story “The Birth-mark.” It shows the story of a scientist who is obsessed with the removal of his wife’s birthmark, considering it a symbol of her human imperfection. “The Birth-mark” is possibly influenced by Hawthorne’s times where science began to gain knowledge about our world and was considerably glorified, through scientific experiment, humankind can discover, know, and do just about anything.

Don't use plagiarized sources. Get your custom essay on
“ Obsession of Perfection ”
Get custom paper
NEW! smart matching with writer

As the narrator explains, “In those days when the comparatively recent discovery of electricity and other kindred mysteries of Nature seemed to open paths into the region of miracle, […] in its depth and absorbing energy” (Hawthorne 209). The author’s story presents some critical issues about what it signifies to be human, how much science can tell us about the world, what happens when human beings attempt to subvert nature through science, and possibly more significantly, should we try to “play God” in this manner.

“The Birth-mark” like other stories by Nathaniel Hawthorne provides us with moral allegories and much of the meaning is through Hawthorne’s use of symbolism that addresses the themes such as manipulation of science, humanity’s flaws, and obsession with perfection.

Hawthorne uses an intriguing plot and unique characterization in order to teach lessons about the imperfectability of humans by examining at the misuse of science. Since Hawthorne is involved in the telling of a moral tale, it is appropriate to consider in this essay the ways “The Birth-mark” takes the moral to warn its readers about the dangers of science and obsession with perfection. Therefore, this essay will discuss the meaning of the more obvious lessons that Hawthorne’s short story “The Birth-mark” suggests, the imperfect nature of humankind, the limitations that science has, and the contentment that humans should have on what they already possess.

The main character Aylmer, “a man of science ̶ an eminent proficient in every branch of natural philosophy” (Hawthorne 209), suffers from a blind obsession about a tiny red birthmark resembling the shape of a hand that his gorgeous wife Georgiana has on her cheek. As Aylmer declares: “Ah, upon another face perhaps it might,” replied her husband; “but never on yours. No, dearest Georgiana, you came so nearly perfect from the hand of Nature, that this slightest possible defect ̶ which we hesitate whether to term a defect or a beauty ̶ shocks me, as being the visible mark of earthly imperfection” (Hawthorne 209). He seeks to remove his wife’s birthmark, the symbol of necessarily flawed humanity, and make her perfect.

Georgiana’s birthmark represents man’s imperfections, the very imperfections that make her human. The birthmark is deeply ingrained in her face. “It was the fatal flaw of humanity which Nature, in one shape or another, stamps ineffaceably on all her productions, either to imply that they are temporary and finite, or that their perfection must be wrought by toil and pain” (Hawthorne 211). We can assume that, symbolically, this passage implies that man’s imperfections are deeply embedded in his nature. “The Birthmark” illustrates the flaws of mankind, but its most significant declaration is that to be human is inevitably to be flawed. To struggle for perfection is to deny human’s own nature, to deny what makes us human, and to achieve such perfection is essentially impossible. It becomes clear when the narrator of the story describes Georgiana’s death “The fatal hand had grappled with the mystery of life, and was the bond by which an angelic spirit kept itself in union with a mortal frame.

As the last crimson tint of the birthmark–that sole token of human imperfection–faded from her cheek, the parting breath of the now perfect woman passed into the atmosphere, and her soul, lingering a moment near her husband, took its heavenward flight” (Hawthorne 222), by eliminating Georgiana’s imperfection, Aylmer also liberates her of her humanity. Once she is perfect, once she is no longer flawed, Georgiana can no longer live. Hawthorne’s message is that being imperfect is just part of being human. If you are not flawed, you are not human anymore. It seems then; that the central lesson and underlying moral message behind this passage is that trying to put a small mistake way up out of proportion, in attempt to create something perfect, only destroys a good thing and leave us with the fatal consequences that come with senseless obsession of pursuing perfection.

Another example of a moral lesson that Hawthorne’s short story “The Birth-mark” suggests is that science really does have its limitations. There are certain things that humans are not privileged to know or capable of doing. It is not only arrogant, the story seems to implies, but absolutely dangerous to try to play God. “Much as he had accomplished, she could not but observe that his most splendid successes were almost invariably failures […] His brightest diamonds were the merest pebbles, and felt to be so by himself, in comparison with the inestimable gems which lay hidden beyond his reach” (Hawthorne 217). Aylmer cannot discover everything about Nature; he has failed in his past experiments and he will fail again with Georgiana. One of the many morals of the story is that Nature carefully protects her secrets and cannot be overcome or even matched by man.

As we discuss in the introduction of this essay, Hawthorne wrote “The Birthmark” at a time when the scientific method was being glorified and people were starting to think science really could take us anywhere we wanted to go. “The Birthmark” is presenting Nature as the personified creator of all things, as a god. There are implications in the story about moral ethical issues as science tests new drugs in human beings for instance, or scientists playing to be god like in the case of human cloning. Finally, it delivers the moral about what happens when human beings attempt to challenge and alter nature that can and often will end in tragic consequences.

Aylmer’s gorgeous wife, Georgiana is highly desirable because of her beauty. The narrator describes her, declaring: “Georgiana’s lovers were wont to say that some fairy at her birth hour had laid her tiny hand upon the infant’s cheek, […] to give her such sway over all hearts” (Hawthorne 210). She is perfect in every way, except for one tiny flaw that Aylmer can’t accept. “At all the seasons which should have been their happiest, he invariably […] opened his eyes upon his wife’s face and recognized the symbol of imperfection” (Hawthorne 211). Aylmer is more and more bothered by his wife’s birthmark. He grows to find it utterly intolerable, and even describes it “as the symbol of his wife’s liability to sin, sorrow, decay, and death” (Hawthorne 211). The obsession with perfection blinds Aylmer to the true beauty and humanity of his wife, showing the struggle between accepting her true natural beauty and man’s inability to perceive it and appreciate what nature has bestowed upon him.

As the story revels through this important quote “Do not repent […] you have rejected the best the earth could offer” (Hawthorne 222). Hawthorne’s critical lesson is that Aylmer didn’t recognize how lucky he was to have Georgiana. At the end of the story Aylmer is punished for being dissatisfied with a woman who pledged her love and entrusted her life to him, a woman whose inner and outer beauty he could not see and his discontentment snatch away the most perfect thing in his life, Georgiana. Contentment on what we have is the central lesson of this passage when sometimes; it is enough to just finish a task, even if it is not perfect because striving to make it perfect could end up spoiling many things in the process.

At the end of “The Birthmark,” Aylmer both succeeds and fails. He succeeds in that he finally rid his wife of her birthmark. He fails in that…she is dead. Finally, this story involve man’s desire to prefect what is already perfect and the use of science as a flawed tool to attain this perfection. Sure, Georgiana dies right afterwards, but the fact remains that Aylmer does indeed succeed in removing the birthmark from Georgiana’s cheek. What does this say about man’s ability to conquer nature? “The end justifies the means.” You can use bad or immoral methods as long as you accomplish something “good” by using them. It is acceptable to do something bad in order to obtain something good? 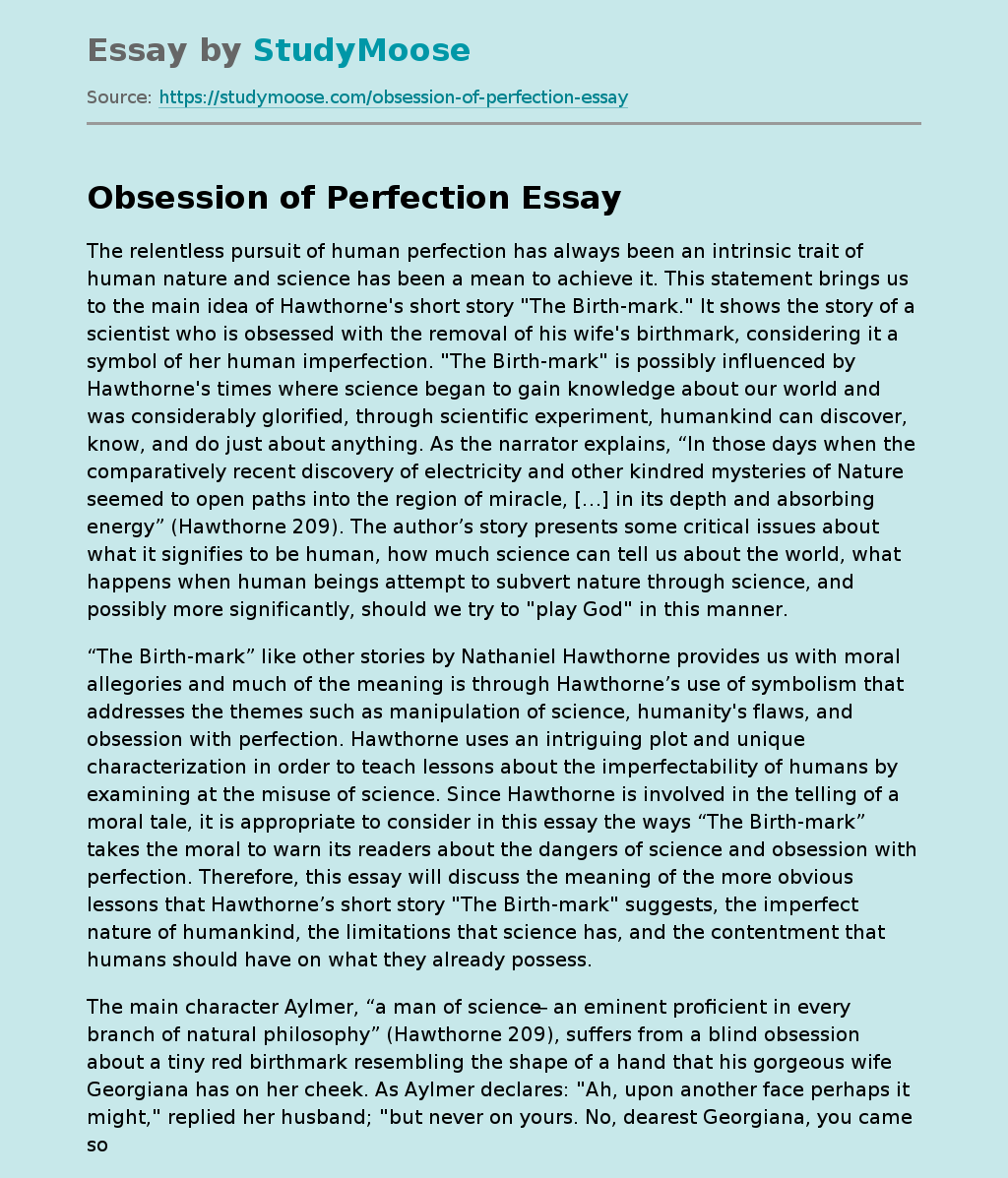