Obscene and Indecent Materials on TV

Obscene material, “is not protected by the First Amendment,” (361) to the Constitution and cannot be broadcast at any time. On the other hand, indecent material is protected by the First Amendment and cannot be banned entirely. It may, however, be restricted in order to avoid its broadcast during times of the day when there is a reasonable risk that children may be in the audience.

According to the U.S. Supreme Court, to be obscene, material must meet a three-prong test, “(1) an average person, applying contemporary community standards, must find that the material, as a whole, appeals to the prurient interest (i.

Don't use plagiarized sources. Get your custom essay on
“ Obscene and Indecent Materials on TV ”
Get custom paper
NEW! smart matching with writer

e., material having a tendency to excite lustful thoughts); (2) the material must depict or describe, in a patently offensive way, sexual conduct specifically defined by applicable law; and (3) the material, taken as a whole, must lack serious literary, artistic, political, or scientific value,”(362). Conversely, material is indecent if it portrays or explains sexual content or activities in terms, “patently offensive as measured by contemporary community standards , for the broadcast medium.

I worked in radio for three years and I think I have a pretty good grasp on what the difference of obscene and indecent material is. I worked on an afternoon show for the most part and I know that it is a violation of federal law to air obscene programming at any time. When I show got moved to nights, after the station format flipped, our show found a loop hole. In that, when we were in afternoons we knew that it was in violation of federal law to air indecent programming during certain hours (which were the hours we were in, 2pm-6pm), but after we moved to the 7pm to11pm slot, we knew that after 10 pm we were allowed to include some indecent programming that would appeal to our adult audience demographic.

An example of indecent materials on the airwaves could be something like, “Well, it was a nice big fart. I’m feeling very gaseous at this point.” And obscene material might be something along the lines as calling a girl a,” Cunt,” in a broadcast medium. Many women, including myself, would be very offended by that word but by talking about farting, not so many people would be as offended. From being in radio, I can remember an obvious instance in which we talked about a performance by Janet Jackson at the super bowl. Her breast popping out of her outfit could be deemed as “Patently” offensive, indecent material presented over the airwaves because many people were watching and it was on cable television. So I can clearly state that the main difference between the two, is that obscene material may never be used because it can be too offensive but indecent material can be used for content purposes under certain restriction hours or in a “safe harbor, ” (365), time slot.

The equal opportunities rule specifies that U.S radio and television broadcast stations must provide an equivalent opportunity to any opposing political candidates who might request it. The Equal opportunities rule is sometimes confused with the fairness doctrine because this doctrine, “never said that opposing views were entitled to equal time,” (366), as the Equal opportunities rule mandates. The Fairness Doctrine was a regulation of the State’s Federal Communications Commission which required broadcast licensees to present controversial issues of public importance, and to present such issues in an honest, equal and balanced manner. The, “equal {opportunities} rule {basically} require {d} equal air time for all major candidates competing for political office. It was preceded by the fairness doctrine, abolished in 1987, which required radio and television broadcasters to air contrasting views on controversial public issues”.

The fairness doctrine required stations to offer equal opportunity to all legally qualified political candidates for any office if they had allowed any person running in that office to use the station. However, this doctrine by no means stated that, if a station gives one free minute to a candidate on the prime time, it must do the same to another. What was just stated above is something which is along the lines of the equal opportunities rule, which primarily says that if a station offers ten minutes to a candidate, it must offer the exact same time to the other one.

The main difference between the fairness doctrine and the equal opportunities rule is simple. The fairness doctrine was applied to discussions on controversial topics and “was {only} enforced from 1949 through 1987” . The station was required under the fairness doctrine to provide equal time to differing viewpoints. The equal opportunities rule relates to free time given to political candidates. There are of course a few exceptions. But this rule is indeed still in place and implemented currently through, “Section 13 of the Communications Act,”(365).Both of these rules were federally required not state, though some states may have their own rules in place.

Obscene and Indecent Materials on TV. (2016, Jul 06). Retrieved from http://studymoose.com/obscene-and-indecent-materials-on-tv-essay 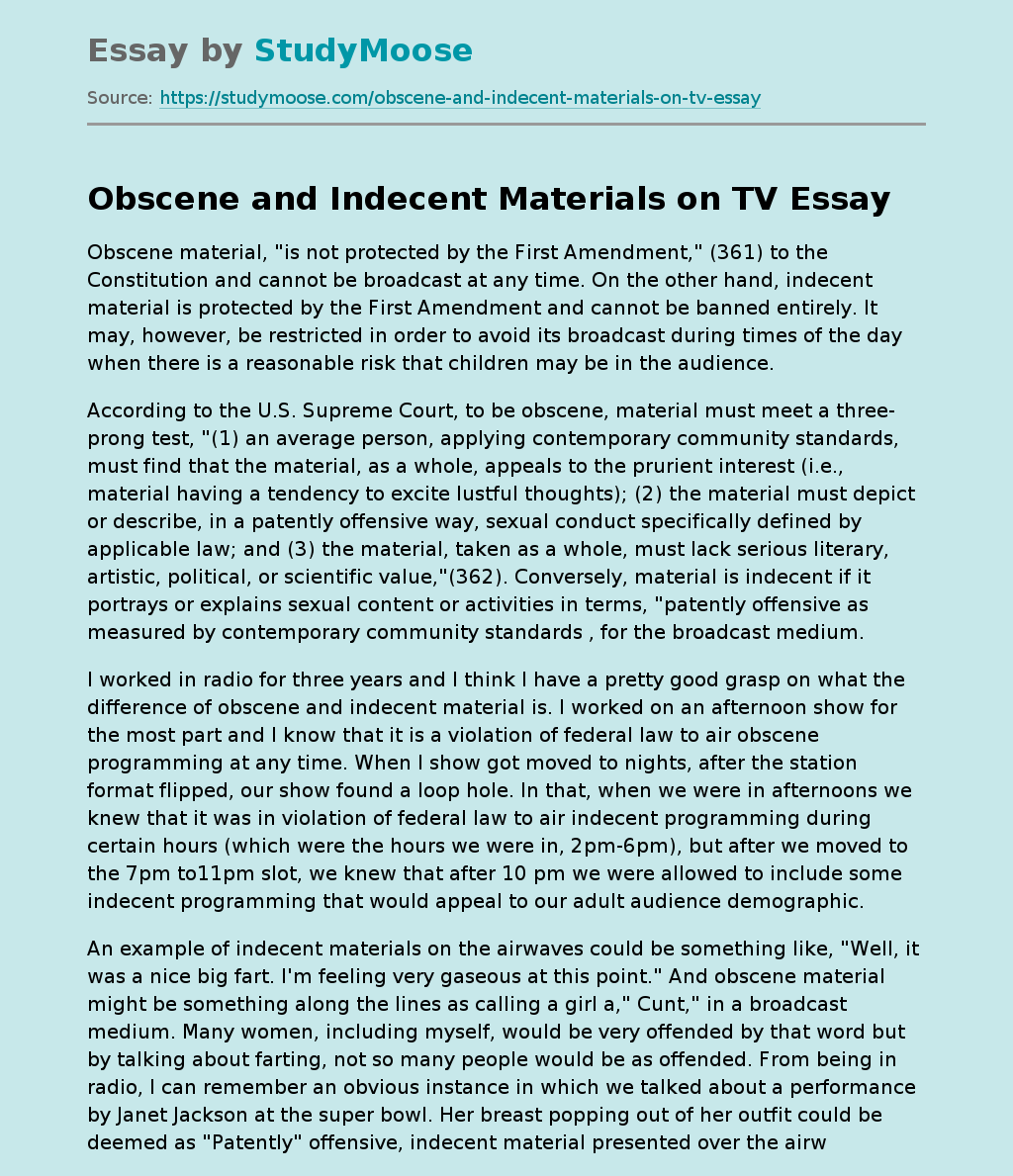