Kingfisher Airlines Limited is an airline group based in India Its head office is in Andheri (East), Mumbai and Registered Office in UB City, Bangalore. Kingfisher Airlines, through its parent company United Breweries Group, has a 50% stake in low-cost carrier Kingfisher Red. The airline has been facing financial issues for many years. Until December 2011, Kingfisher Airlines had the second largest share in India’s domestic air travel market. However due to a severe financial crisis faced by the airline at the beginning of 2012, it has the lowest market share since April 2012.

Vijay Mallya is looking at reports of Q3 of 2008 , thinking that can there beany way to at least break even in this critical time of economic slowdown. Aviation industry is very sensitive industry triggered hard by the recession across the world. Kingfisher reports Rs. 592.96 crore net loss (from exhibit-1) for the quarter ended 31st December 2008.

Sales stood at Rs 1,447 crore versus Rs 1,353 crore, in line with Jet Airways, which also posted a net loss of Rs 214 crore for the quarter under review because of poor load factors. The company claimed that technically, the financial results for the third quarter cannot be compared with the corresponding quarter because the Vijay Malaya-led Kingfisher was not listed last year and this year’s result include figures of erstwhile Air Deccan, which Kingfisher took over last year. “High fuel and other operating costs coupled with lower load factors contributed to the losses at Kingfisher,” an industry observer said.

On the operational front, Kingfisher saw corporate traffic being hit during the quarter because of the economic slowdown. Yields and front-end load factor also suffered “The full impact of the price reduction in aviation turbine fuel will lower the airlines’ operating costs,”

Kingfisher Airline is a private airline based in Bangalore, India. The airlines owned by Vijay Mallya of United Beverages Group. Kingfisher Airlines started its operations on May 9, 2005 with a fleet of 4 Airbus A320 aircrafts. The destinations covered by Kingfisher Airlines are Bangalore, Mumbai, Delhi, Goa, Chennai, Hyderabad, Ahmadabad, Cochin, Guwahati, Kolkata,Pune, Agartala, Dibrugarh, Mangalore and Jaipur.

In a short span of time Kingfisher Airline has carved a niche for itself. The airline offers several unique services to its customers. These include: personal valet at the airport to assist in baggage handling and boarding, exclusive lounges with private space, accompanied with refreshments and music at the airport, audio and video on-demand, with extra-wide personalized screens in the aircraft, sleeperette seats with extendable footrests, and three-course gourmet cuisine.

Kingfisher Airlines currently operates with a brand new fleet of 8 AirbusA320 aircraft, 3 Airbus A319-100 aircraft and 4 ATR-72 aircraft. It was thefirst airline in India to operate with all new aircrafts. Kingfisher Airlines isalso the first Indian airline to order the Airbus A380. It placed orders for 5 A380s, 5 A350-800 aircrafts and 5Airbus A330-200 aircrafts in a deal valued at over $3 billion on June 15,2005. With the sign of trouble in aviation industry, Kingfisher airlines and Jet airways (used to be competitors), formed alliance (October, 2008) to significantly rationalize and reduce costs and provide improved standards and a wider choice of air travels options to consumers with immediate effect.

Dec. 2007Low-cost carrier Deccan and Vijay Mallya-led Kingfisher Airlines decided to merge and create a single corporate entity to cut down operational costs and accelerate their journey to profitability. Shares of Deccan Aviation have doubled in a little over a month in anticipation of a reverse merger of Kingfisher Airlines into Deccan Aviation. Details of Deccan-Kingfisher merger, valuations and swap ratio will be worked out by accountancy firm KPMG. Mallya would be the chairman and CEO of the merged entity, while executive chairman of Deccan, Captain G R Gopinath would be the vice-chairman.

Following strategies were followed to make it one of the leading Airlines in India.

It planned to re-launch its commercial air service called UB Airway again which it had to withdraw it due to government restrictions. The Company gave best services to its customers that were like providing world class interiors, and in-flight entertainment systems. The company came up with only one class airlines rather than other airlines that had Business Class; Economy Class the idea was to combine Business Class experiences and Economy Class experiences in one. Having a single class freed up more leg space for passengers when compared to normal economy class flights.

The company started addressing its customers as “GUEST” rather than passengers. The company made its mark by providing its guests with more legroom and bigger seats so as to provide better comfort.KFA has set its sight to become India’s largest airline both is capacity and in market share. KFA’s Promotional Strategies & Marketing Strategies

It came up with a very appealing Promotional line “Fly the good times” and it reflected in the experience the company offered to its passengers.  KFA is also launched Kingfisher express In order to tap into the growing LCCsegment. Also launched the facility of web check-in, allowing travelers to print their boarding passes via www.flykingfisher.com and the introduction of the Roving Agent at the airport. The Roving Agent is like a check-in counter on the move. You no longer need to go to the check-in counter and wait for long. As part of its

the marketing team of KFA showcased the airline as “the new flying experience”. The following initiatives were taken as part of its promotional strategy…Advertisements hoardings at airports depicted the stylish interiors of the “Fun liners”, which conveyed youthful, fun-filled, and world class image.

KFA was the official travel airlines for the cast and crew of “Mangal Pandey”- the movie .

KFA launched many attractive offers to promote its sales like the “King Card” in association with ICICI Bank, in August 2005. This was meant to create loyal customers for KFA by providing benefits like privileged access to lounges, restaurants, free refreshments at airports, access to 180 golf clubs across India, special invites for lifestyle shows.

In October, KFA launched “Chill Times Offer “in the month of August 2005 and September 2005. In October they launched the “King Saver Offer “which said “Fly like a King, don’t play like one”. KFA targeted the frequent fliers business traveler segment, which was dominated by Jet Airways. By offering a “ King Saver Booklet”, this booklet contained six free flight tickets and was presented as a free gift if the passenger bought two such booklets each worth Rs. 26,999.Passengers could avail off this offer if they showed there Jet Privilege Member (Gold or Platinum) card.

KFA came up with many new financial strategic moves that made it one of the leaders of aviation industry the company had adopted following strategies:

To further its expansion plan KFA put in its bid to buy Sahara in November 2005.However negotiation came to a standstill when KFA felt the valuation of Sahara Airlines of around US$750mn to US$1 bn. was too high.KFA has plans to make an Initial Public Offer (IPO) and raise around US$200 mn that would be used for its fleet acquisition and route expansion activities.KFA set up Kingfisher International Inc. (KII), a subsidiary in US for its international operations. KFA plans to operate international routs by end of 2007. But KFA had yet to receive permission from the Indian government. According to Indian government domestic air carriers are not allowed to fly international routes without five year of domestic flying experience. But Mr. Mallya said if he failed to convince the government to change its rules, it would start an airline in a foreign country and fly it to India.

Prior to launch, KFA signed a “non-poaching alliance” with Air Deccan under which both the airlines agreed not to hire each other’s employee. KFA’s flight attendants called “Flying models” were selected through a national level model contest.KFA also stressed the fact that its employees had to be capable enough to meet the airlines’ high service standards.Mr. Mallya said “Kingfisher Airlines Limited has a first class management team not just at top most level but also in the second line. This is part of the UB group’s commitment to human resources”. 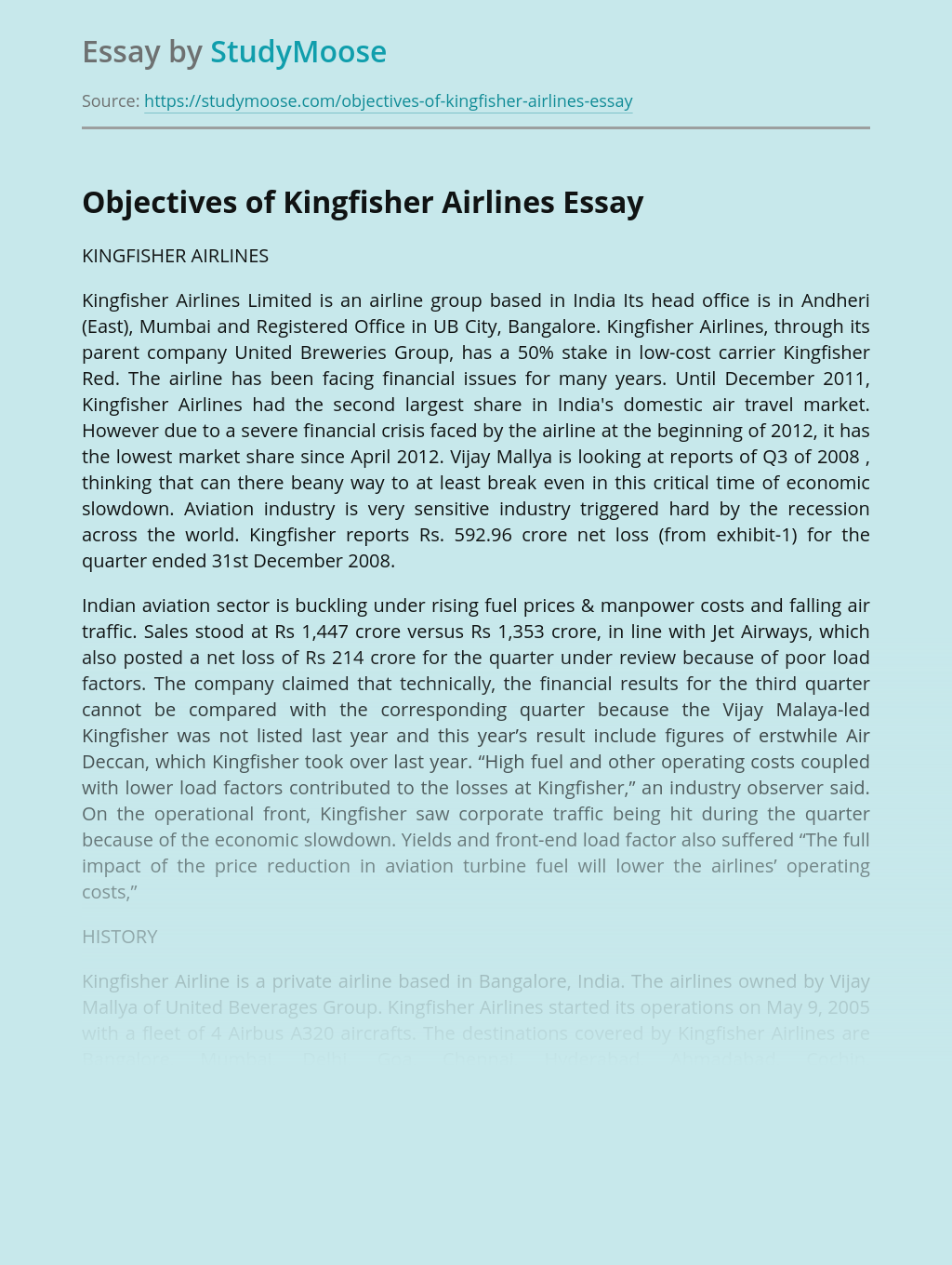