Nuclear Power as a form of clean energy

Energy from fission has provided the primal technique of generating a clean form of energy from very little source but it should be implemented in a healthy and secured way for the people and environment. In this paper we have discussed about Nuclear Power and how can it be used in generating clean energy. Atoms are the smallest particle in the universe and all the matter is composed of it. Atom consists of nucleus and when the nucleus of the atom is split into its components and fission takes place.

Nuclear energy, also called atomic energy, is the influential energy released by changes in the nucleus of atoms. The heat produced is used to generate electrical energy by producing steam. Uranium is used as the fuel of nuclear reactors instead of coal or oil. These reactors are especially built by them generate and manage nuclear energy. Fission of uranium inside the nuclear plant is its fuel and generates heat energy. To generate electricity through turbines this heat produced is used.

Nuclear power is very precarious and the waste issue should be logically handled.

During this process, radioactive materials are produced. And it’s not good to create an area where these waste are dump because severe problem might occur from this attempt in our country and cities. This lifts up many security issues and problem near the site . In particular: • Although this process is taken under a controlled and monitored environment, but still there is a high risk of nuclear accident, even though there might be a risk.

But the accident in the power plant could be real catastrophic.

• Presently a lot of radioactive and dangerous materials are stored on areas where there are plants and greenery which is not good for our environment. However, there is no way out to store safely the radioactive materials for a very long term. Nuclear power is renewable energy: Nuclear energy should be considered as a form of renewable energy. The best way to condense green house gases is to characterize to nuclear energy as the renewable energy said Eric Silagy, the chief development officer of Florida Power and Light to the Miami Herald.

It makes a lot of logic in integrating the nuclear energy said Silagy, according to the Herald. Nuclear emits zero green house energy; it is a base load supply system. Solar power is not only sporadic, it is blinking and irregular in nature as well that produces electricity 22-24 percent of the instance. There are sources of energy that are renewable and do not cause so many pollutants, however they only contribute a small amount to the energy pyramid. In the United States, Coal, gas, oil, and nuclear power are the most frequent forms of energy used. Three of these energies are limited: coal, gas, and oil.

Nuclear power is different from these as it requires fission process instead of combustion. This thing still does not really tell about the real importance of the nuclear energy as the renewable energy in the conventional sense of requirement. Natural uranium is augmented to 3-4 % to explosive uranium to make the reactor fuel. Once this percent of the fuel falls below that required percent of fuel to be considered ‘spent’ even then also of 95 % of the energy probable residues. The ‘spent’ fuel should be reprocessed or reused to unfasten o unlock the remaining energy.

After the reprocessing of the fuel it is then reused and the radiation emitted is also reduced. France is one of the top preprocessors after England; around 80% of its energy is from the nuclear energy reactors. US has stopped reprocessing the nuclear reactor energy due to some political issues where as the processing system is an important feature of Global Nuclear Partnership. Energy Resources: Energy has many importances in our daily life it is use to power and run the machines and vehicles to heat and cool the offices and homes and to provide other domestic services to us.

Almost 90% of the energy of the world is obtained from the fossil fuel and the rest is supplied by the nuclear energy. Nuclear Power: After the establishment of the atomic bomb in 1945 , many countries developed and promoted nuclear power stations that are able to generate huge amount of energy from very little amount of fuel. In the present world about 17 percent of the electricity is produced by the nuclear power energy. This advantage of the nuclear power station is that it takes a lot of time to build and is off very high cost too. These stations also generate wastes that are very dangerous and radioactive for a hundreds of years.

The problem of radiation still occurs after its disposal. There are almost 442 nuclear reactors in operation presently around the world. It is suggested to build 2,000 large reactors that generate 1,000-megawatt energy to replace fossil fuels on a large scale. Renewable Energy Sources: Modern renewable sources of energy include solar power, geothermal energy, tidal power and wind power. The relative significance of these sources of energy is its high cost. On the other hand petroleum become inadequate, this situation will completely change.

Solar energy is used to power space stations, watches, calculators and PV cells. Many multi national companies are promoting the use of solar energy and in some other case they are planting virgin forest to use the wood from them as a source of heat energy. Nuclear Power as safest form of energy: What is the reason behind this that the democrats are always against the nuclear power? They are continuously after energy independence. They have objections for wind power, solar power etc, they are all complementary forms of energy. They can never be the primary sources as they are very irregular in nature.

Nuclear energy is incredibly safe form of energy and it does not contribute to global warming. Critics have believed that the nuclear energy is a dilapidated energy source. Arguably the decrement in the proportion of nuclear energy in power production is having a risk that it can be abridged or not through the new technology. They also have objections for the unsolved problem of storing radioactive waste. Nuclear energy is one of the resources which can effectively be used to replace oil and gas reserves if they are fully developed and can be used to generate measures to produce electricity in cheap and economical manner.

Researcher claims that nuclear energy can overweight cost and problems that occur during its production cycle. The liberal Argument: It is not just about nuclear power, it is far risky as well as nuclear waste last for hundreds of years and there is no way to get rid of billions of tons that is produced. Nuclear power generation brings with it centuries of radioactive waste. Storage of Nuclear waste is also largely an issue of the past with technology now available to store nuclear waste in solid form, reducing virtually to zero the possibility of leakage, ground water contamination and so forth.

20%of the electricity in US is from nuclear plant that uses low-enriched uranium fuel and emits carbon dioxide. It had caused no death to the public since 50 years. Nuclear power is one and the only large scale energy that can produce clean electricity. However wind and solar power also produces it but is very intermittent and they always need a back up as well usually from fossil fuel that have impact on public health. Nuclear power is cleaner, safer and more environment friendly and can also produce electricity on large scale. The following are the features of nuclear energy:

• 73% of the America’s electricity is provided by nuclear power. It emits no harmful gasses. It uses very small amount of fuel and generates huge amount of energy. • Uranium is a form of energy that is highly dense than any other fuel. For instance suppose you have electricity of lifetime of your own generated from nuclear power, the waste from it would be very little that it can even get into soda can. On the other hand if you have done that from coal than 146 tons of waste out of which 69 tons of solid waste and 77 ton of carbon dioxide that would speed up global warming.

• More amount of radiation is emitted from banana than a person living in 50 miles of nuclear plant. • Nuclear fuel should always be fortified and secluded from the public. • The carbon dioxide emitted from the nuclear reactor is the same while producing electricity are the same as wind power. Nuclear plant is an alternative to fossil fuel plants. Nuclear energy is gift of nature. It can easily be exploited cleanly and safely but an accident in the past regarding the nuclear energy has got us to the path of risk, danger and unusual complication. The Chernobyl disaster is an example of how unsafe nuclear power is to humans.

The awful explosion of the power plant in Ukraine was followed by radioactive contamination of the surrounding area. It was on of the most horrible accident in the history of nuclear power. For the production of plutonium bomb nuclear reactors are designed especially for this purpose. In 1950’s plutonium plants are considered as windfall and presently it has concerted into an out-of-control nightmare. It is accumulated that 22000 nuclear bombs are all around the world and we need more plants that non-conformist more and more ton of nuclear waste.

Uranium and thorium are those radioactive elements that are distributed in the rocks of the earth. The radioactive decay produces a lot of heat that heat up the core of the earth to 6000 degree Celsius which is equal to the temperature of the sun and it comes out in the form of molten rocks from volcanoes. In fact 99. 9 percent of the earth surface is so hot that it can boil water. Now this process of boiling water is all about the nuclear power. The reason behind getting into trouble digging up and crushing rocks and refining it to get uranium is simply to boil the water to compel the steam turbines.

However the geothermal power is using the hot rocks of the earth directly to boil the water. The US has spent 70 billion dollars to make the nuclear reactor based power safe, but they were unable to find the solutions yet. Conclusion: For the process of nuclear energy generation it is indeed required that the process is scientifically very sound especially when the process is undertaken inside a laboratory. It can often produce those conditions that are usually out of our control.

To make correct, responsible decisions that take into account not only our own welfare but also that of our children and their children, we need to adopt wide scale renewable energy in the form of Solar and Wind power. These are the technologies that are proven to be the capacity to meet our needs and requirements to overcome and suppress the adverse effects, assuming they are executed in an intelligent way. It is now the duty of the governments of all around the world to think over this crucial aspect of energy resources and start making moves that assure the coming generations a safe, energy rich and pollution free world.

Nuclear Power as a form of clean energy. (2016, Nov 17). Retrieved from http://studymoose.com/nuclear-power-as-a-form-of-clean-energy-essay 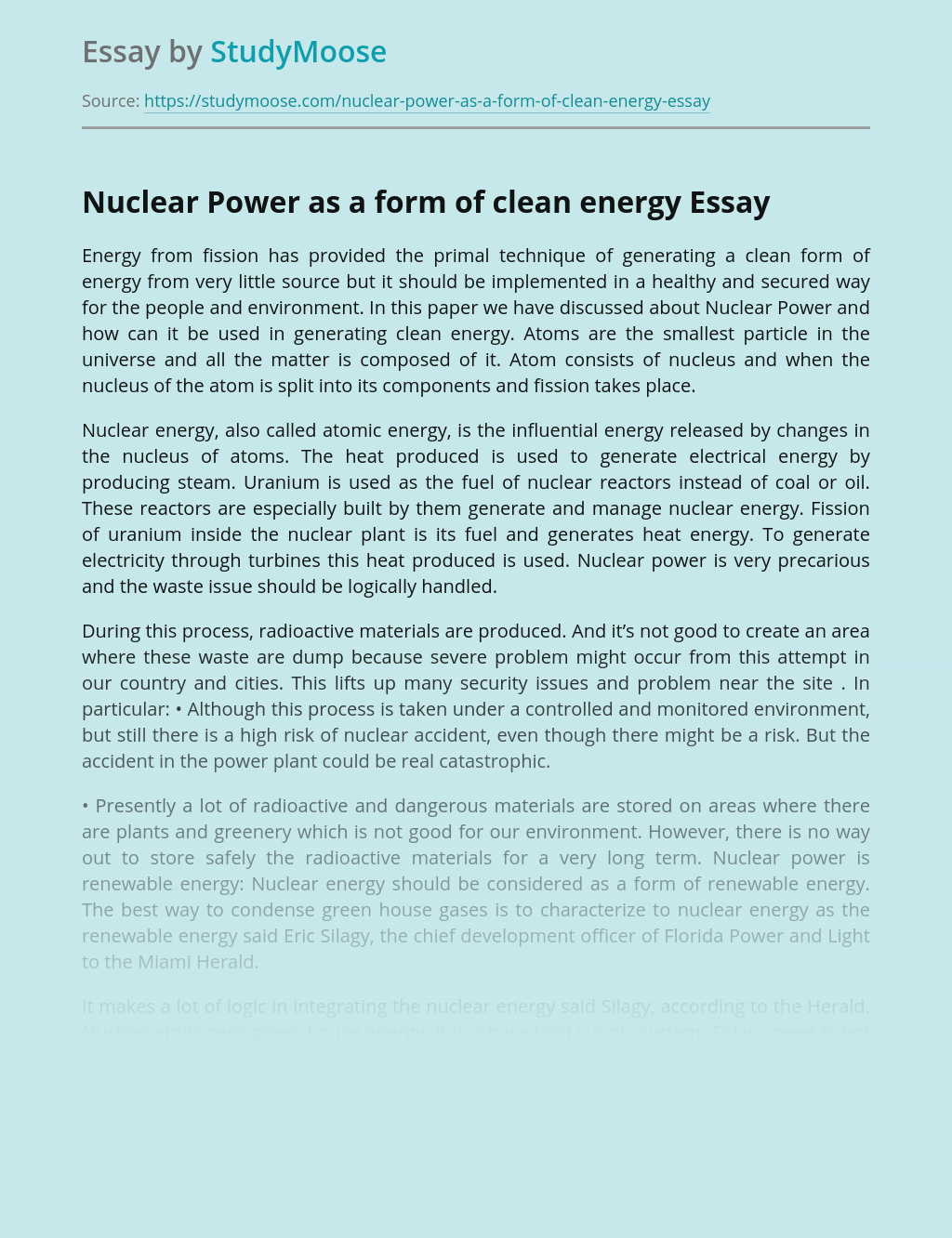 Don’t waste time
Get a verified expert to help you with Nuclear Power as a form of clean energy
Hire verified expert
$35.80 for a 2-page paper
Stay Safe, Stay Original