Dehumanization played a crucial role in Beloved, slavery and the civil war by demoralizing, degrading and insulting African Americans. In Beloved, the slaves were dehumanized throughout the story. There were many instances where a slave was demoralized, degraded or abused. There were many instances where one would “get the bit”. In chapter seven, Paul D explains how he had the bit in his mouth. “I couldn’t… I had a bit in my mouth” (Morrison 69). This is an example of a slave being physically abused.

Don't use plagiarized sources. Get your custom essay on
“ Novel Beloved About Civil War, Slavery and Dehumanization ”
Get custom paper
NEW! smart matching with writer

Paul D said this statement when Sethe confronted him about the rape. He was saying how he couldn’t speak up because he had the bit in his mouth. It prevented him from talking. He had no way of communicating. In the first amendment of the Constitution, the authors state that all men have the right to freedom of speech. By having a bit in one’s mouth, preventing them from speaking, it therefore denies the right of the first amendment.

It is one of society’s God-given rights to be able to speak, when Paul D has the bit in his mouth, he is essentially reduced to something less than human. He has been turned into an object. He cannot speak, he cannot be free, he is someone’s property; he is an object.

Humans were not created to be owned and operated like a machine. In this case, Paul D is, and therefore, is dehumanized. Bestiality was a major depiction of dehumanization in this book.

The book graphically explains how men had sex with calves. This was a last resort. The men were not allowed to have sexual intercourse with the women unless they were reproducing, therefore as a result of desperation, they resorted to animals. While the men did have their own choice to have sex with the animals, Morrison is showing how sex for pleasure is natural instinct for humans, and because their owners did not allow them to have sexual relations with the women, the men resorted to animals. This is a dehumanizing act because it is morally degrading. The slaves are being forced to make an unfair decision. They must choose between bestiality or no sex at all. Bestiality is demoralizing and abstinence is nearly impossible, but the fact that the masters force a decision such as this upon these men is dehumanizing.

When a person is born they are given a first name by the choice of their parents, and a last name that they acquire from their father. If a child is born into slavery sometimes the mother is allowed to name it, but the baby will take the last name of its master. In Paul D’s case, he was named ‘Paul’, but was given the last name of ‘Garner’, the name of his owner. The ‘D’ is used to distinguish him from the other Pauls in the story. It is dehumanizing to essentially destroy one’s ancestry by taking away their last name. This eliminates the possibility of Paul D passing on his name to future generations, thus ending his family name.

Baby Suggs was forced to make a very difficult decision in this book. She had to decide whether or not to let her baby live and suffer through slavery, or to murder it and put it out of it’s misery-to-come. Clearly, it is dehumanizing to be forced to have to make a choice such as this one. A mother should not have to murder her own baby; she was doing what she believed was best. She believed that death was more pleasant than having to endure the hardships of slavery. Baby Suggs had to murder her own baby, a child who hadn’t live more than a few days, in order to save it from the terrors of slavery. This is a choice that was forced upon her by slavery that was inhumane; a mother should never have to make such a decision.

Dehumanization was also displayed during slavery. In order to transport slaves over the Atlantic to America, the white men needed a fast, practical means of transportation in order to move the slaves, their merchandise, from one continent to another. The best way to do this, they decided, was to use cargo ships. According to the power point presentation in class, the slaves were crammed into the bottom of these ships like sardines. A ‘light-load’ would be when the slaves are all lying on their backs with one stacked on top of the other. When the slave owners were in a rush and needed a lot of ‘merchandise’, the slaves would be packed on their sides. They were unable to move except for the hour that they were allowed outside on the deck. In many instances, one third of the slaves being transported would die on the way to America.

The lucky ones who survived the trip were forced to endure years of hatred and oppression. This is a prime example of dehumanization. Humans are forced to withstand a three-month trip in minimal conditions just so they can be bought and sold like animals for work. People are not meant to be treated like cattle. It is abusive, demoralizing and degrading to be treated like this. What’s worse is that when the slaves arrived in America, they were thrown into prisons and auctioned off like objects. They would literally stand on a podium and have white men brush past them and feel them and check them out. The black people had to first endure a grueling trip across the ocean, and then they had to be auctioned off like workhorses. It was very dehumanizing because the slaves were forced to work. They had no rights, therefore they were not free.

Dehumanization was shown during the civil war as well. As a country, we were reduced to nothing because we were fighting amongst ourselves over such a very immoral, dehumanizing topic of slavery. We nearly lost half of our land to people who believed in using black people as objects and making them work. Thanks to Abraham Lincoln and the Emancipation Proclamation, slavery was abolished, and the War Between the States was over. The damage had been done, however. Brothers were forced to fight against brothers, and friends against friends. So much blood was shed for such a despicable cause. It is a clear example of dehumanization when a country is on the verge of downfall and the citizens are at war over a topic such as slavery. 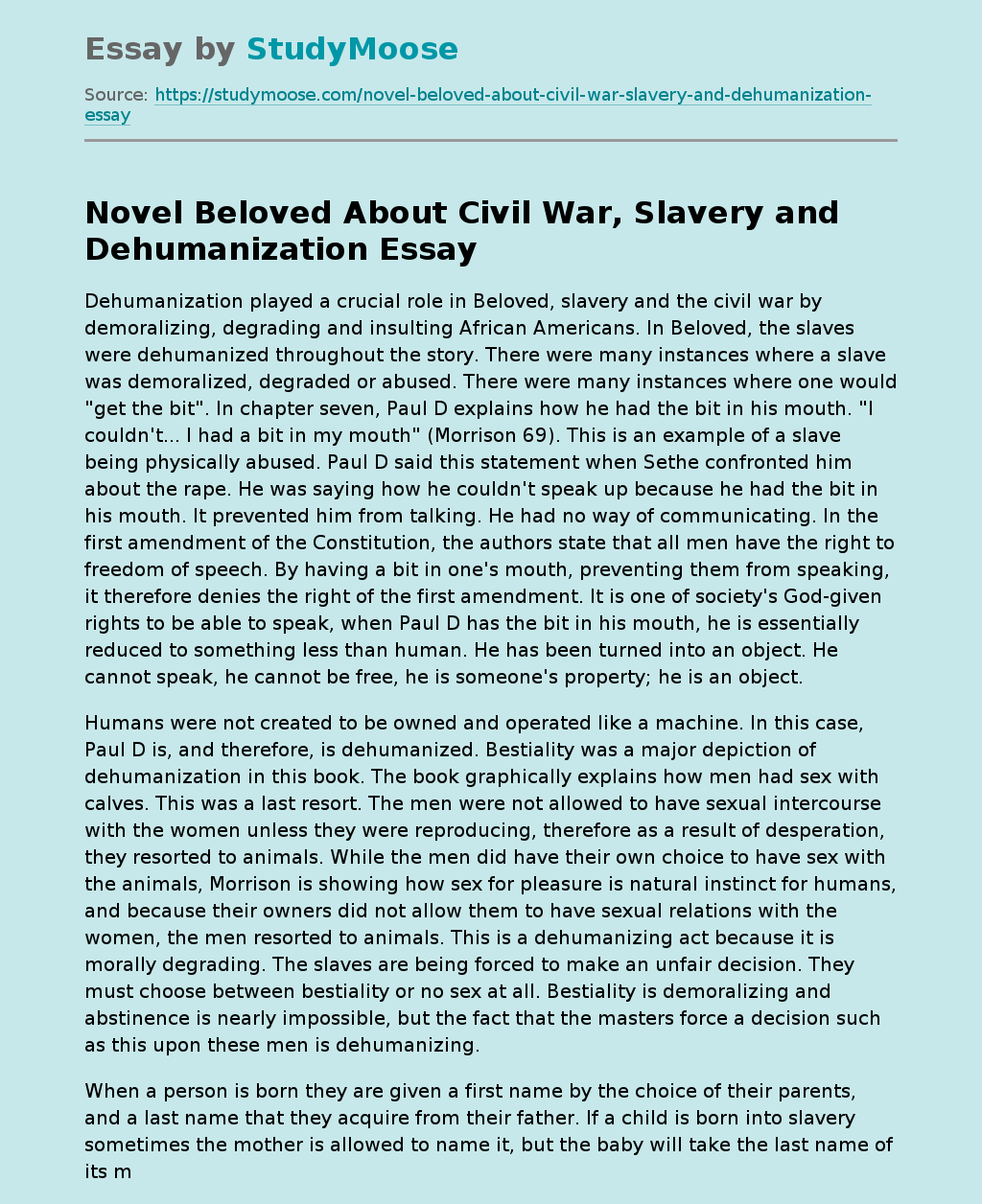