“Nothing Gold Can Stay” in The Outsiders

In The Outsiders, the theme “Nothing Gold Can Stay” mentioned in the Robert Frost poem, plays a large role in the life of Ponyboy as he grows from being a naïve boy, who’s smart but doesn’t use his head a lot, to a more grown up, tougher boy who still has all the kind and caring qualities from when he was younger. In the poem “Nothing Gold Can Stay”, Frost talks about the first buds of spring, which are gold, young, and innocent, but last only a few days.

Don't use plagiarized sources. Get your custom essay on
“ “Nothing Gold Can Stay” in The Outsiders ”
Get custom paper
NEW! smart matching with writer

Nothing young or innocent can last for long. In the beginning of the novel, Ponyboy gets jumped by the Socs while walking home from the movies, because he wasn’t thinking. He knew that he wasn’t supposed to walk alone. “Greasers can’t walk alone too much, or they’ll get jumped, or someone will come by and scream ‘Greaser!’ at them, which doesn’t make you feel too hot, if you know what I mean.

Proficient in: Nothing Gold Can Stay

” When Ponyboy gets jumped he screams for his brothers, or anyone nearby.

He freezes and becomes speechless and overcome with fear like he does several times through the novel – when Johnny kills the Soc, and at Johnny’s death- Walking home alone instead of calling a friend or his brother Darry was something naïve and reckless. This is an example of how Ponyboy is at the beginning of the novel: naïve, innocent, and afraid, but also kind and thoughtful. When Ponyboy, Johnny, and Dally come back from Dairy Queen to the church they were hiding in, they find it in flames.

Despite Dally’s warnings, they, Ponyboy and Johnny run into the burning building to help the children trapped inside. They were trying to be heroes because they felt guilty about leaving the cigarettes in the church, which was the cause of the fire. After the kids were rescued, Johnny was severely burned, later to die and Ponyboy was hurt too. This was because the boys just jumped right in without thinking, even though it was also a good thing, because if they hadn’t the kids could have been hurt, or even killed.

This is one of the times Ponyboy acts brave instead of being speechless, and overcome with fear. “‘I swear, you three are the bravest kids I’ve seen in a long time. First you and the black-haired kid climbing in that window, and then the tough-looking kid going back in to save him.’” This is said to Ponyboy as a compliment. This example shows how Ponyboy is still gold, because he ran into the burning house to save the kids, a reckless, but brave thing to do. Near the end of the novel, Ponyboy is challenged by some Socs about killing Bob. He is quick to crack the soda bottle he was drinking and hold it out as a weapon. “Big deal. I busted the end of my bottle and held the neck and tossed away my cigarette. ‘You get back into your car or you’ll get split.’”

This shows how Ponyboy has toughened up because of the recent events, Johnny killing the Soc, Johnny dying, and Dally dying. Johnny’s death affected him the most in my opinion, because when Johnny dies, his last words of encouragement affect Ponyboy a lot and he promises to become a better person. All of these events force Ponyboy to grow up, and become tougher. Later however, Ponyboy proves that he still has the same characteristics he had before. Even though he was forced to toughen up and grow up, he his still kind, thoughtful, and caring just like he always was. “‘What in the world are you doing?’

Two- Bit’s voice broke into my thoughts. I looked up at him. ‘Picking up the glass.’… I didn’t want anyone to get a flat tire.” This shows how even though he became tougher, Ponyboy didn’t become like Dally, completely hardened. “Nothing Gold Can Stay” is an overlying theme for Ponyboy, as he grows from a naïve boy to a tougher, more mature boy who still is kind and thoughtful. Ponyboy is a better person at the end, and is no longer afraid and feels bad about being a greaser. Ponyboy is now a better person, who looks into the future with optimism and tries to rise above poverty and gang life.

“Nothing Gold Can Stay” in The Outsiders. (2021, May 06). Retrieved from https://studymoose.com/nothing-gold-can-stay-in-the-outsiders-essay 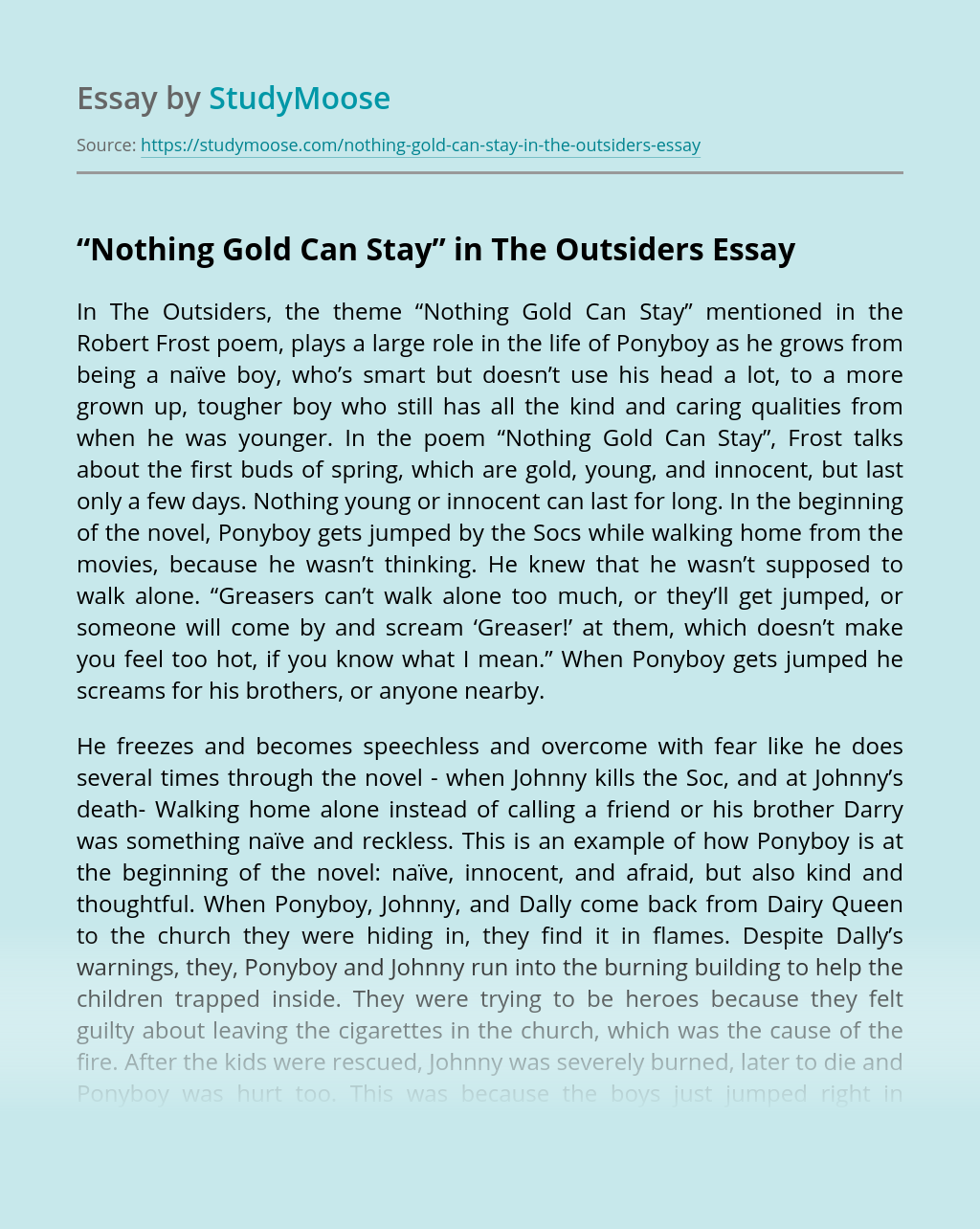