Nothing Gets Between Me and My Calvins

Don't use plagiarized sources. Get your custom essay on
“ Nothing Gets Between Me and My Calvins ”
Get custom paper
NEW! smart matching with writer

While “sex sells” is an oft remarked upon phenomenon in the advertising industry, the Brooke Shields advertisement was not the normal fare at the time. Ms. Shields is obviously an attractive woman in the advertisement, though she is dressed like an average young girl and not a super model. Instead of giving the viewer the expected overly sexualized adult woman Calvin Klein infuses controversy with suggestive language and themes into every frame.

Brooke Shields represents a very young girl, a girl in every day clothing who could be any girl, whistling a forlorn song in a rather brazen pose. When she utters those scandalous lines, she raises her eyes and meets the viewer’s gaze as if challenging them. It is a very startling and unforgettable imagine, so controversial in it’s portrayal of a suggestively bold minor that it was banned from most major networks. Yet when we examine the clip there is nothing overtly sexual about it. In our modern day and age the advertisement would come off almost as innocent.

The Brooke Shields advertising campaign, with it’s commercial and subsequent magazine and billboard spots propelled the Calvin Klein brand to sell over two million pairs of jeans monthly and allowed it to expand into shirts, skirts, jackets and later underwear. His success with the campaign would set the tone for the rest of his advertisements and raise

Nothing Gets Between Me and My Calvins

Page Two much more controversy with his hedonistic and often blatantly sexual use of minors within the campaigns. However, he set the challenge for the fashion industry: if you want sales, merely sex alone is no longer enough, but controversy, desire, and passion is necessary to win the masses and make a memorable campaign.

Nothing Gets Between Me and My Calvins. (2016, Sep 29). Retrieved from https://studymoose.com/nothing-gets-between-me-and-my-calvins-essay 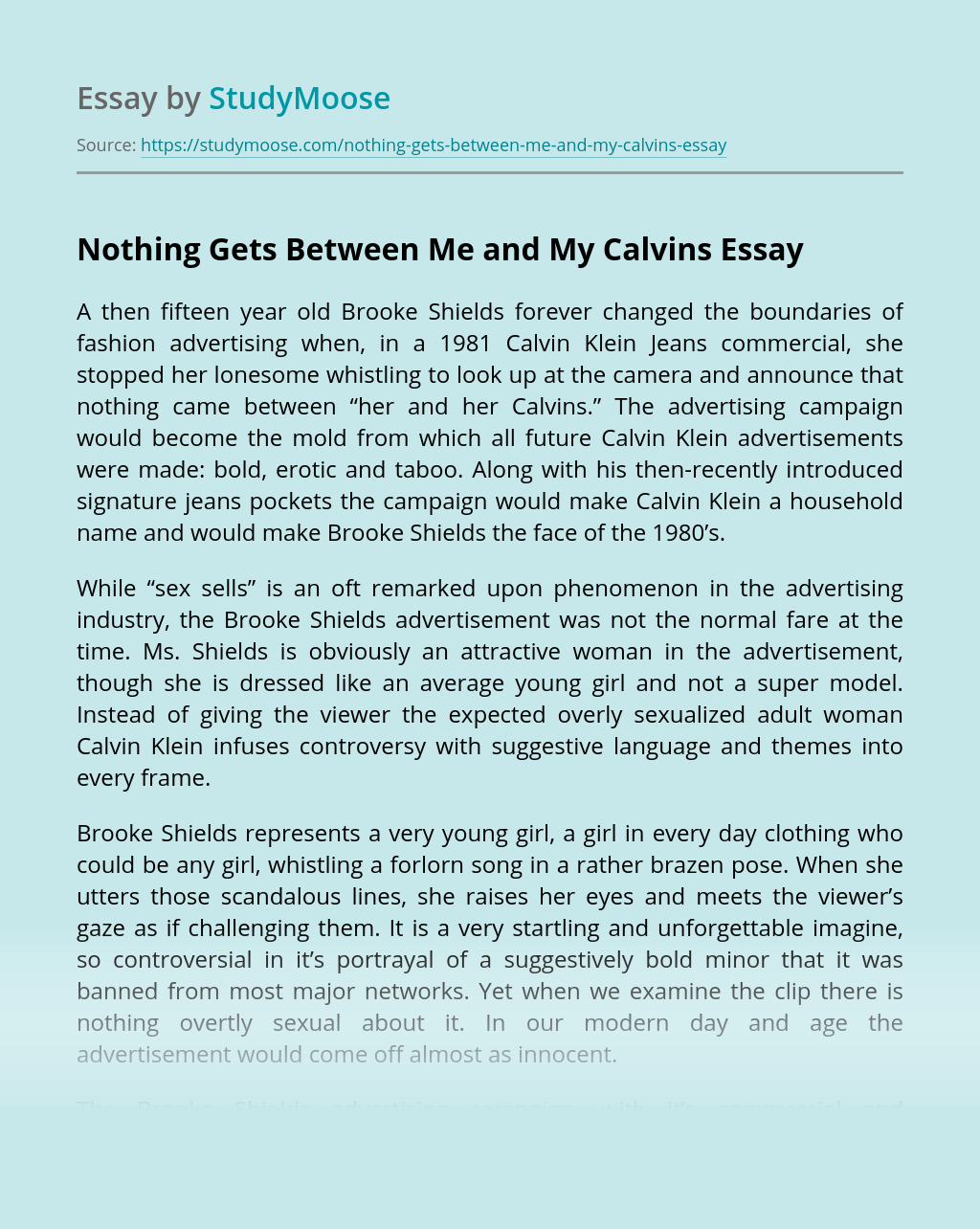