Nothing But the Truth

Philip Malloy is a track-obsessed ninth grader at Harrison High School in Harrison, New Hampshire. He has an English teacher, Margaret Narwin, and is doing very poorly in her class; he is given a D for his grade and is not allowed to try out for the track team. He does not tell this to his parents, and instead pretends that he no longer has an interest in trying out for the track team. Philip causes many distractions in Narwin’s class such as humming the national anthem.

Don't use plagiarized sources. Get your custom essay on
“ Nothing But the Truth ”
Get custom paper
NEW! smart matching with writer

Eventually he is suspended from school by Dr. Joseph Palleni, the school’s vice principal. Phillip then tells his parents that he was suspended for singing the National Anthem. Mr. Malloy (Phillip’s father) goes to tell Ted Griffin, who’s running for the school board. He then gives Phillip an interview with Ms. Jennifer Stewart, a reporter who was interviewing Mr. Griffin, Philip Malloy’s neighbor, was interested in Philip’s story about suspension and talks to the school superintendent, Dr.

Albert Seymour (who was unaware of any policy against singing the national anthem but is not aware of the context), the principal Dr. Gertrude Doane (who received a short memo on the subject), the assistant principal, Dr. Joseph Palleni (who is defensive about his level of involvement), and Miss Narwin (who verifies the facts of the story without providing additional detail or commentary).

The story runs in a local paper, and is used as a campaign issue by Mr. Griffin about how a student was suspended for being “patriotic.

” The story is then picked up by a national newswire as well as a radio station and the school is flooded with telegrams in support of Phillip and against Miss Narwin. The school tries to respond, going through sequential levels of bureaucracy until its statement has become half-truth, putting the blame fully on Miss Narwin. By the end of this novel, Philip is transferred to Mr. Lunser’s homeroom, but doesn’t get the support he expects; instead many students hate him.

Eeven his own friends abandon him, and if things weren’t bad enough for him, several former classmates are trying to get a petition signed to prove Miss Narwin was not at fault. Philip later finds out that the idea was started by the track coach making Philip become an outcast to the point of skipping school which causes a concern for his parents. So his mother decides to transfers him to a private school despite her husband protesting against the idea since it would take up all his son’s money for college.

Things are at there breaking point for the school with elections coming up and the fear that the school could face budget cuts, they ask Miss Narwin to “take a break from teaching” so she agrees, but then chooses to resign and visit her sister in Florida. At Phillips his new school, he is asked to sing along to “The Star-Spangled Banner”. At that moment he starts to cry, and says “I don’t know the words”.

The theme of distortion of the truth and people’s willingness to disregard the truth to protect themselves is not only accomplished through the storyline, but also through Avi’s unique style. Nothing but the Truth, which is a documentary novel, pulls together many different nonnarrative elements, such as memos, conversations, letters, diary,and phone conversations. Although these pieces are said to contain “facts,” it is apparent to the reader throughout the novel that there is much discrepancy between these sources. Since these sources contain flaws, the real “truth” is not revealed by the end of the book. References

Nothing But the Truth. (2016, Jul 04). Retrieved from https://studymoose.com/nothing-but-the-truth-essay 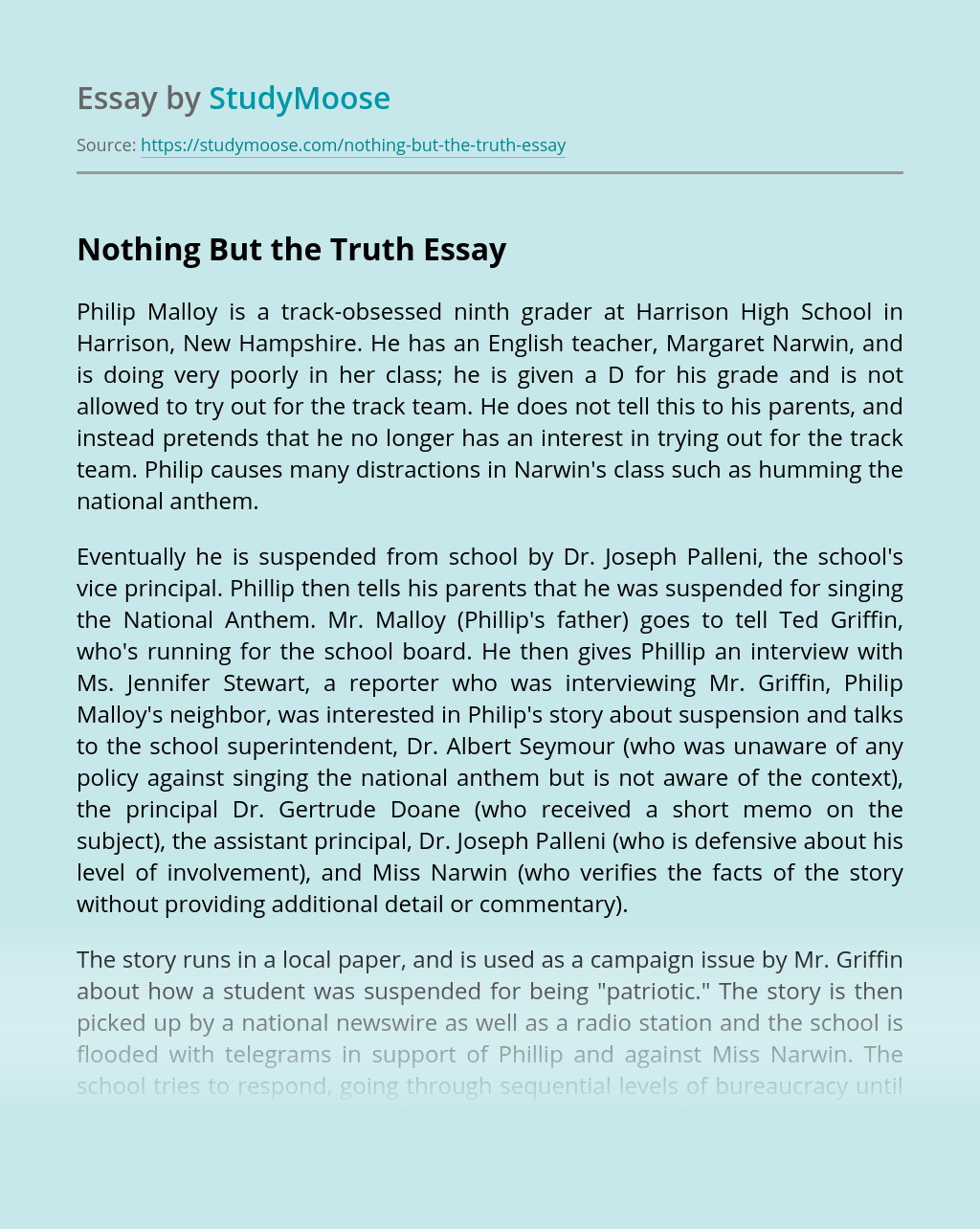