Notes on Geoffrey Chaucer's life and the Pardoner's tale

Chaucer lived in the 14th century. He wrote poetry for society’s most rich and powerful people. When he wrote the Canterbury Tales he encapsulated the entire spectrum of modern life up to 1400. From the records that were found it is thought that Chaucer was born around 1344.

In 1359, at the beginning of the Hundred Years’ War, the French took Chaucer prisoner. He was released after the King paid ï¿½16 for his discharge (this proves him to be of great importance to society).

Don't use plagiarized sources. Get your custom essay on
“ Notes on Geoffrey Chaucer’s life and the Pardoner’s tale ”
Get custom paper
NEW! smart matching with writer

It is thought that he may have returned to study law at the Inner Temple, as a wide knowledge of this subject is shown in his later work. However, by the time Chaucer was in his twenties he held the position of a Squire at the Royal Court, which was a middle ranking position. French was spoken a large amount of the time at court and Chaucer would have believed it to be the language of gallantry and enlightened society.

Chaucer was, once again, in France in 1370. It is therefore obvious that French was a substantial inspiration in his work.

The king asked Chaucer to visit Italy, Genoa and Florence (in 1372 and 1378). This was a very influential time for Chaucer, in the context of his poetry, as he was exposed to some of Italy’s greatest literary works. He was greatly inspired by Boccaccio (1313-75) and Petrach (1304-74), who he is thought possibly to have met. He also read works by Dante (1265-1321) who had died fifty years previously.

Chaucer was appointed a Controller of Customs in the Port of London a year later.

He was later made Justice of the Peace and sat in Parliament as Knight of the Shire for Kent.

In 1386, Chaucer was devastated when he lost his official positions and his home when Richard II purged his Court. His wife died the very next year in 1387. At this point he decided to return to poetry, and he started to put together the Canterbury Tales.

Chaucer was back in Richard II’s high esteem when he gave Chaucer the prestigious position of Clerk of the Kings Works, which entailed many duties. He eventually retired at 50, after being beaten up twice and being poorly paid by the King. Chaucer died on 25th October 1400 in a house in the garden of Westminster Abbey. He is buried in “Poets Corner” in the Abbey.

“The Church” was the Roman Catholic Church headed by the Pope in Rome. At this time there was a significant difference between a layman and the cleric. All clerics were seen as higher in society, however, within this group there were different classes. The clergy shared important traditions including the right to be tried in an ecclesiastical court. Part of the ecclesiastical justice system was the Summoner, whose job it was to summon people to appear in church courts. Things were changing in Chaucer’s time.

Up until the 13th century all educated men belonged to the clerical classes. Later, laymen, like Chaucer, could occupy positions of importance as well. Evidence of this change can be seen throughout the Canterbury Tales. However, the period was still one of God-fearing people and the possibility of eternal damnation was very real.

Literary skills were on the increase in Chaucer’s time. Schools such as Winchester and colleges like New College were being established. Practically all schools were under church control, so French and Latin were the most important languages. Universities were also on the increase at the time and there were three main schools that had libraries of hand-written books. Chaucer was well read in the classics.

It is thought he may have been a student at St Paul’s grammar school where he would have embarked upon the study of literature. He learnt the art of Trivium, which consisted of Grammar, Rhetoric and Geometry.

In Chaucer’s period students were beginning to translate Latin into English rather than French. This would account for his specific style of poetry.

At one time scholars divided Chaucer’s literary works into three periods of influence. These are:

1. The French Period – the tradition in which he was schooled.

2. The Italian Period – this followed his trip to Italy and his exposure to the great Italian writers.

3. The English Period – after his retirement. This period includes the construction of the Canterbury Tales.

Some modern scholars question the helpfulness of these periods.

Chaucer aimed to make English customary in Court circles instead of French. The English language was being liberated at this time and was used more across the spectrum. By the late 1300s it was acceptable in literature in the Court. The English period, however, still had many echoes of French and Italian influence.

The character of the pardoner is exploited throughout this tale. It is more a boastful admission rather than a story. Finding possibly more fun in vice rather than virtue (or perhaps in wanting to educate his audience), the pardoner is one of Chaucer’s more unpleasant pilgrims. The pardoner is cleverer than one might think at first glance. Despite his, somewhat odd, appearance he is actually a rather intelligent rogue, who exposes himself to the group instead of being exposed in some other way.

His motive is simple – he wants lot of money! The audience enjoy his mock-sermon, as it is full of irony. We also laugh at the fact that the pardoner believes himself to be the object of all that is masculine – which the audience disbelieves due to his overpowering effeminate qualities.

The tale itself reveals more about the pardoner than he realises. He is led to expose who he actually is and his elaborate faï¿½ade is shattered. His downfall is highlighted at the end with a failed attempt to sell the pilgrims his pardons. The final nail in the coffin is hammered in by the Host, Harry Bailey.

Notes on Geoffrey Chaucer's life and the Pardoner's tale. (2020, Jun 02). Retrieved from https://studymoose.com/notes-geoffrey-chaucers-life-pardoners-tale-new-essay 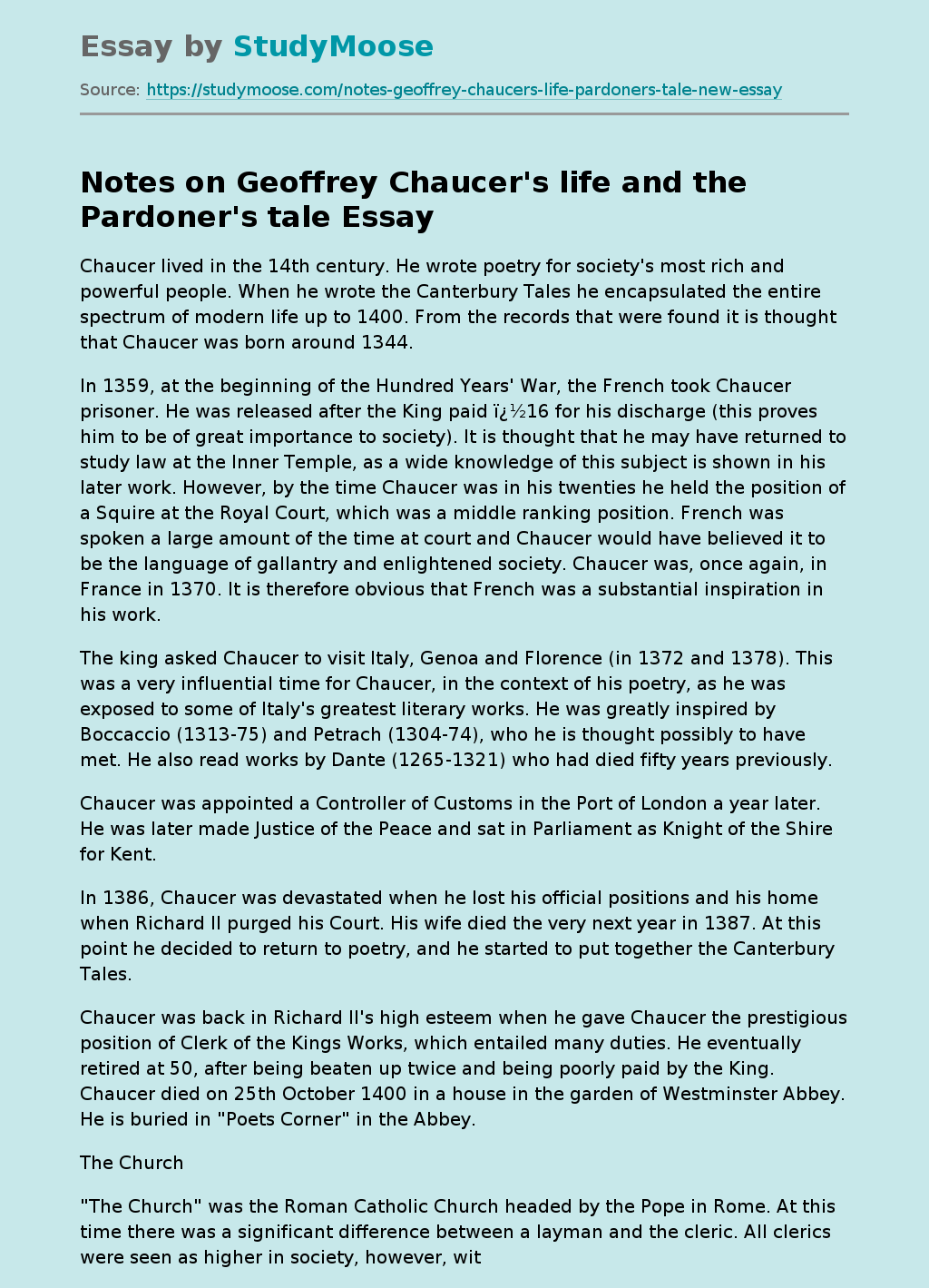