On the 20th and 21st September 2006, a field trip was undertaken to Queensland’s North Stradbroke Island (NSI). Five various sites were visited to help compile a suitable management plan for the protection and conservation of NSI. The five habitats observed were One Mile Beach, Myora Springs, Main Beach, 18 Mile Swamp and Brown Lake. At One Mile Beach, seagrass quadrates were observed and information on the organisms observed were recorded.

Myora Springs was visited to investigate mangrove habitat and was again observed for organisms.

Sand dunes of Main Beach were studied with a dune transect being constructed and the location of different organisms were recorded. At 18 Mile Swamp, water tests were completed and collections of organisms recorded to show the health of the swamp. The final site was Brown Lake where further water tests were completed and organisms observed to compare against 18 Mile Swamp. Subsequently, a Management Plan, focusing on restoring the natural ecosystem, has been compiled.

This plan details the necessary strategies required to maintain the ecosystem in the future through sustainable use.

The information on the variety of organisms at each site was used to create the plan. Mangroves are the key focus of the management plan due to their high importance in the Moreton Bay ecosystems. For that reason, Myora Springs has been discussed in more detail than the other four habitats.

North Stradbroke Island is located in Moreton Bay, 30 km south east of Brisbane, Australia. It is a highly desirable tourist destination due to the range of activities accessible such whale watching, fishing and bushwalking.

The island is also mined for sand, producing copious amounts of sand used in manufacturing each year. The island has significance historically and indigenously, which also provides for tourism. But NSI is most important ecologically, as it supports a diverse range of ecosystems and organisms that rely on the island and surrounding Moreton Bay.

NSI is the second largest sand island in Australia and one of the largest sand islands in the worlds. As a sand island, its surface is that of vegetated dunes that are curved by the wind. The highest dune is Mt Hardgrave at 239 metres and is located five kilometres east of Dunwich. The dunes lay on a sea-cut basement platform made up of 400 million year old sedimentary and metamorphic rock from the Palaeozoic age (CRL). The island was formed by weathered continental rock of eastern Australia that drifted north along the coast by long-shore drift. The minerals were slowly deposited along the ocean floor, creating mounds of sand.

Then the sea level dropped by about 140 metres due to natural variations in climate (CRL). This exposed the sand accumulations that became islands like NSI. The sand from the beaches were blown by the wind and created the dunes with heavier minerals concentrated inland of the island. 6,500 years ago, where the sea-level was elevated, a coastal platform was eroded around the island (CRL). The current beaches are the margin of this platform and support the freshwater swamps at the edge of the underground water table. These swamps are home to wetlands and animals. The variations of climate change the geomorphology of the island, which occurs regularly through time.

NSI has a main sand aquifer that consists of clean quartz sand that is replenished by rain that infiltrates through the ground. Water is lost to interception, storage, evapotranspiration, or runoff into the ocean. This sand aquifer contains approximately 2.3 billion m3, which is why it is used for the Redland Shire Council water supply (CRL). Another hydrological feature of the island is perched lakes forming because of organic material and partially naturally cemented areas inside higher land. Consolidated Rutile Limited, a mining company on the island, uses ground water for their mining operations at their two active mines on NSI. Most water is recycled back to the water table, unless lost due to evaporation (CRL). NSI is like a sponge, in that it is partly soaked with some water leaking off the sandstone and volcanic bedrock that it is sitting on.

Captain Cook on his mission circumnavigating Australia in 1770 was the first recorded European to observe Stradbroke Island. He came within ten kilometres of Point Lookout and named it, however, he assumed it as part of the mainland (Gold Coast City Council). Conflicting sources believe that Matthew Flinders came to Moreton Bay in 1799 (Gold Coast City Council) or 1803 (Redland Shire Council). He is believed to have had contact with some Noonucal Aborigines, who helped him and his crew find fresh water (Redland Shire Council). Surveyor John Oxley then in 1823, explored Moreton Bay to decide whether it was suitable for a convict settlement.

NSI is very significant to Aboriginal tribes as they have inhabited the island for many years For 6000 years (Gold Coast City Council) the Noonucal tribe was located mainly at where Amity Point is today and that the Gorenpul tribe lived around where Dunwich is today (Redland Shire Council). Tribal locations such as burial grounds and artworks is one of the reasons tourists visit the island.

Residents and businesses of Brisbane have recreationally and commercially fished Moreton Bay for many years. Between 2500 and 3500 tonnes of seafood are commercially harvested annually from Moreton Bay and 2000 tonnes of fish are caught by recreational fishers each year (EPA). The annual commercial catch of Queensland fishing is worth several hundred million dollars, and is the fifth largest primary industry in Queensland. Development of the island has created roads through vegetation and towns at significant places. Like all development, this development is impacting on the island but will not be reversed, as it is a highly desirable housing and holiday destination that produces money for governments, councils and residents.

Tourism increased when the development began, with tourists coming to see whales, visit the beach and relax. Tourism makes money for the island and also promotes is biodiversity. Mining produces a significant amount of sand used in manufacturing each year. It is an economical investment, but not ecological. However the companies are doing better, and are revegetating the land and creating the same topography as before mining began after the have mined the area.

NSI is home to approximately 3,500 residents, however the population swells during dramatically holiday periods, reaching about 25 000 people during the Christmas Holidays (Ray White). Tourists come to NSI for the excellent beaches and lakes, the national parks and recreational water activities. The island is continuously mined for sand and the underground bores currently supply the Redland Shire with their water. In future, NSI could supply drought-stricken Brisbane with water. Surrounding Moreton Bay is used for scientific research and tourism. 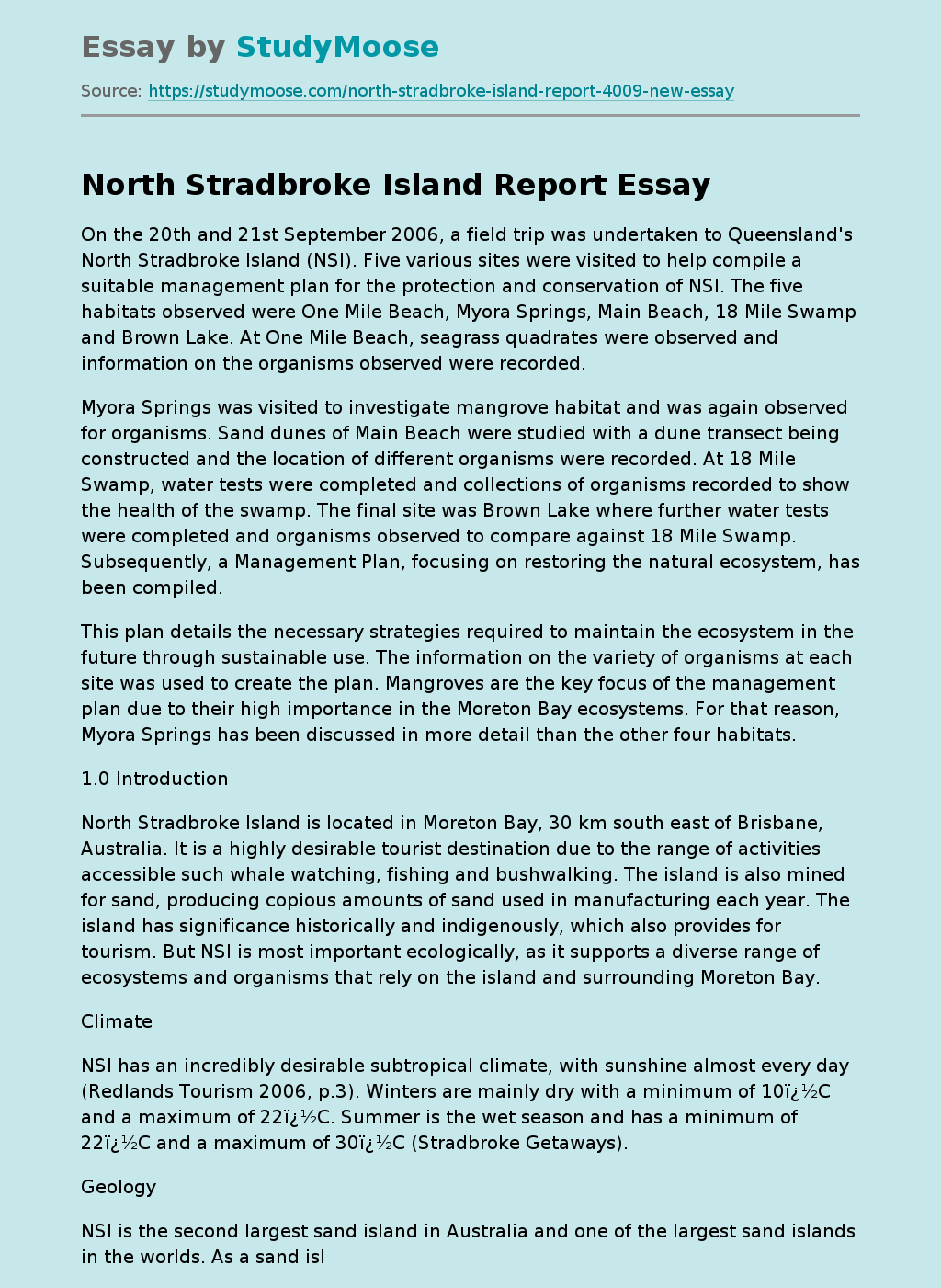