Each of the departments of North Country Auto, Inc. namely, the new cars sales and used cars sales, service, parts, body shop and oil change “operated as part of one business” before George Liddy bought into the dealership. The Department Managers were paid salaries and a year-end bonus. However, feeling that this system would not motivate employees, he devised a system wherein he could track effectively the departmental performance. For this, he developed a system for so that each department will be treated as decentralized profit centers.

Don't use plagiarized sources.
Get Your Custom Essay on North Country Auto, Inc Just from $13,9/Page

This new system requires that cost be broken down per department. Also, the bonuses per each department head will be based on departmental gross profits. So far as the outcome of the new system is concerned, a recent new car purchase sparked friction and disagreements among division heads on the matter of setting of transfer prices and allocation of costs and profits. It was important that as one department aims to maximize profit, it does not negatively affect other departments.

Issues that needed to be resolved include setting of transfer prices between departments, formalizing intercompany transactions, the divisional structure (use of profit or cost center), and the proper allocation of company profits among departments. Problem

The different departments of North Country Auto, Inc. must choose between three pricing systems: base on market price, full retail better than others, and based on book value. Also, the company must decide whether they should continue treating each department independently in order to gain huge profits considering that the manager’s incentives are determined upon the department’s earnings. Point of View In this case, we take the point of view of George Liddy, owner of North Country Auto, Inc.

The trade in allowance of $4800 is the value that is essentially believed by the new and used car sales force believes that the car can be sold. Considering the market price of $3500, the calculated profit is $1700. But, it should be recognized that this profit is at the expense of the $1300 profit from the initial transaction. This is due to the difference between the car’s trade value ($4800) and the market price ($3500). With this, the used car manager must receive the credit or consequences for the profit or loss. This is due to the fact that the used car managers are the appropriate ones to receive incentives in selling the used cars. On the other hand, the new car managers are the ones to receive the incentives in increasing the trade-in value of the cars above the market value. This in turn, makes it easier for people to buy new cars. The illustration above brings up the issue of having the used car manager receive incentives because of the car’s value determined by the new car manager

Explanation on $59000 loss on wholesaling of used cars
The loss may have occurred because new car owners are pushing for trade-in car values above market valuations on their used cars. For example, if new cars are sold for $4800 and used cars for $3500, the used car group would have a difficult time making a profit. This is because they may have sold the car for $5200 (as shown in the example above). Most of the time, it will be hard for the used car department to sell the used cars above its book value of $3500. Thus, the used car division may incur loss since they are using cost for the used cars that is too high. Recommendations

Incentives should be based on company profits. A better system should be established such that managers of the two departments are given incentives based not on the gross profits of their respective departments but on the profits of the company as a whole. This would help ensure that conflicts of the two departments will be lessened and that the two departments will no longer compete but will work together to enrich the value of the firm. In order to be more profitable, the firm could use blue book values for the trade-in value and use that as the cost to the used car division. However, if it is better for the firm to provide added incentive to customers to trade in their cars, the firm could allow for higher trade-in values but responsibility for those added costs should reside in the new sales division. Regarding the issue of costs, whether it should be at wholesale or retail, it should be considered that North Country is a company offering more on services. The cost of service of making the cars sellable differs minimally from the market price. And these service costs should be added to the cost of used cars in wholesale. The profit on repairs must be akin to competitor’s values as well as to the industry.

QUESTION and ANSWERS
1. Using the data in the transaction, compute the profitability of this one transaction to the new, used, parts, and service departments. Assume a sales commission of $250 for this trade-in on a selling price of $5000. (note : use the following allocations [new,$385; used,$665; parts,$32; service,$114] for overhead expense while computing the profitability of this one transaction. These overhead allocations are also shown as Note 13 in Exhibit 3.)

Using the data in the transaction , compute the profitability of this one transaction to the new, used, parts and service departments. Assume a sales commission of $250 for the trade in on a selling price of $5000

2. How should the transfer – pricing system operate for each department (market price, full retail, full cost, variable cost)?
The transfer pricing system should be operated at full retail . But at the same time care should be taken that the retail transfer price of the repairs should not encourage the used car sales manager to avoid the possibility of losses in her department by wholesaling trade in cars that could be resold at a profit for the dealership. This cud hurt the dealership by making its deals less attractive for new car customers. Hence while maximizing profits in one’s department it should not affect the other departments negatively.

4. North Country incurred a year-to-date loss about $59.000 before allocation of fixed cost on the wholesaling of used cars (see note 2 in Exhibit 3). Wholesaling of used cars is the theoretically supposed to be a break-even operation. Where do you think the problem lies? It is possible that this loss occurred because new car owners were giving customers looking to trade-in existing cars above market valuations on their used cars. If new owners were providing credit for $4,800 for a used car that is worth $3,500, the used car group would have a difficult time making a profit. While there would be times (like the example above) where they could sell the car for $5,200 and still make a profit despite the inflated prices, most of the time they will have difficulty selling the used car above its Blue Book value of $3,500. Therefore, the used car division may be operating at a loss because the cost they are using for the used cars is too high.

5. Should profit centers be evaluated on gross profit or “full cost: profit?

6. What advice do you have for the owners?
The owners of the business should make sure the managers of their various groups are properly incented to do what is most profitable for the firm as a whole. Probably, the firm should use blue book values for the trade-in value and use that as the cost to the used car division. However, if it is better for the firm to provide added incentive to customers to trade in their cars, the firm could allow for higher trade-in values but responsibility for those added costs should reside in the new sales division. On the other hand, if a case can be made that the used cars are worth more to this organization than to the market as a whole because they have an ability to consistently sell used cars above blue book value or because the service organization can increase those used cars more than other organizations can at similar cost, the additional costs of allowing trade-ins above Blue Book value might be appropriately split between both the new car and used car divisions. 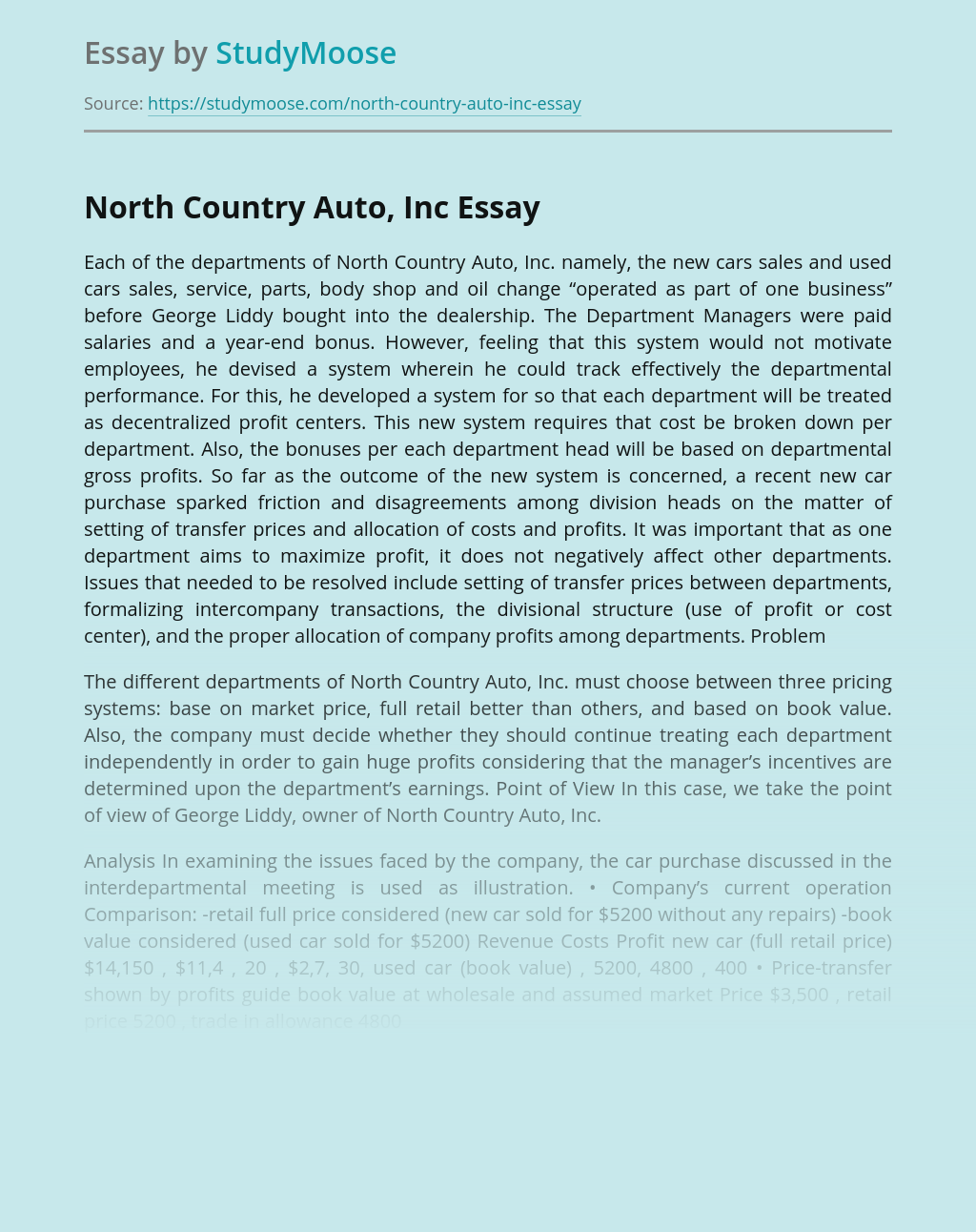 Executive Summary After cautious analysis of Ameritrade and comparable business, I have approximated a 14.784% cost of capital that must be utilized to assess Ameritrade’s approaching financial investments in technology and advertising. After analyzing the historic return on Ameritrade’s investments, I have actually concluded that if the company handles this project a minimum of along... VIEW ESSAY

In order to compete with other milkshake shacks on the same beach of the resort, the small shake in my shack is priced at $5.00, a medium shake costs $7.00, and a large shake is priced at $10.00. My shack offers classic flavors of chocolate, strawberry and vanilla, but also caters to eclectic tastes with... VIEW ESSAY

Alicia Wong has to consider many things before deciding whether she should make the mustard in house or externally. If the mustard she buys externally from TFL, Thain Foods would be spending on average about $.54 cents per liter. While this doesn’t seem that much on a small scale, overtime the cost begins to add... VIEW ESSAY

Historical cost accounting has been a controversial method that experienced many criticisms over a period of time, especially since it considers the acquisition cost of an asset and does not recognize the current market value. Merits and demerits of this method are as follows. The most obvious advantage of HC accounting is objectivity. It is... VIEW ESSAY

1. Ben Lawson’s Custom Fabricators, Inc., creates value for Orleans by making the custom control panel for the elevators. Later on, the business has grown bigger. Ben’s company provides special brackets and panels for the plant. Since “outsourcing”, Ben also makes the entire control panel, complete with the buttons and the wiring harness. 2. Ben... VIEW ESSAY