Nordstrom: Dissension in the Ranks? Essay

Based on my analysis, the Company’s compensation systems poses serious problems which are inadequate measurement of performance through sales per hour (SPH) ratio as the only Key Performance Indicator (KPI), opposing incentive system and Company’s key success factors and unbalanced system for rewards and punishment. These problems are brought about by the incentive system complemented by a couple of Company’s other distinctive policies.

The incentive compensation works through evaluating salespeople on their sales-per-hour ratio. Each employee is given a target SPH ratio which depends on his base hourly wage and store department he belongs.

Don't use plagiarized sources.
Get Your Custom Essay on Nordstrom: Dissension in the Ranks? Just from $13,9/Page

If the employee met the SPH, he is paid for an amount ranging to 6.75% to 10% commission on net sales. Aside from this commission, achieving or surpassing the target SPH will lead to better hours when the shopping is heavier and a better chance of promotion. On the other hand, failure to meet the SPH often results in decreased hours or in some cases, termination.

Having this measure for evaluation and promotion, it causes a serious problem to employees because only a single KPI is being used to measure their performance. Other activities that are considered productive such as different “Non-selling” duties are not given weight on the evaluation. Also, other value-added activities, employees’ improvement, extra milestones are not taken into consideration. It can be concluded that the system is flawed in measuring the employee’s performance.

It is worthy to mention that the incentive system does not support the Company’s Key Success Factors (KSF). It should be noted that the Company’s strongest competitive advantage is its superior customer service. Sales clerks are known in performing extraordinary services which are often outside the sales scheduled time on selling floor.

But because the performance is being measured solely through SPH, salespeople drive of doing these things are low since they are more focused on increasing their sales or extending their work time off the clock. The SPH as a standard measure does not reflect other activities such as meeting customers’ needs through pick up and delivery of items, routine merchandise stocking, store display activities and staff meetings. These activities if formally recorded lower the SPH. This results to less willing employees to perform “heroics”.

The incentive system doesn’t serve its main purpose of creating motivation for employees but rather divert employees’ focus on how to avoid the punishment. There was an unbalanced system between rewards and punishments. I could relate this to the “carrot and stick” system where it utilizes the carrot (rewards) as opposed to the stick (punishments) to motivate employees. However, the punishment was quite too detrimental to salespeople’s career that their main drive on aiming for SPH is to avoid decreased work hours that could eventually lead to termination. It was a selfish driver that other salespeople became “sharks” stealing credit for sales made by other staff or to render extra work off the clock.

Although the aims of Nordstrom’s compensation system and other policies are to give employees emphasis to service, profitability and middle-managerial autonomy, it does not work as the management expect it to be. Even though management achieved a remarkable growth on its financial performance during 1981-1990, the incentive system resulted to change in culture and environment, fears and pressures among employees and complaints and law suits.

One visible change brought by the incentive system is the culture and working environment. The intense competition change the way salespeople work as well as their behavior. Employees tend to work off the clock rather than reporting all the hours so as not to damage its SPH. In order to remain alive and standing at the competition, other employees resorted to misbehaviors such as sharking or destroying other employees (one employee was wrongfully dismissed because of accusations). The unhealthy competition among salespeople contributed to a drop in morale. Moreover, the incentive system resulted to fostering of pettiness and jealousy.

There were also fears and pressures among the employees. Because of the incentive system, employees have fears on not achieving his target that could cost his job in some cases. The lack of clear distinction between selling time and non-sell work time exaggerates these pressures on employees especially when they are doing non-selling activities that could lower their SPH. In addition, the pressures are extremely high for employees are aiming to become an All-Star or top sellers. Peer pressure was also strong among management ranks where an elaborate and very public goal setting process transpired.

Because of the incentive system, employees have decided to voice out their sentiments and grievances. These resulted to a barrage of employees’ complaints, union allegations, law suits and regulatory orders. These events tainted the Company’s reputation and weakened Nordstrom’s financial performance.

Nordstrom: Dissension in the Ranks?. (2016, May 29). Retrieved from https://studymoose.com/nordstrom-dissension-in-the-ranks-essay 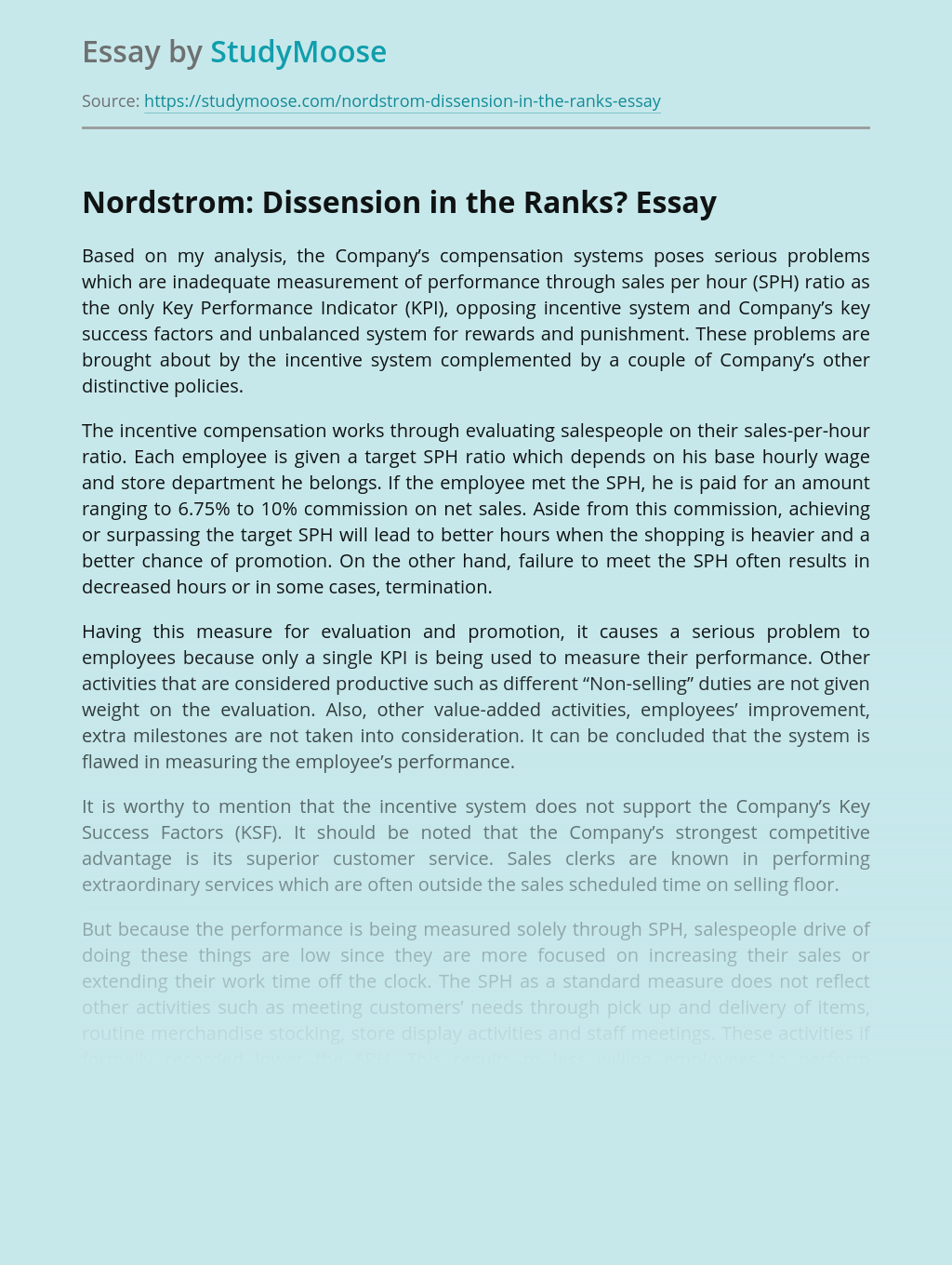 Statement of Relevant Facts: The Rump Organization, a SEC registrant, is planning a corporate restructuring plan. On December 27, 2005 Ronald Rump, the CEO of the organization, along with the Board of Directors approved a plan to involuntarily terminate 100 of the organization’s employees. There is an option for each of the employees to sign... VIEW ESSAY

Abstract As more mothers are becoming employed, the concern of whether a mothers employment has a positive or negative effect on children and family is being questioned. This research paper reviews the effects of mothers’ employment on a child’s behaviour, education and the relationships within the family. It concludes that a mothers employment is indeed... VIEW ESSAY

Introduction Unions are organizations formed to voice out dissatisfactions and represent interests of employees in a company. In the past, employees- especially those who are low in education level and those who are minorities were exploited because they are not aware of their rights. Therefore, unions exist and sustained till today for two main reasons-... VIEW ESSAY

Talent management is defined as a sub-set of hr functions. . There are a lot of definitions to what talent management is for some it is similar to succession planning and to others it is incorporated attempts to develop attract and keep hold of the best people. A lot of companies select different ways of... VIEW ESSAY

Black Corporation, an innovative new technology corporation, has just hired John as the director of their Human Resources Department. As HR Director, John has been tasked with hiring an Administrative Assistant/ Secretary for the advertising department and to develop an employee compensation and benefits package that will be used for that position upon hire. He... VIEW ESSAY