‘Growing Up’
The Instant noodles market in India is finally coming of age after over 25 years The instant noodles category in India was, in a sense, created by Nestlé with the introduction of their Maggi brand in mid-1980s. The concept of ‘2-minute noodles’, positioned as a quick snack option for children, found acceptance with both the children and their mothers as well. Having built and nurtured the category’s evolution, the brand name “Maggi” almost became a synonym for the instant noodles category itself.

Don't use plagiarized sources. Get your custom essay on
“ Noodles industry in India with market share ”
Get custom paper
NEW! smart matching with writer

During the 1990s and 2000s, Maggi faced little competition. Despite the entry of players like Top Ramen (Indo Nissin Foods) in 1991, Ching’s Secret (Capital Foods) in 1996, and Wai Wai (CG Foods) in 2005, Maggi continued to retain its dominant position.

However, in the past few years, we have seen consumer goods giants ITC (Sunfeast Yippee!), Glaxo-Smithkline (Horlicks Foodles), and Hindustan Unilever Limited (Knorr Soupy Noodles) foray into this lucrative market with differentiated product offerings. These brands have brought a competitive intensity to the space.

Even though ‘Maggi’ continues to dominate the market with a share in excess of 75%, the entry of multiple brands and the increasing aggression of existing brands has taken away several percentage points from Maggi’s market share.

The category’s strong growth, and ever widening consumer acceptance, makes it a lucrative option for various players. The instant noodles market is estimated at ~INR 2200 crore (USD 402.

7 million) and is projected to grow at a healthy annual rate of ~15% over the next few years.

There are several reasons behind the growth this category has realized, in India, some of which are mentioned below.


Changing consumer lifestyles – Over the years, the change in consumers’ preferences and eating habits, and their wider global exposure, along with an increasingly younger population, the growth in the middle class, with more nuclear families, and the growing time-poverty (as a result of the rise in the number of working couples) has given a boost to the convenience food segment.

As a result, the instant noodles market has charted a high growth trajectory thanks to its availability, affordability, anytime-anywhere consumption and convenience, being a quick meal requiring minimal cooking. Instant noodles have also emerged from being a snack food or an occasional, alternate eating option to a mainstream food item of choice featuring regularly in consumers’ grocery baskets.

Growing customer base – The emergence of instant noodles has added a new dimension to consumers’ meals; noodles are being consumed not just by kids (who are the core target audience) as an evening snack or a ‘tiffin’ meal but by consumers across all age groups, as an eating option beyond the ‘mundane’ ones. While it continues to be a home snack, it is also increasingly being consumed at workplace, colleges, etc. Geographically too, the appetite for instant noodles is growing with players now eyeing the semi-urban and rural markets. The category’s penetration is low in India (~20-25%), thus presenting a lucrative opportunity for growth.

More options and variants: Players present in the space are innovating and adding value to establish a unique brand proposition in the consumers’ mind. Some of the major developments in this direction include: o

Introduction of new flavors: To kindle the consumer’s interest in the category and also cater to the diverse and changing tastes of the consumer, instant noodles brands constantly enhance their product offerings by adding new flavors. In addition to the classic Masala and Chicken flavors, a wide range of flavors including Indo-Chinese, Chinese, tomato, etc. have been
launched.

Growing focus on health: Despite their fondness for instant noodles, consumers in India hold the notion that noodles are unhealthy, being made from ‘maida’ which is seen as not being as healthy as ‘atta’. To address this concern, brands are proactively introducing ‘healthy’ offerings as part of their product portfolio. Maggi and Top Ramen have their ‘atta’ noodles, while Horlicks Foodles was launched entirely on the health platform, with the noodles made from wheat or multiple grains and including a vitamin-supplying “Health Maker”. Additionally, HUL has also positioned its Knorr Soupy Noodles as a healthy, fun-filled snack.

Category extension from pouch to cup noodles: A vital development in the market was the extension from pouch noodles to cup noodles that are ready-to-eat, on adding hot water, unlike pouch noodles that require to be cooked. The driving factor here is that convenience (the need for an on-the-go meal) is gaining in prominence in consumers’ lives owing to the rise in a younger working population and a migrant population, the increasing population of double income households with more working women, etc. Top Ramen offers different flavors in cup noodles, mini cup noodles, and mug noodles. Maggi and Wai Wai have extended to cup noodles as well.

Modern formats, which provide high product visibility and good product displays, are acting as a good marketing platform for brands to promote their product offerings via consumer schemes like price discounts, bundled offers, sampling for new launches, etc. However, about 80-90% of instant noodles sales takes place through traditional formats (mom and pop stores), which is not surprising since noodles are a regular grocery item.

Thus players need to invest significantly in distribution and establish a widespread retail reach and tap into a larger consumer base. Therefore, distribution remains an important enabler for this category. Another key challenge for players is to maintain price points and margins given the fluctuations in input costs. Usually, they opt to reduce pack sizes, while keeping prices constant, to counter the challenge.

In its journey of 28 years, the instant noodles market has undergone several changes, viz. the entry of several new players, innovations in products and value-addition in packaging, the emergence of modern formats, a shift in consumption towards convenience foods, etc. Going forward, this market will continue to register a doubledigit growth and will witness higher competitive intensity.

The strength of the distribution networks and media campaigns of the new entrants has the potential to be a game-changer and may eventually cause Maggi to face some serious competition, and perhaps even make this pioneering brand fight to defend its dominance. This category is finally coming of age and promises to be an interesting space to watch in the next few years. 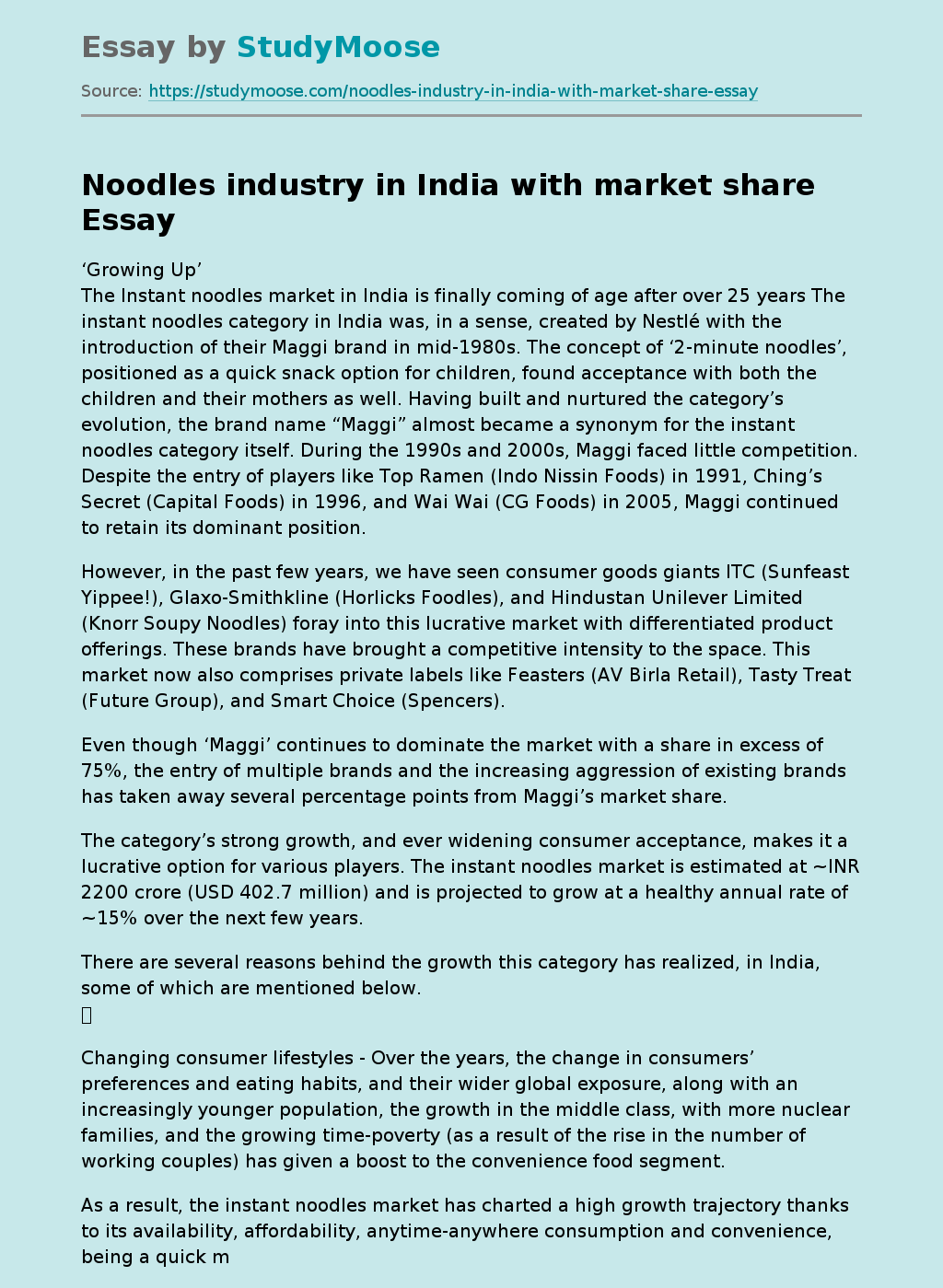