Introduction
Major of India’s energy needs are met out by thermal and other conventional forms. But these are non-renewable in nature. What will happen after say 50 years when the coal gets exhausted? So we need to find an alternative way of extracting energy. In India around 80% of the electricity is got from steam turbines run by coal.

With serious concern globally and in India on the use of fossil fuels, it is important for India to start using renewable energy sources.

Don't use plagiarized sources. Get your custom essay on
“ Non Conventional energy resources in India ”
Get custom paper
NEW! smart matching with writer

India is the 7th largest country in the world spanning 328 million hectares and amply bestowed with renewable sources of energy. In this paper let us see

 The various kinds of renewable energy methods present in India.  Limitations with the current system.
 Possible expansion.
Our main focus in this paper will be solar energy. We would also see other major players in this field, but we will see the detailed analysis of solar energy extraction and expansion.

Wind Energy
The development of wind power in India began in the 1990s, and has significantly increased in the last few years. Wind power can be utilized for drawing water, which is an essential requirement in watering agricultural lands in the rural areas. In addition, it can be utilized for electricity generation. Although a relative newcomer to the wind industry compared with Denmark or the US, domestic policy support for wind power has led India to become the country with the fifth largest installed wind power capacity in the world.

The major drawbacks of this power system are as follows:
 Electricity production depends on- wind speed, location, season and air temperature. Hence various monitoring systems are needed and may cost expensive.
 High percentage of the hardware cost (for large WT) is mostly spent on the tower designed to support the turbine
 The total cost can be cheaper than solar system but more expensive than hydro.
The state and central governments are providing various subsidies and have come up with new policies to enhance the wind power generation in India. Wind turbines are becoming larger, efficiencies and availabilities are improving and wind farm concept is becoming popular. It could be combined with solar, especially for a total self-sustainability project.

The economics of wind energy is already strong, despite the relative immaturity of the industry. The downward trend in wind energy costs is predicted to continue. As the world market in wind turbines continues to boom, wind turbine prices will continue to fall.

Biomass Energy
Among the renewable energy sources, biomass plays a vital role especially in rural areas, as it constitutes the major energy source to majority of households in India. Biomass energy is the utilization of organic matter present and can be utilized for various applications.

 India produces about 450-500 million tons of biomass per year, which is 32% of all the primary energy use in the country at present.  The current share of biofuels in total fuel consumption is extremely low and is confined mainly to 5% blending of ethanol in gasoline, which the government has made mandatory in 10 states.

Biomass energy can play a major role in reducing India’s reliance on fossil fuels by making use of thermo-chemical conversion technologies. In addition, the increased utilization of biomass-based fuels will be instrumental in safeguarding the environment, creating new job opportunities, sustainable development and health improvements in rural areas. The integration of biomass-fuelled gasifies and coal-fired energy generation would be advantageous in terms of improved flexibility in response to fluctuations in biomass availability with lower investment costs.

Solar Energy
Solar energy is genesis for all forms of energy. This energy can be made use of in two ways the Thermal route i.e. using heat for drying, heating, cooking or generation of electricity or through the Photovoltaic route which converts solar energy in to electricity that can be used for a myriad purposes such as lighting, pumping and generation of electricity. With its pollution free nature, virtually inexhaustible supply and global distribution- solar energy is very attractive energy resource. There are two different perspectives in utilizing solar energy: 1. Solar for grid connected electricity:

Grid interactive solar energy is derived from solar photovoltaic cells and CSP Plants on a large scale. The grid connection is chosen due to following reasons:


Unlike conventional thermal power generation from coal, they do not cause pollution and generate clean power.

Abundance of free solar energy throughout all parts of world (although gradually decreasing from equatorial, tropical, sub-tropical and polar regions). Can be utilized almost everywhere.
2. Solar for off-grid solutions:
While, the areas with easier grid access are utilizing grid connectivity, the places where utility power is scant or too expensive to bring, have no choice but to opt for Page | 6

their own generation. They generate power from a diverse range of small local generators using both fossil fuels (diesel, gas) and locally available renewable energy technologies (solar PV, wind, small hydro, biomass, etc.) with or without its own storage (batteries). This is known as off-grid electricity. Remote power systems are installed for the following reasons:

Desire for independence from the unreliable, fault prone and interrupted grid
connection.

No overhead wires- no transmission loss.

The technologies present in harvesting solar power are:
1. Solar photovoltaic:
Solar photovoltaic (SPV) cells convert solar radiation (sunlight) into electricity. A solar cell is a semi-conducting device made of silicon and/or other materials, which, when exposed to sunlight, generates electricity. Solar cells are connected in series and parallel combinations to form modules that provide the required power. These are the different solar cells used:  Crystalline Silicon solar cells (C-Si): Monocrystalline and Polycrystalline.  Thin-film solar cells: Amorphous Silicon Solar cells (A-Si), CIGS, CdTe. PV modules are manufactured by assembling the solar cells after stringing, tabbing and providing other interconnections.

This is the next big leap in the energy sector, but this too has its own limitations such as:
 Initial cost involved in setting up the plant is high. Also a huge amount of space is required.
 Proper sunlight is required for these systems to work effectively and efficiently.
 On a cloudy day or during nights and rainfall, this system fails to produce power, thus requiring a backup power plan, so this cannot be completely relied upon.
 Many solar grids are setup in desert areas where no grids are present, making it costly to transmit.
 Maintenance cost is quite high and a specialized technician is required for it.

There may be some difficulties and limitations in this field, many of which can be rectified by proper government involvement during large scale implementations. India needs a brisk involvement in this field considering the facts that:  We get plenty of sunlight due to its proximity to the equator and we receive an annual average of 4-7KWh per day for every square meter, meaning we receive a lot more sunlight than what we can use in a year, making it an abundant source of power.

 We are a poor source for conventional fuel sources. We are dependent on the Gulf countries for its oil supplies. With the oil prices skyrocketing and the reluctance of the Indian government to hike the prices of LPG and kerosene, Indian oil companies are suffering major losses. Even electric supply in the country is unable to meet the burgeoning demands of the growing population and businesses.

 India does not have resources to pay the huge bills of the oil producers.

Now there are many researches going on in this field to increase the output as well as store the produced energy in SPV cells. Also many conventional coal thermal power plants are looking forward to installing the solar thermal plant to pre heat the water to reduce the use of coal, which is an effective way to cut down the use of coal. New grids and easier and cheaper ways of power transmission are being considered owing to the fact that a huge loss in power as well as money is involved in long range transmission of this produced power.

The state governments are coming up with new policies to increase their capacity and mend out their acute power crisis. For e.g., the Government of Tamil Nadu has recently unveiled its new Solar Energy Policy which aims at increasing the installed solar capacity from the current approximate of 20 MW to over 3000 MW Page | 9

by 2015. The policy aims at fixing a 6% solar energy requirement on industries and residential buildings for which incentives in the form of tax rebates and current tariff rebates of up to Rs.1 / unit will be applicable to those who comply with the Solar Energy Policy. The policy also gives an option to those industries/buildings who do not want to install rooftop solar photo-voltaic systems to invest in the government’s policy and be given the same incentives as explained above.

Even many private players are slowly but steadily coming up in this sector, knowing its future value. Government is providing subsidies and aid to these private companies to increase their involvement in this sector. Solar Power India, Tata and Reliance Industries are some of the big money players who have major plans for this industry. This will give a big boost to this field as these companies can invest a lot of money in research to make the technology cheaper. This, in turn, will make solar energy accessible to the common man. As more and more people take to solar power, the costs are expected to
reduce. 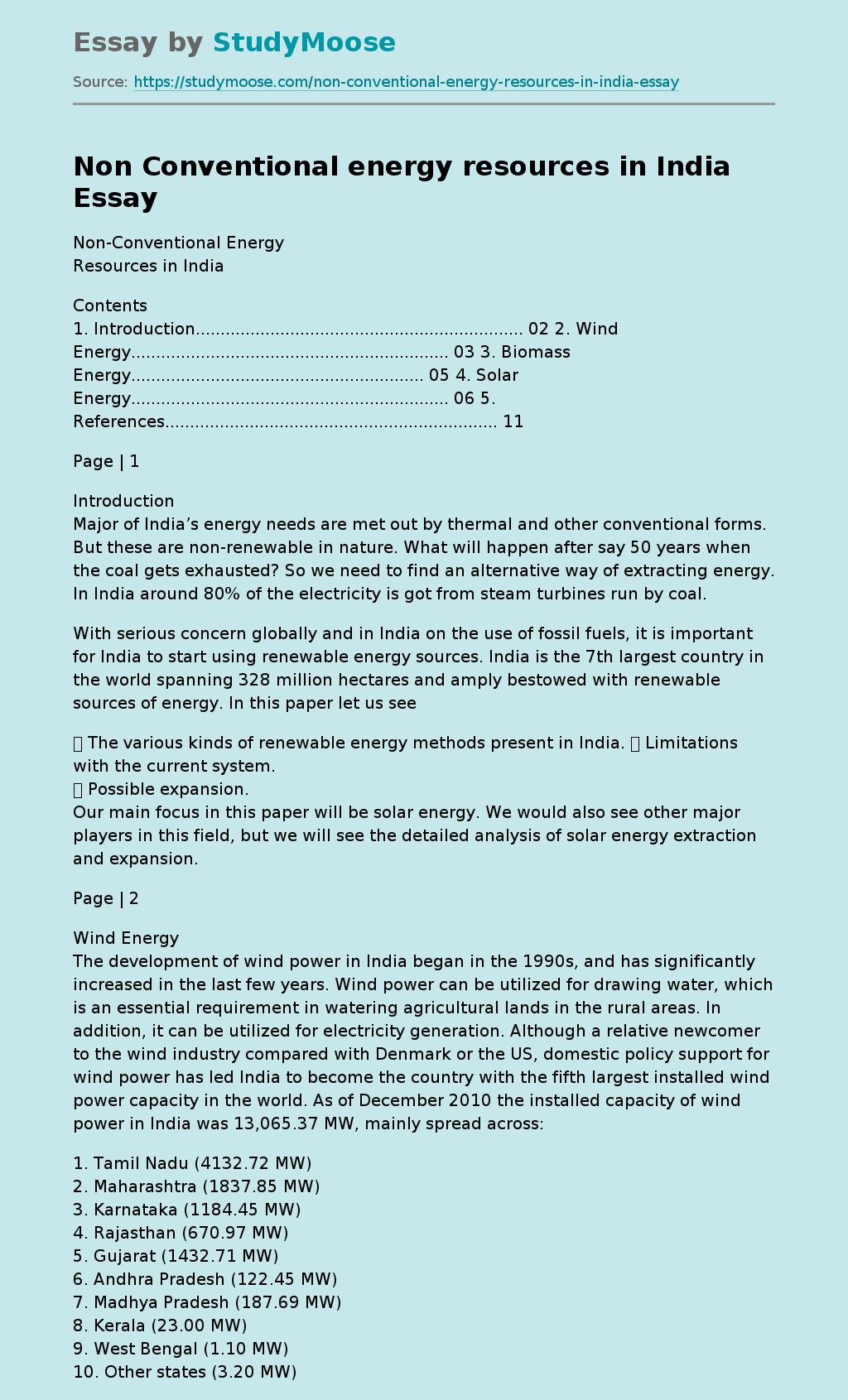