Jack Davis’ 1986 play No Sugar is a realist drama which examines the trials, tribulations and eventual survival of Millimurra-Munday family through the Great Depression as they are forcibly removed from their homeland in Northam to Moore River Native Settlement. The survival of their culture is dependant on the way that individuals shape their identity and in this play Davis shows how family is the cornerstone on which identity can be maintained even in the most traumatic of circumstances.

Jimmy Munday survives and thrives as an individual because he has the support of his extended family.

Don't use plagiarized sources. Get your custom essay on
“ “No Sugar” by Jack Davis Drama Analysis ”
Get custom paper
NEW! smart matching with writer

He finds his identity within his family and this security allows him to critically assess and comment on the motives behind government decisions such as the moving of Indigenous people from the Government Well Aboriginal Reserve in Northam to Moore River. ‘Whole town knows why we’re goin’. ‘Coz wetjalas in this town don’t want us ‘ere’ (p.50). Jimmy’s identity and survival are built on outward protest but other members of his family find more subtle forms of protest.

Gran Munday is the matriarch and cornerstone of her family. She refuses to assimilate into the Indigenous identity determined by ‘white’ people. She looks after her family providing them with a sense of cultural and practical knowledge as is demonstated when she delivers Mary’s baby (p.102). Although Gran is a survivor who passes on knowledge and language to her children and grandchildren, Billy Kimberley is an example of someone who has lost his family and sense of identity.

Being the last of his tribe and people, Billy Kimberley has no family, or extended family and can be seen to be culturally caught between two worlds and lacking a true sense of identity. It is dramatically ironic that he is a ‘successful’ prototype of assimilation yet is rejected by both ‘white’ and Indigenous societies. The children even mock him and call him a traitor or ‘black crow’ (p.90) Ultimately, Jimmy’s line will die out with him and thus not only will he not survive and the culture, traditions and line of his family will die with him also. It is this fact which also seems to await Mary Dargurru whe we first meet her in the play.

Mary is a young girl from the Kimberley region whose potential fate can be paralleled to that of Billy who is from the same region. However, when she meets and falls in love with Joe Millimurra, she finds a new family in the Millamurras. She not only finds her own identity through family but has the potential at the end of the play to pass that identity on through her family to her own child, baby Jimmy.

As a young man on the cusp of manhood Joe Millimurra has a sense of his own destiny as shaped by his family and their connection to culture and their homeland near Northam. He learns from his family that he must stand up for what he believes in and this shapes his identity and survival. At the end of the play, Joe, Mary and their new born baby Jimmy go off with supplies and an empty sugar bag, not filled with the short term sweet platitudes of ‘white’ handouts, violence and condescension but with a supplies, a homemade knife and a sense of family, culture and identity that is hopefully enough to help them forge a new future in an old homeland.

No Sugar is a play ultimately about family, identity and survival. Through the character of Jimmy Munday, Davis provides us with an Indigenous man, who although troubled by the injustices and dispossession thrust upon him, is still able to find a sense of purpose in his family. He does not survive physically but his legacy will live on through his nephew and his nephew’s son who bears his name. Gran Munday is shown to be a cornerstone crucial to the resilience and survival of all of her family through the connection she provides to their culture. This can be seen to be contrasted with Billy, an Indigenous tracker from the Kimberley who has lost his family, his culture and his identity and seemed doomed to a fate of not surviving and ‘fading away’. But the ultimate survivors of the play are Joe and Mary who both gain a sense of identity through family. It is this sense of identity gained through family that seems not only crucial for their survival as they go reclaim their ‘place but which will hopefully become the cornerstone for survival and hopes of the next generation of Indigenous people as symbolized by their baby son, Jimmy. 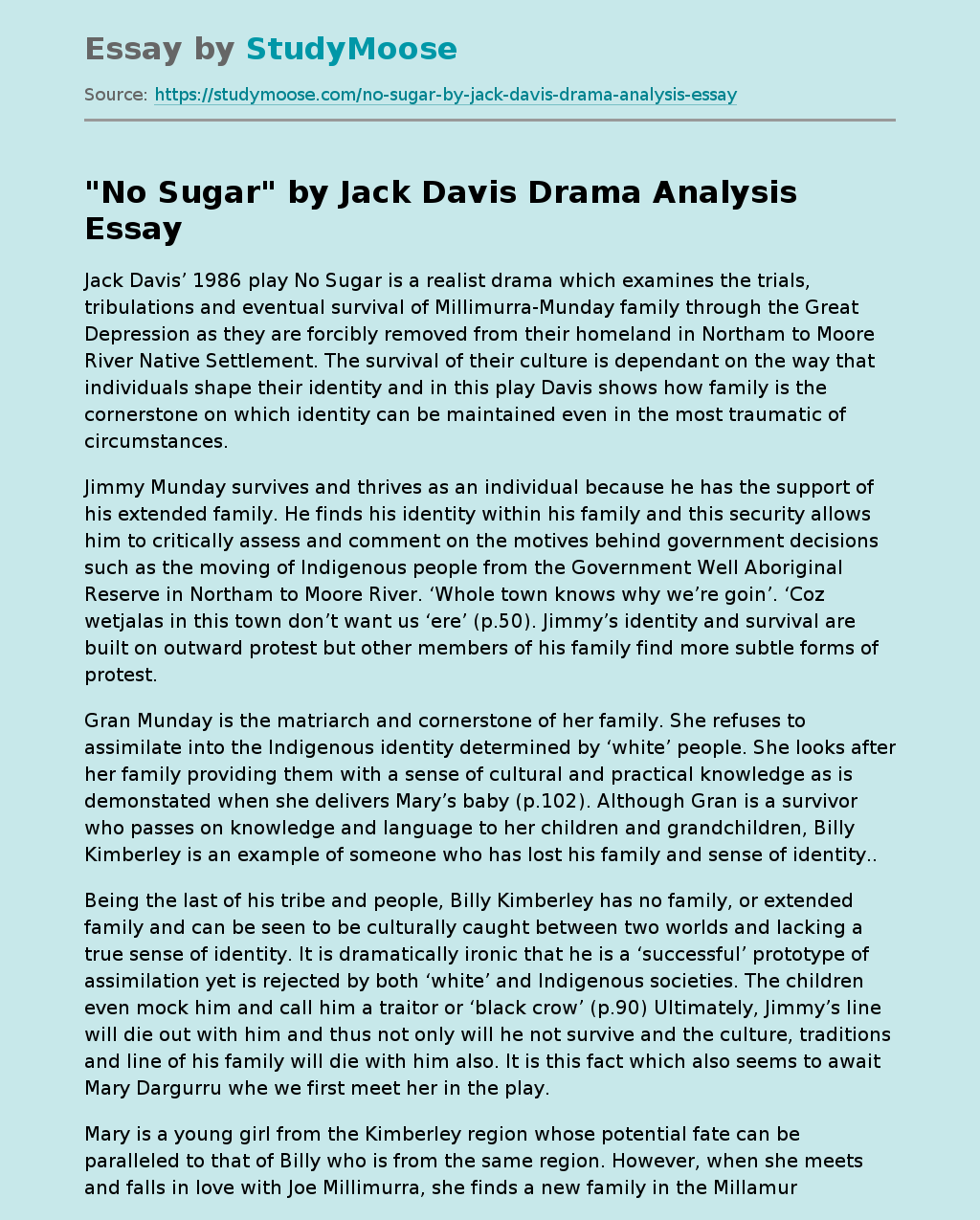