'No Dialects Please' by Merle Collins

Task: Using any literary or linguistic approach with which you are familiar, write about how the impressions of the speakers are created in the poem ‘No Dialects Please’ by Merle Collins.

The poem takes the form of a reply to a competition “looking for poetry of worth” but the entry requirements, to the discus of this writer who is of African origin, state they must use “NO DIALECTS PLEASE”. In response the poem is written in the African accent, using phonetic structures of words, and including dialectical vocabulary but still containing a point both strong and emotive giving the poem the ability to fit the requirement for, poetry of worth for a writin that could wrap up a feelin an fling it back hard with the captive power to choke de stars”.

Turn in your highest-quality paper
Get a qualified writer to help you with
“ ‘No Dialects Please’ by Merle Collins ”
Get high-quality paper
NEW! AI matching with writer

This is done in the poem, which tells of the writer’s feelings due to the suggestion that a dialect could not meet these requirements for poetry. Throughout the writers feelings are conveyed to the reader and are obviously strong, making the poetry that of the category which the competition was looking for which was exemplified by the powerful metaphor “captive power to choke the stars”.

In the poems graphology two main characteristics indicate the emotions of the writer.

The use of uppercase characters and explanation marks indicate an exaggeration in the tone of the words, for instance

Another simple way that feelings are conveyed is through evaluative adjectives in the direct speech of the writer provided by the monologue form, for example when the writer is speaking about the lack of knowledge the British population has about the history of their language she says, “how dis British education mus really be narrow”

“Is not only dat ah think”, throughout the second verse and the pattern of three in the third verse, bout a culture o we own a language o we own a identity o we own”

The writer also says,  “But if dat not enough pain for a body to bear”, indicating the suffering she feels is almost unbearable causing her a great amount of suffering.

The writer’s defiance from the English when she states, “Make me ha to go and start up a language o me own shows she feels like she does not want to be included when they are told,

“We’re all British!”, but would rather have her own culture conveyed through her language including her dialect.

Overall the whole poem acts as an example to show how the competition is wrong to remove dialect from poems, as it will prevent the conveyed feelings to be received by the audience. This is done by the whole poem being in the writers dialect but still being intelligently, shown by the cohesion and educated lexis, and effectively powerful.

'No Dialects Please' by Merle Collins. (2017, Sep 23). Retrieved from https://studymoose.com/no-dialects-please-by-merle-collins-essay 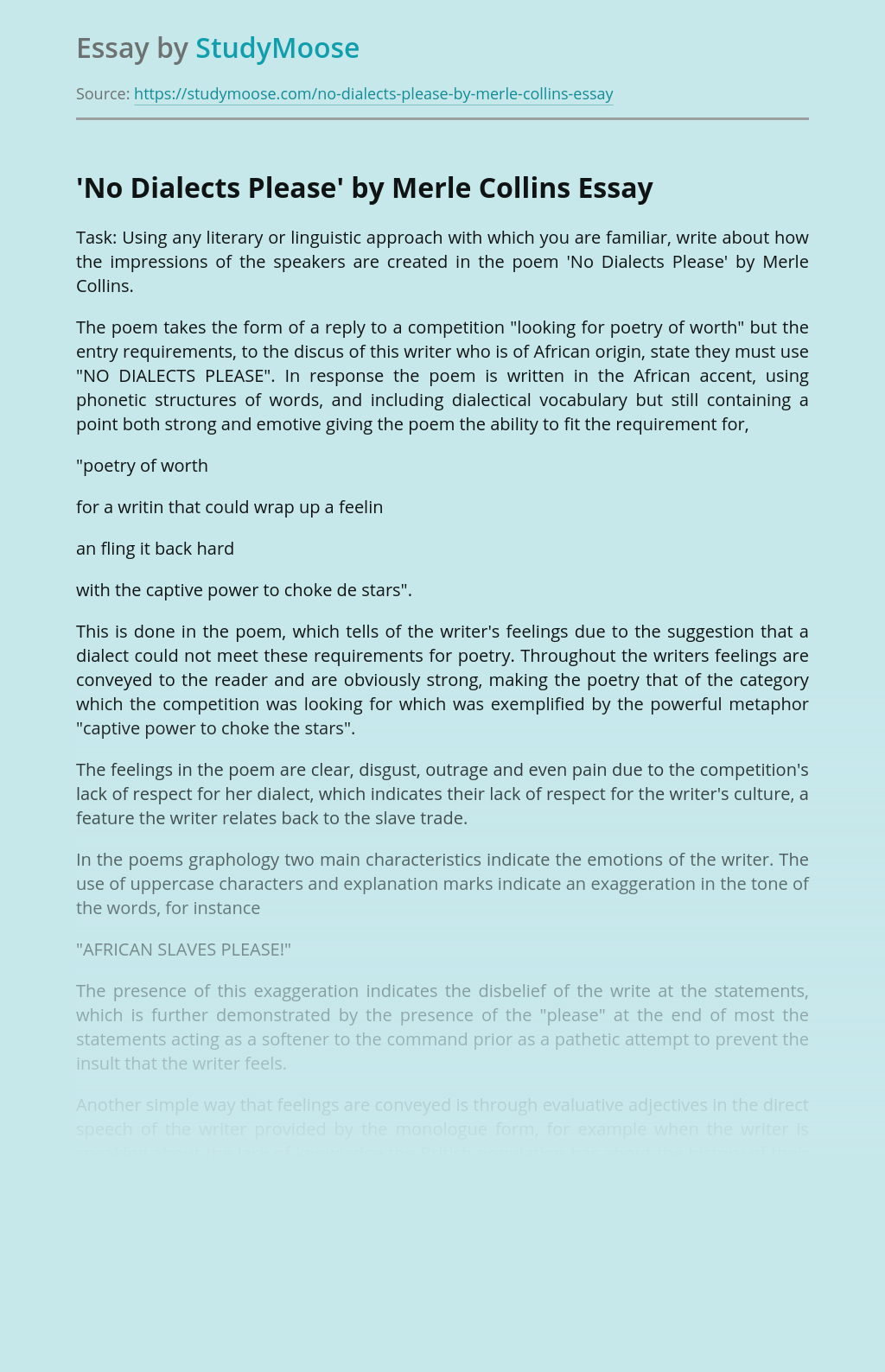 Turn in your highest-quality paper
Get a qualified writer to help you with
“ ‘No Dialects Please’ by Merle Collins ”
Get high-quality paper
Helping students since 2015
Stay Safe, Stay Original