It can be seen from the passage that Nike’s Asian factories audited hundreds of factories in 2003 and 2004 and found cases of abusive treatment in more than a quarter of its South Asian plants. And in 2005 Nike returned to report its social and environmental practices. It said that staffs and employees work in a poor environment. Between 25% to 50% of its employees and staff in the region restrict access to toilets and drinking water during the workday. Besides, a lot of staff have to work for extra hours per week and wage level is lower than in other industries.

Don't use plagiarized sources. Get your custom essay on
“ Nike’s CSR Challenge ”
Get custom paper
NEW! smart matching with writer

These kinds of social and environmental issues not only happen in Nike, but also in many other industries. However, Nike start to report the detail of all its factories and in fact Nike to devote more to improving conditions than its competitors. New method to solve CSR problems are needed. Nike comes out a new realization. This new realization lead to a new strategy, which involves the company engaging labor ministries, civil society,to establish companies’ standards of social and environmental performance.

Nike have realized that the responsibility of one is to work towards the accountability of all. The strategy is that instead of the closed system , company will establish an open system. Nike also realize that the company’s future depends on the way customers, suppliers, investors and others relate to it. Leadership is another challenge that Nike is facing. Traditional leadership make the manager only do their duty, but not thinking about other fact.

New Corporate leadership require managers be ‘leaders beyond borders’,which means they should reach across such borders to engage others in dialogue and action to address. In addition ,Nike should consider wider issues of trade flows, governance, media, financial markets and politics,if it wants to survive in new open system. Nike’s efforts will be meaningless if Nike do not make changes in financial markets

Q1: In referring to the opening profile and the closing case for this chapter, discuss the challenges regarding corporate social responsibility that companies in the apparel industry face in its supply chains around the world?

There have been cases reported abusive treatments in more than a quarter of its South Asian plants. Another report is that 25%-50% of factories in the region restrict access to toilets and drinking water during the workday. The same percentage that was reported also applied to factories denying workers at least one day off of the seven days they already work.Nike’s CSR Challenge highlighted that difficulty of bring wholesale to change to a company that isn’t centralized. Instead the challenge is now to reform the way business is done. Leadership was traditionally seen as guiding employees towards the goal of the company. What is needed is a more open form of leadership that calls for collaboration among mutually parties in order to solve systemic problems.The challenges are too reshape the signals being given out by its supply chains group to itself and its competitors. So that the companies can operate in a sustainable and just way, which is also financially viable

Q2: Discuss the meaning and implications of the statement by a Nike representative that“consumers are not rewarding us for investments in improved social performance in supply chains.”

Nike start to create a positive environment and change system for upgrading.As a result ,Nike will attract more consumers and bring feedback from consumers. This will help Nike continue going forwards.

Q3: What does it mean to have an industry open-systems approach to social responsibility?What parties are involved? Who are the stakeholders?

Q4: What is meant by “leadership beyond borders”?

It means people who can see across borders created by others,such as the borders of their jobs,and reach across such borders to engage others in dialogue and action to address systemic problems.

Q5: Is it possible to have “a compatibility of profits with people and planet”? Whose responsibility is it to achieve that state?

Yes ,it is possible. Companies’ first aim is profit. Through making profit a company can survive .However ,at the same time ,company should take care of their staffs and employees,or they will fail to make the profit. In addition ,environment is also very important. Company should protect the environment as well as making profit.Environment should not be neglected. People, environment and profit should be balanced.It’s all consumers, suppliers and investors,and employees responsibility to achieve that state.

This case talks about CSR challenges that Nike is facing. The fact is not only Nike, but also other industries are facing these challenges. However, Nike devotes itself to making a new strategy. It makes a positive environment. Besides, leadership is also a challenge for Nike and other industries. Companies should focus on “leadership beyond borders”, which means management is expected to beyond borders created by others such as the borders of their job, and reach across such borders to engage others in dialogue and action to address systemic problems. In a word, environment, profit, and human should be balanced. 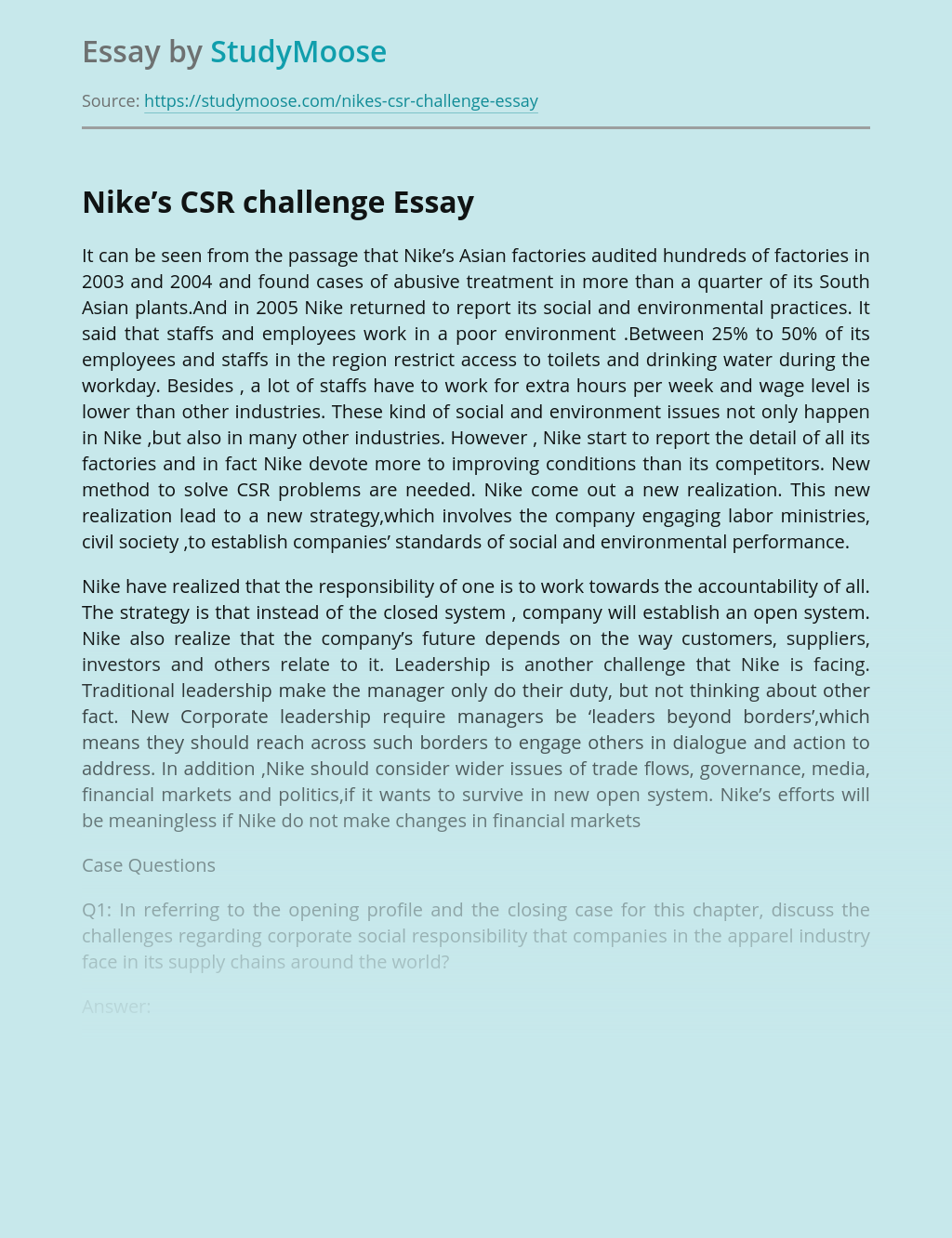