Night of the Scorpion

The “Night of the Scorpion” is written from the point of view of a child looking on over his mother. The description of what he saw was of some body looking in on the action but not taking part. The writer did not convey much emotion from himself to what was happening. If anything he had some sympathy towards the scorpion, “Ten hours of steady rain had driven him to crawl beneath a sack of rice”, in the rain.

Scorpion stings maybe expected where they live, because they all seemed to know what to do.

Don't use plagiarized sources. Get your custom essay on
“ Night of the Scorpion ”
Get custom paper
NEW! smart matching with writer

They live in a very close-knit community, which believe in God and the devil, so they are religious. Their religion is different from Christianity. Placing emphasis on medicine, they prefer religion. This is due to the fact that there were no doctors available. Many different beliefs are associated with the scorpion such as the devil, darkness, evil.

His works are an important part of Indian literary history. His major themes are love, loneliness, creativity and human foibles. Via his works, he satirized evil practices, superstitions and ignorance of the Indian people, as he has in this poem. He made Indian English poetry digestible for the common man. He wanted simplicity of thought and language in modern poetry. He was awarded the Sahitya Akademi Award for his poetry collection – “Latter-Day Psalms.”

This poem, Night of the Scorpion, is one of his most famous poems.

It has been written in ‘free verse’ which means that it is highly irregular in terms of line length and does not follow any rhyming pattern. The ‘Night of the Scorpion’ captures a scene in a rural Indian village where being bitten by a scorpion was a common fear. The narrator is a young child witnessing a horrific event in his life- his own mother writhing in agony of a scorpion’s sting. Along with the anguish of the family members, the poet describes the concern for the mother by the villagers.

The child describes the scorpion as the Devil Himself by using adjectives like ‘diabolic’ and also refers to it as the metaphorical ‘Evil One’. However, the poet also says that the scorpion had been forced to “crawl beneath a sack of rice” by the torrential rain and later had to “risk the rain again”. This shows a subtle feeling of pity underlying the fact that the scorpion was the Devil Incarnate.

Imagery is one of the main literary devices used in this poem. “With candles and lanterns
Throwing giant scorpion shadows
On the sun-baked walls”
This aids us to visualize the scene of Villagers searching for the scorpion outside the cottage in the steady downpour amidst the sun-baked huts.

In most rural Indian villages, the entire village is like a community. Each family shares in each other’s joys and sorrows. This is evident since the poet uses the line “the peasants came like swarms of flies.” As a hyperbole, this line shows their immense numbers. It also shows that the people were more of a hindrance than a help like a ‘swarm of flies’. It also shows how, in close-knit communities, all news spreads like wildfire. The fruitless passing of time is also shown by the line, “More candles, more lanterns, more neighbours,

More insects and the endless rain.” Another aspect of rural society, unfortunately, is their belief in baseless superstitions and beliefs. Having being denied proper education facilities, they remain unaware of the truth. These uneducated villagers are clueless about proper medication. In an effort to help, they pray to god to paralyze the scorpion so that, as their superstition states, the poison would also be paralyzed in the mother’s blood. The villagers also believe in the Karma philosophy. This philosophy was born in India and in certain cultures it is intertwined with the concept of reincarnation, or life after death. The villagers chant, “May the sins of you previous birth

Be burned away tonight” And, “May the poison purify your flesh Of desire and your spirit of ambition” Thus, they imply that the mother’s desires and ambitions are the sins that she is paying for.

Finally, the mother’s ordeal comes to an end. In a display of mother’s unconditional love, the poem ends with the mother saying, “Thank god the scorpion picked on me and spared my children”.

Night of the Scorpion. (2016, May 09). Retrieved from https://studymoose.com/night-of-the-scorpion-essay 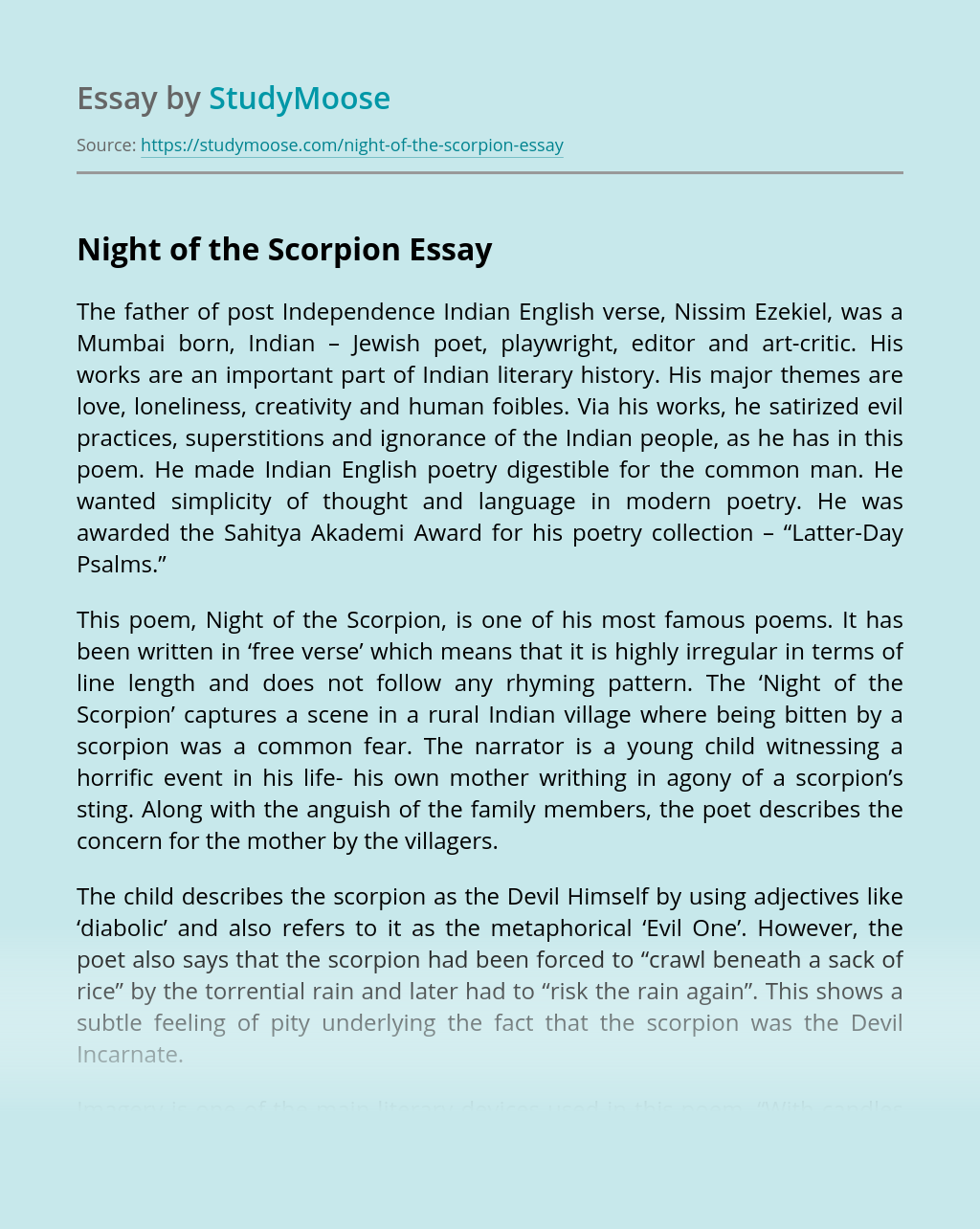