There is no doubt about it that in today’s generation the Internet is one of the best phenomenal creations invented. By simply having a computer, cell phone, tablet, ect, anyone and everyone can access the Internet. But can this powerful yet simple creation have a drastic effect on how the new generation operates today? The entire world is rapidly becoming obsessed; everywhere you look you’re bound to see something related to the Internet. Search engines, texting, twittering, blogging; to name a few.

Don't use plagiarized sources. Get your custom essay on
“ Nicholas Carr vs Steven Pinker ”
Get custom paper
NEW! smart matching with writer

We have all heard of at least one of those internet friendly applications. But can those applications become too friendly to the point where they are a distraction to the young mind? Can those applications hinder how the human brain functions? There are numerous arguments, views and statements regarding such an important question. Two writers that I researched share their opinions and views based off of how the internet has affected others intelligence today. These two writers go by the name of Nicholas Carr and Steven Pinker.

Without having any knowledge of what the articles are about one only needs to read there titles to distinguish the differences between the two. Where as Nicholas Carr’s article is titled, “Does the Internet Make You Dumber? ” Steven Pinker’s article is titled, “Mind over Mass Media”. Both writers have completely different types of titles but one can assume that they are responding to the same subject. After thoroughly reading both articles, Nicholas Carr and Steven Pinker have completely different views when it comes down to how the internet influences others.

Firstly, Nicholas Carr addresses heavily how in fact the internet does make you dumber. All throughout the article he gives examples of studies aimed at showing how the internet doesn’t positively contribute to the brain at all. As stated from the article Nicholas Carr explains how “People who read text studded with links, comprehend less than those who read traditional linear text. How, people who watch busy multimedia presentation remember less than those who take in information in a more sedate and focused manner”.

It is quoted: “If electronic media were hazardous to intelligence, the quality of science would be plummeting. ” Also, “Yes the constant arrival of information packets can be distracting or addictive, especially to people with attention deficit disorder. But distraction is not a new phenomenon. The solution is not to bemoan technology but to develop strategies of self-control as we do with every other temptation in life. ” Steven Pinker is trying to get the reader to understand that the internet doesn’t essentially make you dumber but it does hinge at one’s attention span.

Outside of the internet distractions are common everywhere. One can become distracted by their job, parents, work, internet, ect. Because of these interruptions Steven Pinker’s makes it known that all distractions require self-control. If one doesn’t have self control over an issue they will become addicted. Lastly my research wasn’t over. It wouldn’t be right if I didn’t get a third opinion to help provide some extra study. A third writer that I came across was a woman named Sherry Turkle.

Although she does not mention how the internet may interfere with learning or brain capabilities she does still presents other exceptionally important factors. In conclusion, in comparison of the two primary articles that I researched I would ultimately have to agree with the Nicholas Carr piece. I feel as if the Nicholas Carr piece will convince more people. His article compared to Steven Pinker’s has a lot of legitimate studies and facts.

Where, Steven Pinker’s article comes off as an opinion piece with little to no background information or supporting references. I would want to believe that the mind is in fact over mass media but Steven Pinker’s article doesn’t defend his title strongly at all. Thus, leaving me with the conclusion that the internet is a major distraction, can hinder how I use my brain properly, and can jeopardize my in person communication skills that I have available. 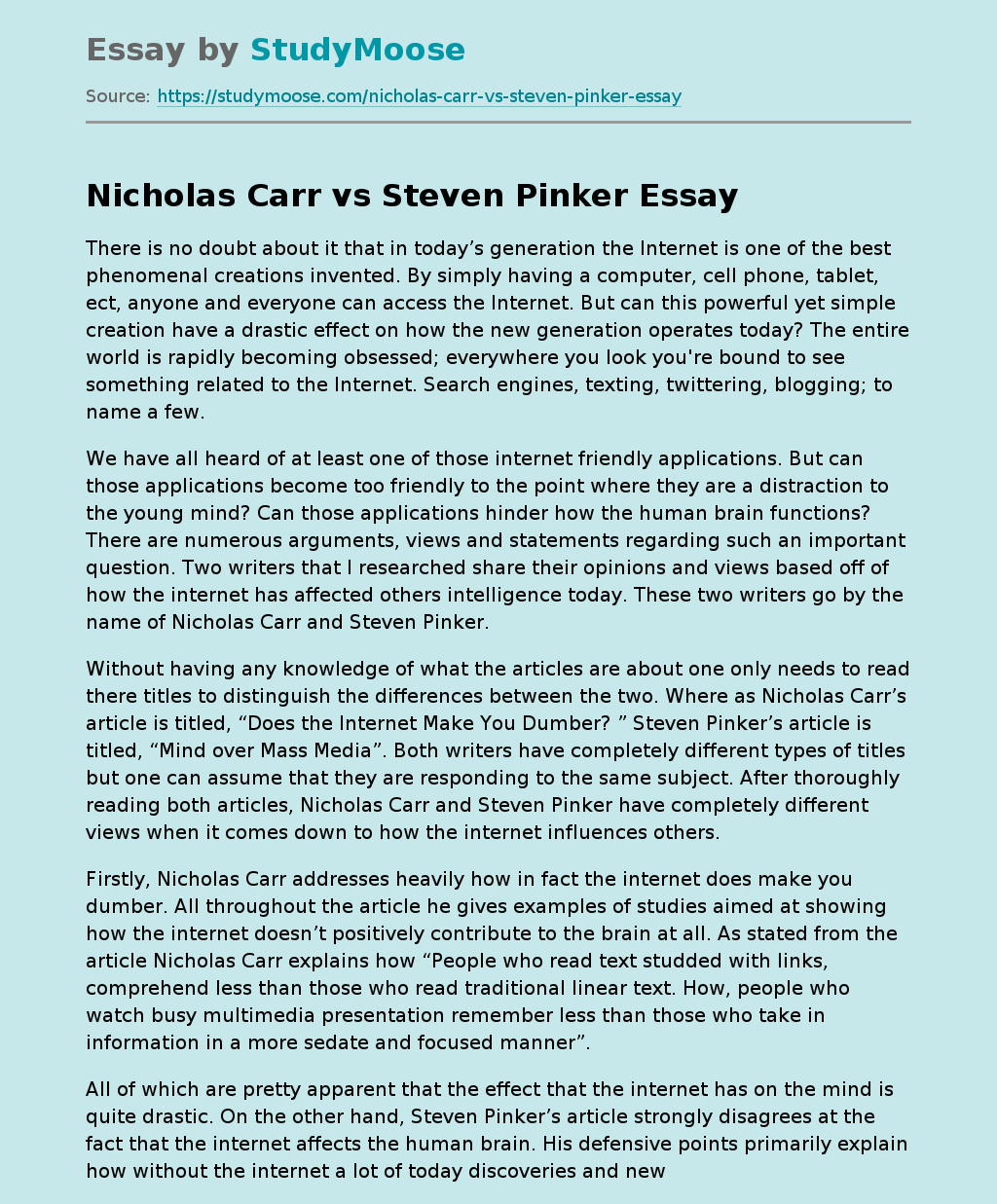