NFL Concussions and Their Long-Term Effects

On May 2, 2012, the National Football League lost one of its elite players to suicide: Junior Seau. Seau played for the Chargers, Dolphins, and the Patriots during his professional football career and was a 12-time Pro Bowler before retiring in 2009. Three years after his retirement however, Seau committed suicide by shooting himself in the chest with a gun. This greatly shocked the football world and its image of Junior Seau as a person, but it soon realized the cause for his action.

Don't use plagiarized sources. Get your custom essay on
“ NFL Concussions and Their Long-Term Effects ”
Get custom paper
NEW! smart matching with writer

Shortly after Seau’s death, researchers examined Seau’s brain and found that it contained a disease known as chronic traumatic encephalopathy which is formed by repeated blows to the head; a very common disease among former football players (Football Brains). The Seau family then filed a lawsuit against the NFL claiming that the league held back information from the players about the danger of continuous blows to the head (Seau’s Death on Brain Injuries).

Since the formation of the National Football League in 1920, the popularity of the sport has grown tremendously over the years.

It seems nowadays that more and more people are getting interested in the NFL, whether it is talking about their favorite team at work or at school or watching them play on game day. However, on the flip side of all the amazing catches and touchdowns, there is a dark side to the NFL known as the concussion problem.

This problem has grown so much over the years that there have been more than 4200 lawsuits by former and current players against the NFL stating that the NFL has been trying to cover up the detrimental long term effects of concussions and also relied on NFL doctors to feed them the information they wanted to hear while rejecting the studies done by researches showing the long term effects concussions have on the brain (Junior Seau’s Death Keeps Spotlight on Brain Injuries). In order for the NFL to keep thriving the way it is right now, the league had to reject the information shown by researchers which showed the harmful effects of concussions in the long run and instead had to hire their “own” doctors to say that concussions are minor and cause no detrimental long run effects. I believe that repetitive concussions do cause health problems in the future for NFL players and that the NFL covered up the truth about concussions.

Being that I watch the NFL regularly, it seems like it is almost guaranteed that at least one or more players will experience a concussion during the game with all the physical contact taking place. Some of the concussions these players experience are obvious in that they are motionless on the ground and some are not so obvious in that they are still able to make it to the bench. According to Jennifer Car of BrainFacts.org, a concussion is caused when the head is struck violently which then leads to a brief disruption in brain activity. When the head is struck suddenly, the brain is set in motion and bangs the skull’s rough and ragged inside which causes the brain cells to stretch and sometimes even split (Mild Brain Injury and Concussion).

Michael Collins, a clinical psychologist at the University of Pittsburgh Medical Center who specializes in sports-related concussions, states that “a concussion is basically an energy crisis to the brain cells” and he also states that “the brain has to work much harder to perform tasks” (Hard Knocks: The Science of Concussions). This disruption can cause an individual to experience a variety of different symptoms in the following minutes and hours. The range of symptoms includes the following: nausea, vomiting, brief loss of consciousness, and dizziness (Hard Knocks: The Science of Concussions). Later symptoms include: lightheadedness, depression, anxiety, ringing in the ears, constant migraine headaches, and poor concentration or attention (Mild Brain Injury and Concussion).

The symptoms mentioned in the previous paragraph may last a couple days to a few weeks; at most a few months. Those who experience these types of symptoms usually receive a concussion maybe once or twice in their lifetimes. However, those professional athletes competing in sports with a good deal of physical contact are in harm’s way of experiencing multiple concussions during their career as an athlete. According to recent research, scientists have discovered a neurodegenerative disease also known as chronic traumatic encephalopathy or CTE (Hard Knocks: The Science of Concussions). This disease was found in the brains of former athletes who have died mainly boxers and football players (What is CTE?). These athletes were those who have received continuous concussions or played in positions where they were vulnerable to experience a good amount of physical impact (Hard Knocks: The Science of Concussions). The repeated banging of the brain against the skull causes a gradual degeneration of the brain tissue, and also the forming of an unusual protein known as tau (What is CTE?). These activities in the brain can take place months or even years after the last concussion or retirement from the sport. Some of the symptoms associated with CTE include: memory loss, confusion, depression, aggression, hindered judgment, and dementia (What is CTE?).

There is definitely evidence of the symptoms of CTE among former NFL players. There are many examples of former NFL players who have suffered from CTE and have killed themselves and/or those around them including the Junior Seau suicide event that was mentioned in the opening paragraph. The first example is John Grimsley, who was a former Houston Oilers linebacker. Grimsley shot himself by accident while he was cleaning his gun one day (Football Brains). The former NFL player was a skilled outdoorsman and should have easily performed the task of cleaning his gun. A second example is Justin Strzelczyk, who was a former offensive lineman for the Pittsburgh Steelers. Strzelczyk was involved in a high-speed hit-and-run chase with the police which turned into a fiery crash where he eventually died (Football Brains). Another example is former Canadian professional wrestler Chris Benoit who murdered his wife and child and then took his own life (Football Brains).

The final example is Tom McHale, who was a former Tampa Bay Buccaneer. He died at the age of 45 from a drug overdose (Football Brains). All the brains of these former professional athletes were taken for study and all their brains were found to contain the brain disease CTE in them (Football Brains). Another study was done on the affects of repeated concussions causing CTE by Ann McKee. According to Ann McKee, who is a neuropathologist at Bedford VA Medical Center, “brains of patients with CTE have unique patterns of abnormal protein tangles and cell loss” (Hard Knocks: The Science of Concussions). Her study analyzed the brains of former athletes and war veterans who have experienced multiple brain injuries. McKee’s research showed that out of the 85 brains she has studied, 68 of the brains contained the brain disease CTE (Hard Knocks: The Science of Concussions). There is extensive research still being done by scientists in the area of CTE and if there is a connection between repeated blows to the head and the formation of CTE in the brain. In fact the National Football League has decided to donate $30 million to the National Institutes of Health’s Neurology Institute to help further studies on concussions among football players and military troops (NFL Donates $30 Million To Concussion Research).

More and more research and evidence on concussions is being brought to the fore front, as well as the numerous tragedies that occurred among former NFL players stemming from repeated concussions. Because of this, the NFL league and the NFL Mild Traumatic Brain Injury committee secretly decided to “cover up” and put down all the extensive studies and findings that have been recently popping up by scientists outside the NFL. In the PBS TV documentary League of Denial, the NFL is portrayed as a greedy money-driven industry that would do anything to keep the league from falling apart, even to the extent of withholding information from players about the long-term consequences from repeated blows to the head. In this film, the spotlight is cast on Dr. Bennett Omalu who was the first scientist to discover CTE (“NFL Concussion Cover-up”). His findings of CTE came from the brains of former Pittsburgh Steeler Mike Webster and his teammate Terry Long. Dr. Omalu’s findings were tremendously influential because it was the spark for the connection between repetitive blows to the head and CTE. However, as Dr. Omalu began publishing his findings about CTE in the brains of Webster and Long, the NFL soon noticed his findings and took action.

Dr. Omalu recalled a conversion he had with a NFL doctor in which the NFL doctor said, “Dr. Omalu, do you know the consequences of what you are doing? If 10 percent of mothers in America started to view football as a dangerous sport, it would be the end of football” (“NFL Concussion Cover-up”). This obviously shows that NFL doctors realize that the findings between multiple concussions and CTE are true, but they are reluctant to admit to it because they are afraid that the NFL will dissolve into nothing if the “truth” is discovered. The NFL realized that the league was in jeopardy so they decided to publicly denounce the findings of Dr. Omalu by saying that his work was flawed. However, this was not the only attempt that the NFL made it trying to put down the findings from scientists on the connection between repetitive concussions and CTE. In a 2007 meeting with the NFL’s Mild Traumatic Brain Injury committee, Julian Bailes who is the top neurosurgeon at the Northshore Neurological Institute, displayed several pictures of CTE that was almost certainly caused by frequent concussions.

However, the chairman of the committee downplayed all the evidence that was shown to them by Julian Bailes even though the evidence was pretty clear. The Commissioner of the NFL, Roger Goodell, decided that it was best for the league to conduct its own study about concussions. He released the following statements regarding the evidence being shown to the league by “outside” doctors and researchers, “You have to look at their entire medical history. To look at something that is isolated without looking at their entire medical history I think is irresponsible” (NFL Covering Up Research?). From just this one instance, we can definitely see that the NFL is trying its best to ignore the “clear-cut” evidence about the connection between repetitive concussions and CTE. It seems as though the Commissioner and the head of the NFL Brain Injury committee realize that the information and the research that was showed to them was true so they had to make sure it did not leak out to the players and also to the media.

NFL Concussions and Their Long-Term Effects. (2016, Mar 10). Retrieved from https://studymoose.com/nfl-concussions-and-their-long-term-effects-essay 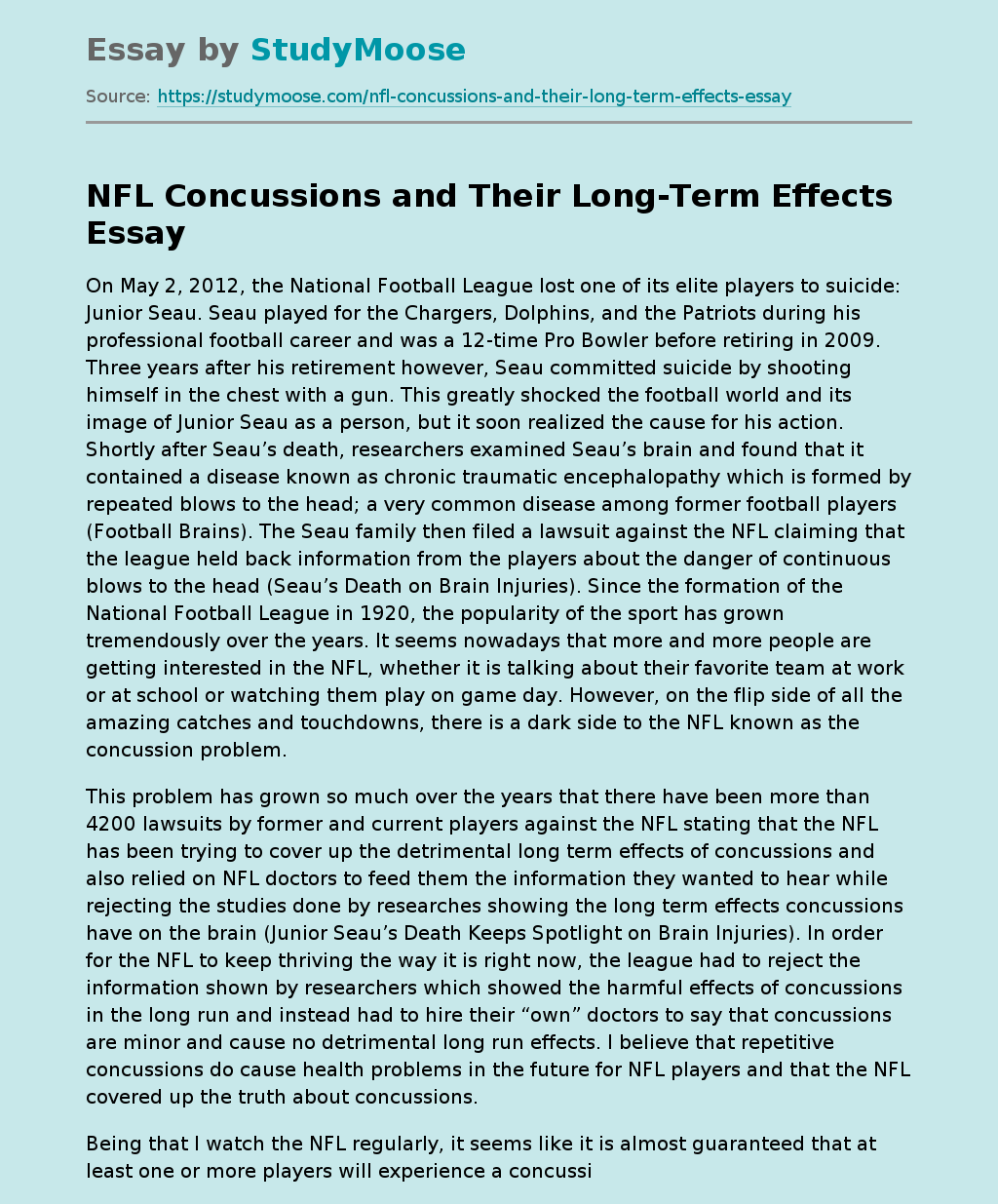