Ever since cars were invented in the early 20th century, there have been road fatalities. Advances in car safety technology have seen a diminishing exponential curve in casualties suffered on the road. The first invention was the seatbelt, by George Cayley in the late 1900s. The next major advance was with the airbag, by John Hetrick in 1952. A patent for the design was marketed for automobiles in 1967. The combination of all safety devices located in cars contribute to the wellbeing of the driverThe idea of a seat belt is simple, but it harnesses technology that shows a lot of ingenuity.

A seatbelt is designed to keep one fastened in their seat in the event of an abrupt stop. It is essentially a piece of tough fabric that goes around the user. It combats the effect of the separate inertia on ourselves, by making us a part of the car. Inertia refers to an objects tendency to maintain its state of rest or uniform motion unless acted upon by a force.

When the car is in motion, inertia wants it to keep going at that speed, but there are several forces acting on it, such as friction and air resistance. The engines power compensates for this energy loss. Anything that is in the car but not attached to it has its own inertia, and this is evident when the car is accelerating, decelerating and in the event of an abrupt stop. When in uniform motion, one cannot feel the effects of the cars inertia as separate to oneself, but the separate inertia is shown when the car is stopped suddenly.

In a high speed collision, each car comes to a stop rapidly. Occupants not wearing their seatbelt will continue at the original speed of the car (as per the Law of Inertia) until acted upon by a force. An unrestrained occupant will then move at a high speed until:Colliding with the car interior or other occupants, stopping faster than the car itself, most of the time over a distance of several centimetres.

Crashing through the windscreen. This concentrates an amazing amount of momentum [(momentum=mass x velocity)(M=70kgx90km/h)(M=6300)] on one of the most vulnerable parts of the human body.

Impulse is defined as the product of the force and the time interval over which it acts. It is equal to the change of momentum. With a seatbelt on, one will change their momentum slower and therefore spread out the force acting on them. This significantly increases the chance of survival.

An occupant with a seatbelt will have the same inertia of the car, & therefore stop with it. The rate of change of the momentum of a restrained occupant is much less than that of an unrestrained person. This means that the net force on the restrained occupant will be less. As well as increasing the time interval over which the wearer comes to a stop, a properly fitted seatbelt spreads the impact force over a larger surface area of the body, in particular the pelvis & ribcage.

Seatbelts are an extremely effective means of saving lives. Car accident researchers in Australia estimate that seatbelts reduce the risk of fatal injury to front-seat occupants by 45 per cent and the risk of serious injury by 50 per cent.

Airbags are designed to increase the time interval during which the drivers momentum decreases during a head on collision, therefore reducing the net force on the driver, particularly from the steering wheel & dash board. It also acts to cushion our precious head during impact.

An airbag consists of 3 parts which all assist in slowing the passengers forward motion:The bag made of a thin nylon fabric, which is compressed in order to fit into the steering wheel etc.

The sensor The device that tells the airbag to inflate, in the event of a collision. The sensors receive information from an accelerometer built into a microchip.

When an airbag is deployed:15 20 milliseconds after impact: The crash sensors & control unit determine the severity of the collision. This decides if the airbag will be deployed or not.

45 milliseconds: The airbag is fully inflated while the occupant is still moving forward.

60 milliseconds: The occupant makes contact with the airbag, which immediately begins to deflate.

Up to 100 milliseconds: The occupant continues to sink into the airbag, cushioning the head & chest while deflating.

Momentum is the product of mass multiplied by velocity. Unless an outside force acts on an object, it will continue to move at its present speed & direction. If loose objects in the car are not restrained, they will continue moving at the same speed as the car, even if the car is stopped in a collision. Therefore by reducing our velocity using the airbag, one will have less momentum, & therefore a greater chance of survival or serious injury.

Air bags do not just cushion your body in the event of an impact, but they also spread the impact over a larger area. By doing this, the force is not all concentrated in one small area of your body. This in turn will cause the seriousness your injuries to be reduced because the force you feel is spread out.

A study stated that the number of lives saved by airbags is 600 per year. It also indicate that airbags reduce fatalities by 8% when worn in conjunction with a seatbelt. Airbags also reduce the risk of dying in a frontal crash by 30 %.

Wearing both a seatbelt and having an airbag fitted car deeply increases the survival rate in the event of a crash.

Crumple zones are deliberate weak spots the car engineers place in the structure of a car. Consider a head-on collision into a concrete wall. Before the crash, the car & its passengers move together at the same velocity. With a car posing a rigid body, an impact will cause both automobile & occupants to halt very quickly. This immediate stop creates a large amount of force on the passengers. [(F=ma)(F=75kg x -30km/h-2 )(F=2250N)]. By increasing the impact time, the force on the occupants is dramatically reduced, because of this cushioning effect.

Newton’s first law (a body will continue its state of motion unless acted upon by a non-zero net force) is another law that explains how crumple zones work in the face of an accident.

As the car strikes the wall, the front part crushes together. As the front of the car is absorbing the impact, energy from the impact is given off in the form of heat and sound. Because the front of the car acts as a cushion, it slows the time it takes for the car to come to a complete stop; this will apply less of a force on you.

The graph above illustrates how force changes as time changes with the use of crumple zones. The better the crumple zone, the more effective it is in increasing the time of a collision.”Collapsible steering wheels also aid in ones survival chance in the event of a collision. It reduces the risk of impaling the driver by folding away when force is acted on it. When the body is thrown forward by the effect of inertia, the steering wheel becomes less of a deadly obstacle.

Luggage restraining barriers help, in the event of a crash, by stopping the luggage that will move forward because of its own inertia. 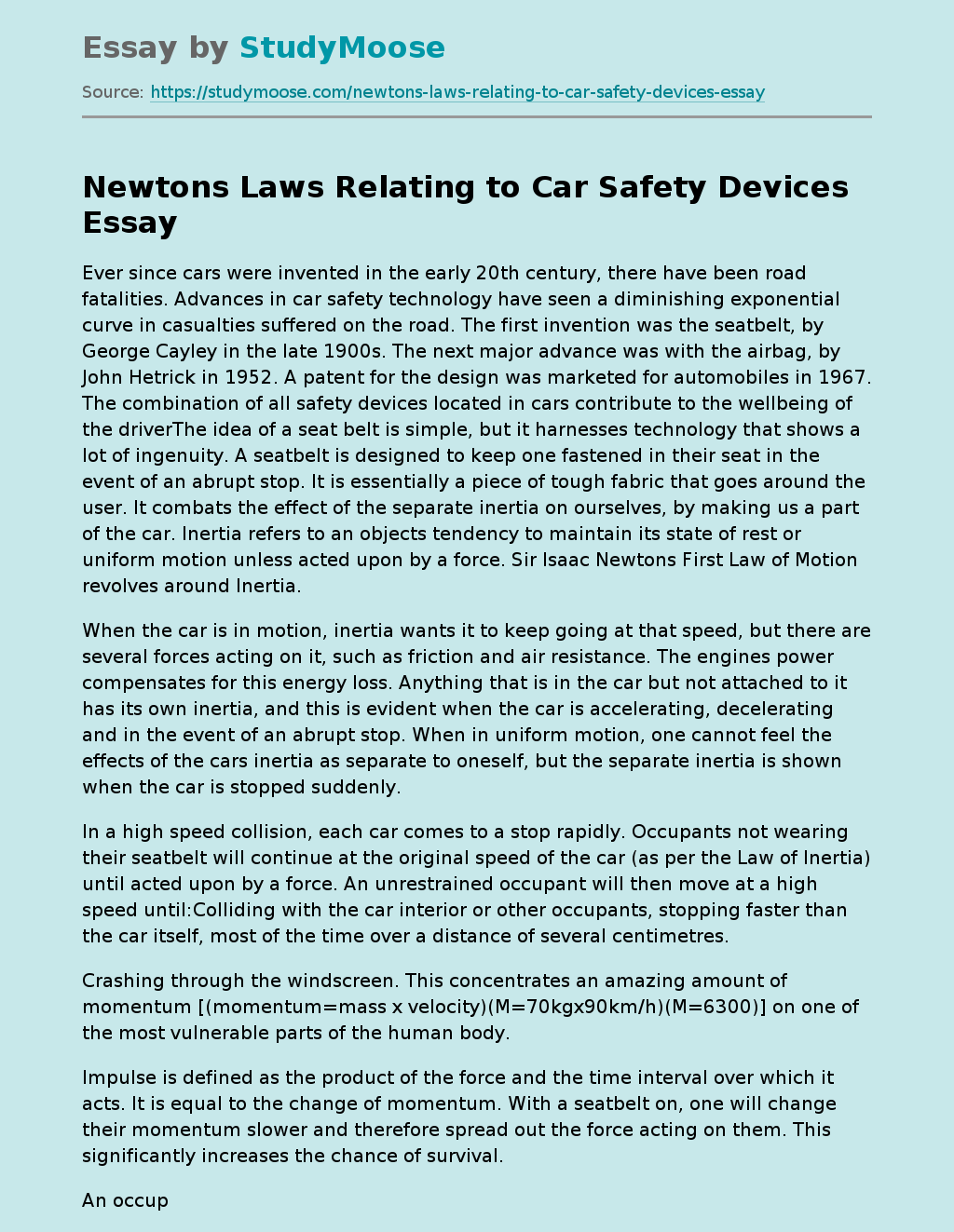