Newspaper and books have long been a medium for information transfer and dissemination. The printing press and the printing industry have been around for centuries, and have become the major tool for communication and information. They have been the most popular medium for shaping public opinion. Their credibility, knowledge, values and information-gathering skills remain a formidable force on the high street, and with titles now separated into sections with more lifestyle content, their potential for brands has increased further – online and offline.

Don't use plagiarized sources. Get your custom essay on
“ Newspapers and Books outdated? ”
Get custom paper
NEW! smart matching with writer

The success of newspapers largely boils down to a single truth: they are effective in shaping opinion. They possess a large amount of power when it comes to public perception. For many, newspapers are the most reliable form of news and information, backing up this information with credible opinion and insight. It is this level of trust that leads to readers spending a huge amount of time reading their newspaper with two thirds of readers at least three quarters of the content, impacting millions of people.

Technology has many great functional purposes, which aid in our daily lives. As more and more people start embracing these functions, books are slowly being replaced. A total of 2,267,233,742 people use the Internet alone that constitutes 32.7% of the world’s population. New technology is thought to be very empowering. We live in an information society where the leading role has been given to new technologies, especially those devoted to information. This is a very threatening prospect for books and newspapers. As we try to understand information, to separate it from judgement, to establish fact, we find ourselves in a free fall: we bring to information, to judgement, to ‘fact’, our opinions and views which are in part created by the very manifestations of information, news and opinion that we consume.

The Internet and other forms of the new media shape this very information. Also, more and more people are using technology.

Whether they want it or not, technology is not only becoming a mandatory part of their jobs, but their children are bringing it into their homes. The increased sophistication of operating systems (e.g.Windows) and of the applications written for them lower the barriers to learning how to use technology. The catchword of these new tools is intuitive (as in, “this new application has a number of intuitive, easy-to-use features . . .”). The plain fact is that people are using more technology because it enables them to do more with less. Compare the process of performing manual research using books with the process of using a computer. Computer-assisted research usually takes a fraction of the time and, consequently, money. Thus with the aforementioned points, one could argue that books and newspapers are a thing of the past as we move into the twenty first century.

However, one could argue that books and newspapers are in fact creating something new, blurring the lines of old and new media. Perhaps one cannot judge a book by its cover, but there is a wealth of information to be gleaned from its interior. As we embrace the Internet and other new technologies, newspapers and books are beginning to blur the line between old and new media. The new media is not here to replace the old media; in fact, there are possibilities of linking the new media to form a ” whole new art form “. Books and newspapers possess the enduring role in shaping habits of thoughts, conduct, and expression. At the same time, it draws attention to the ways in which the social, economic, and material coordinates of books have been changing in relation to other media, denser forms of industrial organization, shifting patterns of work and leisure. These two forms of media seek a broad audience for a typically narrow (and often biased) message that’s typically embedded in entertainment or useful information/opinion.

Mass media communication is expensive, so it’s funded through participant admissions/subscriptions and contributions, or through sponsorships and advertising (or a combination of these funding sources). It thus must provide something sufficiently valuable to its potential audience to gain that necessary financial support. Emotional arousal created by these media drives attention, which drives learning and conscious behavior – so it’s important for media programmers to understand and present content that will emotionally arouse potential participants. The media thus exploit areas of strong emotional arousal to help shape our knowledge and opinions. The content covered in these two forms of media potentially shape our thought and opinions. Newspapers and books may exist physically as old media but the content within lets newspapers and books coexist as new media. Therefore, with the aforementioned points, books and newspapers are not deemed as outdated.

Books are artifacts with a deep and abiding history that belong in and to our own age-no more and no less so than flat-screen televisions, MP3 players, computers, and other so-called cutting-edge technologies, they keep us in tune with the rest of the world. Janice A. Radway, an American literary and cultural studies scholar, quoted that; printed books and newspapers “do not appear miraculously” in people’s hands. “They are, rather, the end product of a much-mediated, highly complex, material and social process.” (Radway 93) Integral to this process, is distribution. Developments in this perhaps more arcane aspect of the circuit of culture have paralleled transformations in the more closely scrutinized domains of book production and consumption.

The everydayness of books belies a long, complicated, and still unfinished history, one intimately bound up with all of the following: a changed and changing mode of production; new technological products and processes; shifts in law and jurisprudence; the proliferation of culture and the rise of cultural politics; and a host of sociological transformations, among many other factors. The history of books go further beyond than just writing down a story, it consists of much more and people should learn to cherish that fact. Thus with the aforementioned points, books and newspapers are not outdated.

The normative role of newspapers-setting a community agenda-remains essential, but the ways in which the newspapers fulfill this function are in constant transition. All media are about relationships. We are connected with community by means of our contact with media, including other people, who also are a form of media after all. Communication scholar Keith Stamm argues that “children are a [medium of connection] between families and the school system.” (Stamm 100). Similarly, news media connect us to the communities to which we belong, or want to belong. Likewise, the World Wide Web is not just a medium about information but about relationships-a way for individuals to connect with other individuals. Audiences have historically connected with their community by means of newspaper agendas. Audiences, who collectively or individually adopt the newspaper agenda of issues as their own, meld with their local community.

Sharing media agendas means that different types of people-men versus women, old versus young, rich versus poor-become more focused on the same public issues, suggesting that one function of news media is to draw disparate individuals around selected public issues. That role has been important for the newspapers since our colonial beginning and is likely to remain so in the twenty-first century. In modern times, newspapers have proven important platforms to examine the performance of contemporary institutions, such as the _Washington Post_ investigations of the incidents surrounding the Watergate break-in during the administration of President Richard Nixon in the early 1970s. Newspapers reflect the community dynamic, and the future of newspapers is linked to the future of communities. Therefore, with the aforementioned points, books and newspapers are necessary in society and are not outdated.

In conclusion, books and newspapers have many deep hidden qualities that people cannot see from the surface, they provide us with essential information, they have a deep abiding history, they blur the lines between old and new media. Although it may seem as though technology is replacing newspaper and books, it is not necessarily true as newspapers and books are needed in society and they cannot be outdated. 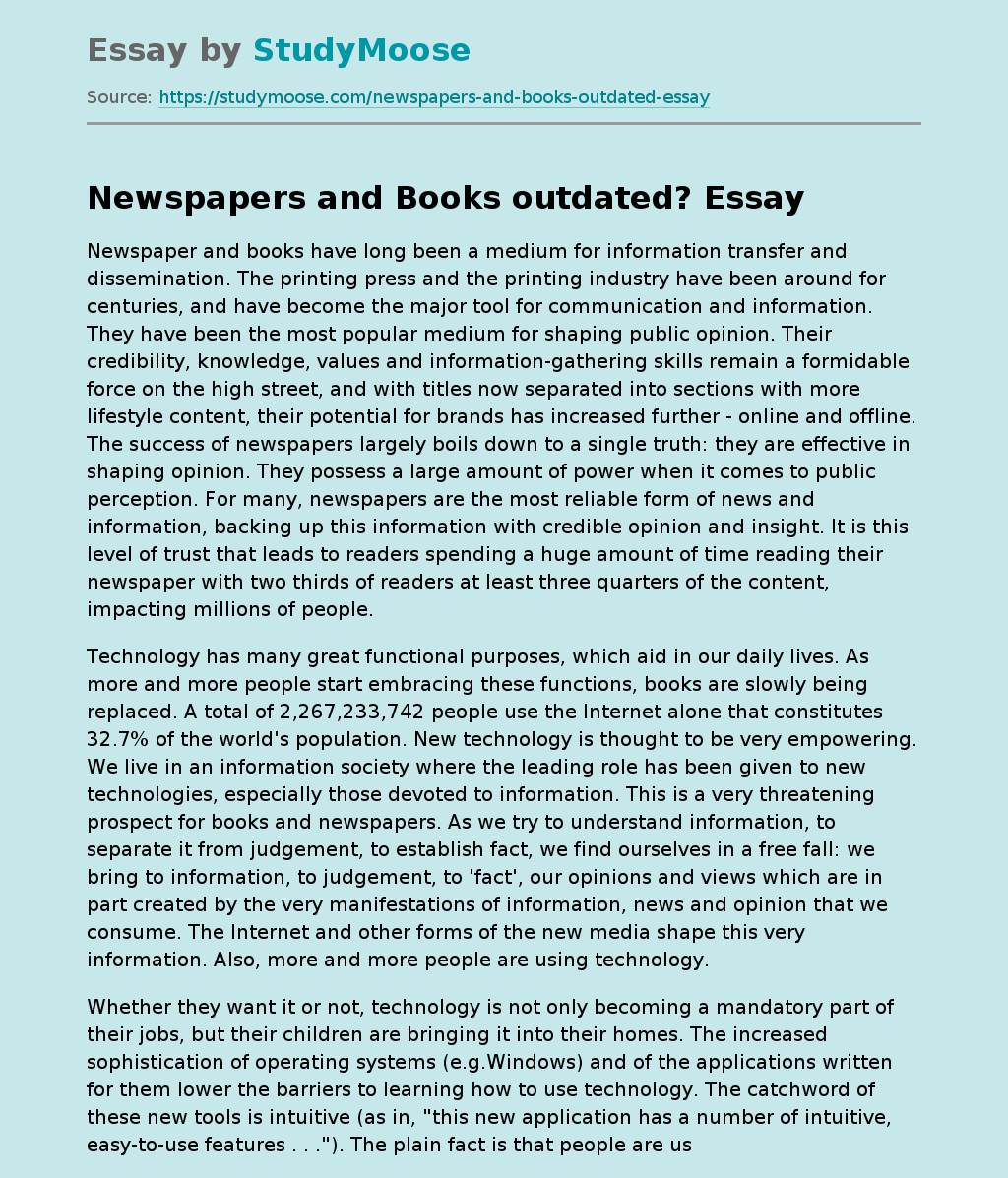